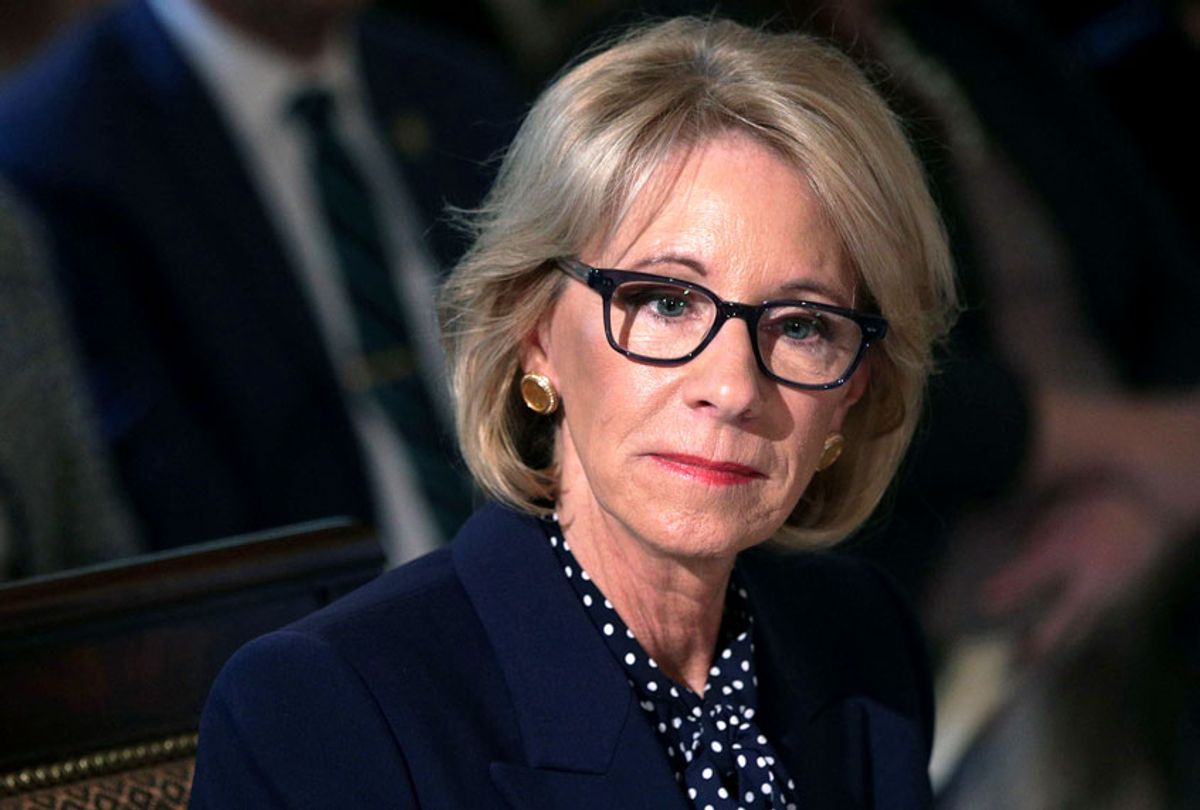 Education Secretary Betsy DeVos overruled career staff at the department’s Borrower Defense Unit, deciding to force student borrowers to partially pay back their loans even though they had been defrauded by for-profit colleges, according to documents obtained by NPR.

More than 200,000 borrowers called for the U.S. Department of Education to cancel their federal student loan debt under a rule called “borrower defense” after they alleged that several for-profit college chains lied to them about their ties to employers and the transferability of credits. DeVos decided that students still got value from the colleges that had defrauded them, and argued that they should only get partial federal loan relief.

Internal memos obtained by NPR show that career staff at the department’s Borrower Defense Unit strongly argued that the debt should be forgiven entirely, only to be overruled by DeVos.

The memos show that Borrower Defense Unit staff recommended, just weeks before DeVos took over the department, that students defrauded by Corinthian Colleges and ITT Technical Institute, among others, deserved to have all their student debt canceled.

One 2017 memo said that Corinthian Colleges “consistently represented that all graduates obtained jobs after graduation or, relatedly, that its students were guaranteed employment after graduation. These representations were false and misleading. Accordingly, the Borrower Defense Unit recommends full relief for Corinthian borrower defense (BD) applicants."

A memo drafted the following day came to the same conclusion on ITT Technical Institute.

DeVos accused the Obama administration of trying to “prove blanket relief without review of the facts or evidence” in a letter to the House Education Committee but the memos show that there was an extensive review of the evidence against the college chains.

"Hundreds of unprompted student statements confirm that lack of value of an ITT education, as ITT students time and again report that their education was sub-standard and that their degree or affiliation with the school was an impediment rather than an asset as they sought employment," said a Jan. 10, 2017 memo obtained by NPR. "Given this extensively well-documented, pervasive, and highly publicized misconduct, the Department has determined that the value of an ITT education — like Corinthian — is likely either negligible or non-existent. ... Accordingly, it is appropriate for the Department to award eligible borrowers full relief."

The memos included quotes from borrowers who said that after graduating from these colleges “employers will not touch me” or “people just laugh in my face.”

DeVos has repeatedly come down on the side of for-profit colleges. She argued in a speech in 2017 that while students “should have protections from predatory practices” the schools “should also be treated fairly.” She ultimately decided that the department would use borrowers’ income data to determine how much debt relief to provide in individual cases.

That decision was blocked by U.S. District Court Magistrate Judge Sallie Kim of San Francisco, in a May 2018 ruling. Kim held that the use of income data violated privacy protections and ordered the department to stop collecting the debt of some students defrauded by Corinthian Colleges.

DeVos was held in contempt of court, fined $100,000, and threatened with jail after the court learned that the department tried to collect debt payments anyway.

DeVos announced a new plan on Tuesday that once again seeks to “water down” the debt forgiveness program, The New York Times reported.

Thousands of students defrauded by these colleges will still have to pay part of their debts under a “complicated sliding scale” that determines how much relief students will get based on group earnings data, according to the report.

Students will only have their debt entirely forgiven if “students in a particular program earned far less than those from similar programs at other schools,” according to the Times. Students who have lower earnings will receive partial relief between 25 percent and 75 percent of the total of their federal loans.

The new policy comes after the department changed the borrower-defense rules in August, making it even harder to qualify for relief.

DeVos said the new policy was necessary to prevent “giving away taxpayer money to those who have submitted a false claim or aren’t eligible for relief.”

“Under law, cheated students have the right to have their loans fully canceled,” she told the Times. “This partial denial scheme will force thousands of families to pay fraudulent debts that never should have existed in the first place.”

A group of students defrauded by the now-closed colleges wrote a letter to DeVos on Tuesday calling the new policy “a slap in the face.”

“Student voices have not been involved in the process,” the letter said. “Meanwhile, the for-profit college industry had seats at the table every step of the way.”

The Education Department defended the move in a statement to NPR.

"'Full relief' sounds nice, but it really means 'full liability' for taxpayers — and that's not fair in cases where a borrower is not entitled to it,” said department press secretary Angela Morabito. “That's why it's imperative that we consider each Borrower Defense claim individually. To force taxpayers to provide blanket forgiveness would be abandoning our duty to be good stewards of tax dollars. The Department will provide student loan relief to those who qualify for it."

Democrats blasted the latest policy change and the revelations in the memos obtained by the outlet.

“She continually refuses to do her job and does not stand with students,” said Sen. Patty Murray, D-Wash., the top Democrat on the Senate committee that oversees education.

“Betsy DeVos has been actively working against our students — harming their education, financial well-being, and safety — since Day 1,” wrote Rep. Barbara Lee, D-Calif., who sits on a House Appropriations subcommittee that oversees education spending. “She has no qualifications for her role, and never should have been confirmed. She needs to go!”

Sen. Bernie Sanders, I-Vt., said the leaked memos show that DeVos “will go down in history as the worst Education Secretary to ever hold that office.”