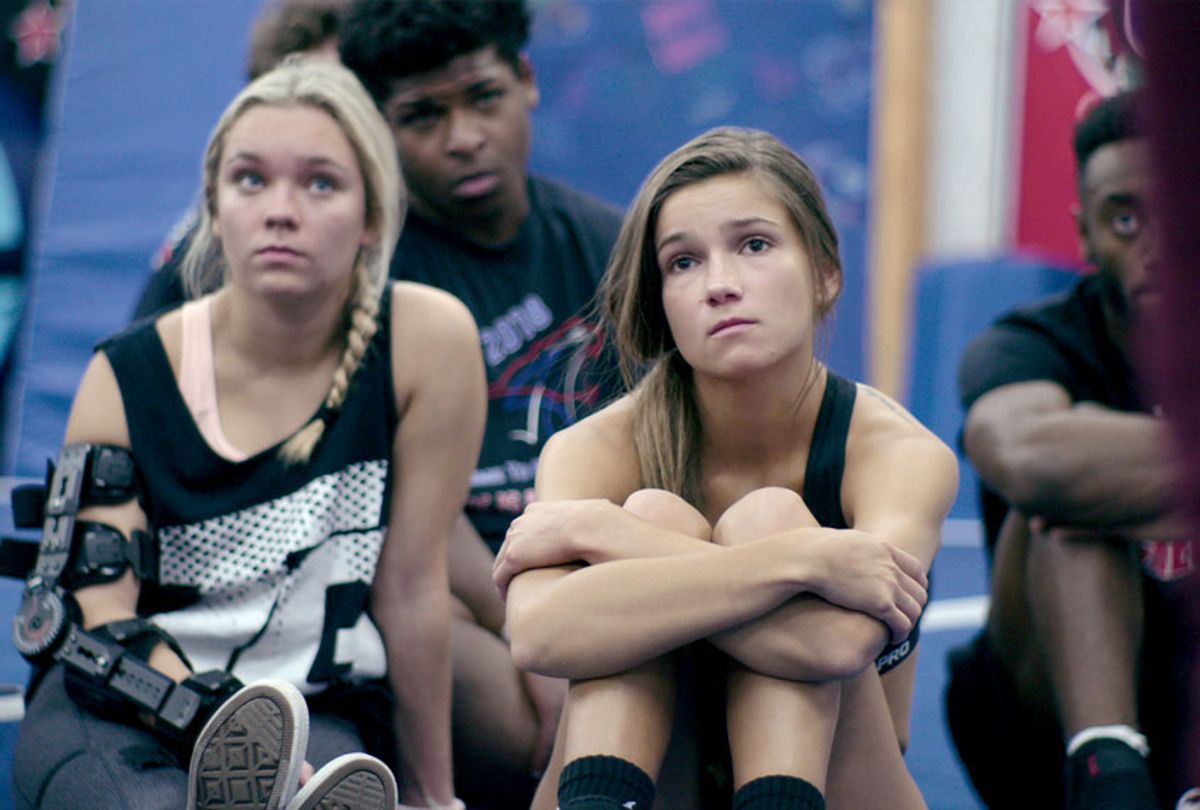 The "Cheer" GIFs taken from Netflix's docuseries about the high-flying, competitive Navarro College Cheer Team began popping up a few weeks back. These little videos on loop shows the team members flipping and twisting, Jerry "mat talking" and — in one particularly rough case — the squad just flat-out dropping a cheerleader. Sherbs, a top-level flyer, plummets from the sky and, with no arms to catch her, hits the ground elbow-first. In real life, she dislocated her elbow, but the GIF is now internet parlance for just totally missing your shot.

Then came the "Saturday Night Live" sketch spoofing the series. "We throw people high, high, high in the air," declares Heidi Gardner in the character of no-nonsense Navarro coach Monica Aldama. "And sometimes we drop, drop, drop them." Over the course of four minutes, Gardner and Adam Driver (who manages to pull off a rust blonde wig surprisingly well), observe a series of cheerleaders in increasingly elaborate body casts.

The main punchline includes pop star Halsey finally unsticking herself from the ceiling and falling to the mat, uninjured, like some kind of angel of cheer, and that's when it was apparent — the Navarro Cheer team had effectively become a pop culture meme.

Cheerleading is a sport that has always been weighed down by decades of cultural caricature. It's a sport of mean girls, bubbleheads, and Miss Popularity (and perhaps Promiscuity); but the viral Netflix docuseries "Cheer," which follows the Navarro team as they prep for a 14th title at the National Cheerleaders Assocation (NCA) College Nationals in Daytona, challenges those misconceptions.

"I was just so stunned by the intensity of the practice, and also how aggressive and impressive the stunts were in practice," said director Greg Whitely. "They are the toughest athletes I've ever filmed, and I don't think that was something I would have thought would be true before I started exploring this world."

And when watching the series, there is no question about the skill of the team members, so I was initially a little shocked at the eventual meming of the show. While "Cheer" is technically a docuseries, it also falls into the reality series category, but isn't like the traditionally fluffier series that are either voyeuristic – like your "Real Housewives" or "Below Decks" – or inspirational / competition series, such as "RuPaul's Drag Race," "The Bachelor" or "Queer Eye." Those series are more straightforward entertainment, not as informational, and therefore they present more formulaic, predictable characters who become a stand-in for certain emotions. Take "Queer Eye," for example. Tan France is good for a withering disapproval GIF, whereas Jonathan Van Ness is good for a "yas girl" empowerment meme.

I mean, sure "Cheer" has some colorful personalities (the show would be a drag otherwise), but these are real, hardcore athletes, many of whom have overcome tremendous personal circumstances, which are laid out in detail, to even be on that mat. I expect GIFs and parodies for those shows mentioned above, but "Cheer," which has been something of a sleeper hit, was not one that I could've predicted would get this treatment.

Cheerleading is an unquestionably performative team sport, but viewers responded more immediately and viscerally to the individual's performances off-mat.

But then I realized — the virality of "Cheer" seems to have less to do with the beliefs viewers have about cheerleaders as athletes or cultural symbols, and more to do with how we watch television and the ever-fuzzier line between reality television and docuseries.

Reality television is a genre in which viewers are primed to look for characters. This was true in PBS'  1973 series "An American Family," it was solidified in 2000 when "Survivor" debuted, and it has carried into contemporary programs like "Keeping Up With the Kardashians" and "Big Brother." Hell, even when watching "Blown Away," a show about competitive glass-blowing, I remember texting my boyfriend, "I've already found the show's villain."

We're all aware that these shows are cast to have personalities.

Meanwhile, there is still sometimes a misconception that documentary equals unfiltered truth, and that the people featured within them are objective talking heads, devoid of any motivation outside the recollection of real-life events; just as the filmmaker is simply there to capture their words and actions.

Perhaps this is born out of the cinéma vérité movement that picked up in the '60s — a style defined by a certain fly-on-the-wall rawness. It's the same style that filmmaker Errol Morris, who directed the seminal documentary "The Thin Blue Line," balked against. Sietse Meijer of the International Documentary Film Festival has written that Morris was 'deliberately 'anti-verité.'"

He's used re-enactments, dramatic coloring and music and animations, all completely cinematic elements. But as Meijer writes, Morris has maintained that the things people say are often the only true documentary elements in his films — the idea being that when people are allowed to speak, they reveal who they really are. (And who are we at the end of the day, but characters of our own creation?)

Regardless, full-length documentary films and reality television are often presented like two opposite poles on a spectrum; a theory that docuseries both illuminates and upends. While "docuseries" was, per Merriam-Webster, first used in 1988, the term really seemed to take off with the advent of shows like "Making a Murderer" and "The Keepers."

Like documentaries, these series' purported purpose is to get to the bottom of their respective criminal investigations, but they were presented in an episodic format that is more often associated with weekly television.

And like reality television, viewers began to identify and form allegiances to certain subjects; since these are true crime shows, some of the heroes and villains are self-evident (though not always), but some surprising characters also captivated people. I think of Steven Avery's defense attorneys who emerged from the show's first season as unlikely sex symbols — catupulted into that position by countless heart-heavy Tumblr pages and thirsty tweets.

We watch these shows to be informed, sure; but we also watch them to be entertained, and a well-rounded cast of characters are inherent to that enjoyment. Even when watching programming about surprising topics, we seem to crave a predictable cast of characters. The HBO documentary short "Well Groomed" is a perfect example of this. Yes, it's about the weird world of creative dog grooming, but it's more about the humans who inhabit that world and their respective roles: the industry veteran, the hungry newcomer, the disgruntled competitor who can't make it to the podium.

Considering this, "Cheer" is no different, something that director Greg Whitely alluded to in our interview following the show's release.

"For a show like this, where you've got six episodes, you are really telling a six-hour movie with six chapters," Whitely said. "In doing that, we've learned that you've got to focus on three or four — maybe five — main characters. Anything beyond that, and you're starting to give characters and their development the short shrift."

He continued: "So we started to identify who we thought those three to five people were going to be, you start to just think 'Okay, let's get to know them, what are their backstories? What is it that makes them tick? What do they want and what's getting in the way of what it is they want?'"

From that emerges our cast of characters: Gabi Butler, the "cheer-lebrity"; Jerry Harris, the sweetheart from a tragic background who just wants to perform; Lexi Brumback, the girl with a troubled past who you just hope stays out of trouble; Morgan Simianer, whose parents left her to raise herself until her grandfather stepped in; Monica Aldama, the intense coach whose strict structure inspires an unwavering loyalty from her team.

And I guess therein lies both the limitations and the beauty of this media format. There are injuries. There are tears. There are death-defying stunts and petty college drama. The team is racing against the clock and after a while, you know what the next move from our characters' is going to be. They are imperfect and often predictable, and yet — by the end of it all, we're the ones cheering them on.

"Cheer" is currently streaming on Netflix.