This cracked "mystery" empanada is filled with chicken, mushroom, and cotija

Always versatile, the fried savory goodness of an empanada gets several layers of umami in this recipe 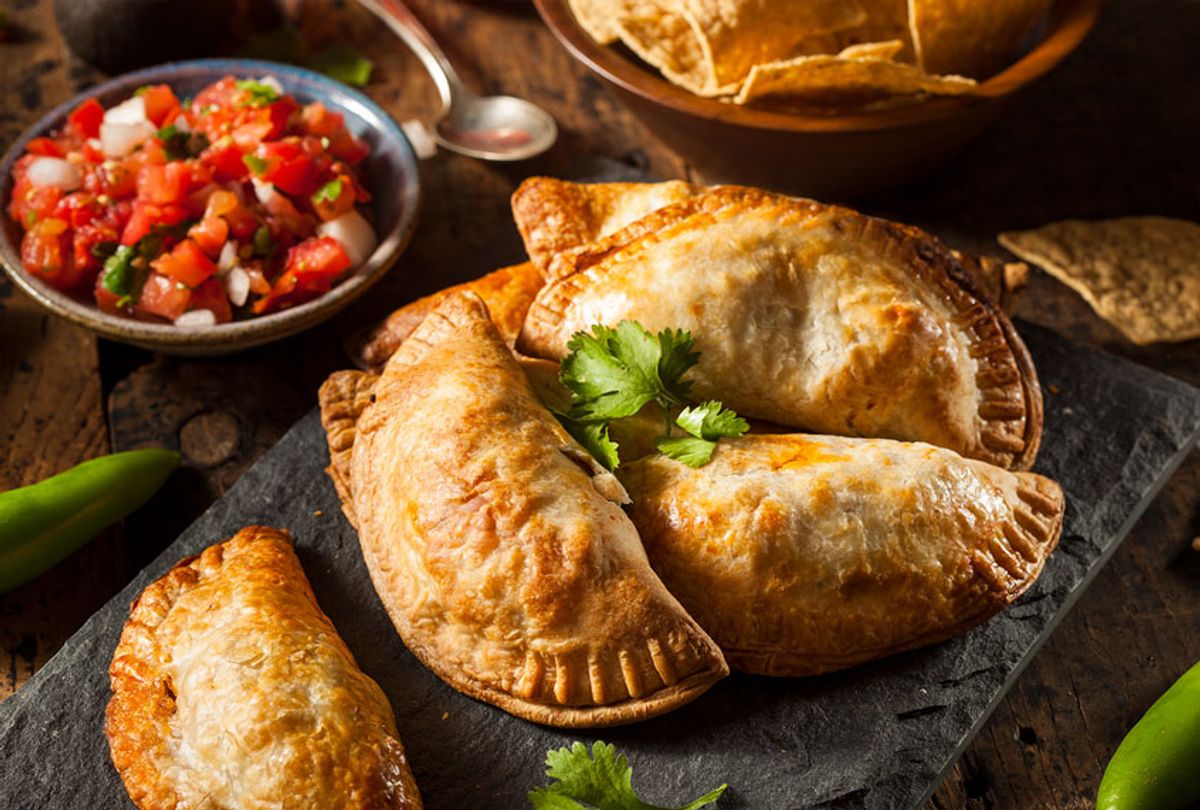 There's a lot to love about empanadas, the stuffed pastry filled with savory goodness. There's the way that, when you first take a bite, the crust cracks open and, for a brief moment, fills your mouth with steam before the filling hits your tongue. There's their inherent portability (I've been known to double-fist empanadas while on the run). But most of all, I appreciate empanadas for their versatility.

Once you have a dough recipe down, you can really get creative with fillings. This recipe is inspired by a "mystery empanada" I had at Julie's Empanadas in Washington, D.C.'s Adams Morgan neighborhood. The tiny shop — which advertises their "baked with love" creations on a series of cheerful yellow, plastic banners — has a pastry case filled with standards like Chilean-style ground beef and olive empanadas and chorizo empanadas.

But each week the bakery also produces a "mystery empanada," with a rotating variety of ingredients. The version I tasted included savory mushrooms, ground meat, cheese and a shock of fresh herbs. This recipe uses cremini mushrooms, ground chicken, and diced chicken livers, cotija cheese, and parsley.

Combine the masa harina, flour, baking powder and salt in a large mixing bowl. Chop butter into cubes and then add to the dry mixture, mixing with your fingers until it takes on the texture of coarse crumbs. Add the cold water a tablespoon at a time, working the mixture until it becomes a dough that can be formed into a smooth ball. Wrap that ball in plastic wrap and store it in the refrigerator.

In a skillet, add two tablespoons of schmaltz, garlic, the minced shallots and the mushrooms. Cook over moderate heat until the shallots are slightly browned and soft. Remove from heat, place in a large bowl and reserve.

To that same skillet, add the livers and an additional tablespoon of schmaltz. Cook over moderate heat for about 15 minutes, turning occasionally. Take them off the heat and allow them to cool. Once cooled, roughly chop the livers (you can also pulse them in a food processor, just make sure not to puree them too smoothly. You still want some texture).

Add the chopped livers to the bowl with the mushroom mixture and combine.

Finally, add the ground chicken to the skillet with 1 tablespoon of neutral oil. Cook over moderate heat until fully cooked through and slightly browned; add to the liver and mushroom mixture and combine.

To that bowl, add the paprika, salt and pepper, cumin and cayenne pepper. Stir until completely combined, then add parsley and cotija cheese.

Remove the dough from the refrigerator and divide it into 12 evenly portioned balls. Using a tortilla press or a rolling pin, flatten each ball into a 6-inch circle.

Spoon a generous tablespoon of the filling into each circle. Fold the empanadas in half and seal the edges with your fingertips or the tines of a fork.

In a large skillet, heat about an inch of neutral oil. Fry empanadas a few at a time — about two minutes on one side and two minutes on the other. Drain on paper towels and allow to cool. Meanwhile, pulse the sour cream, mayonnaise, ranch seasoning and a chipotle pepper in the blender. Serve the empanadas with this chipotle ranch.