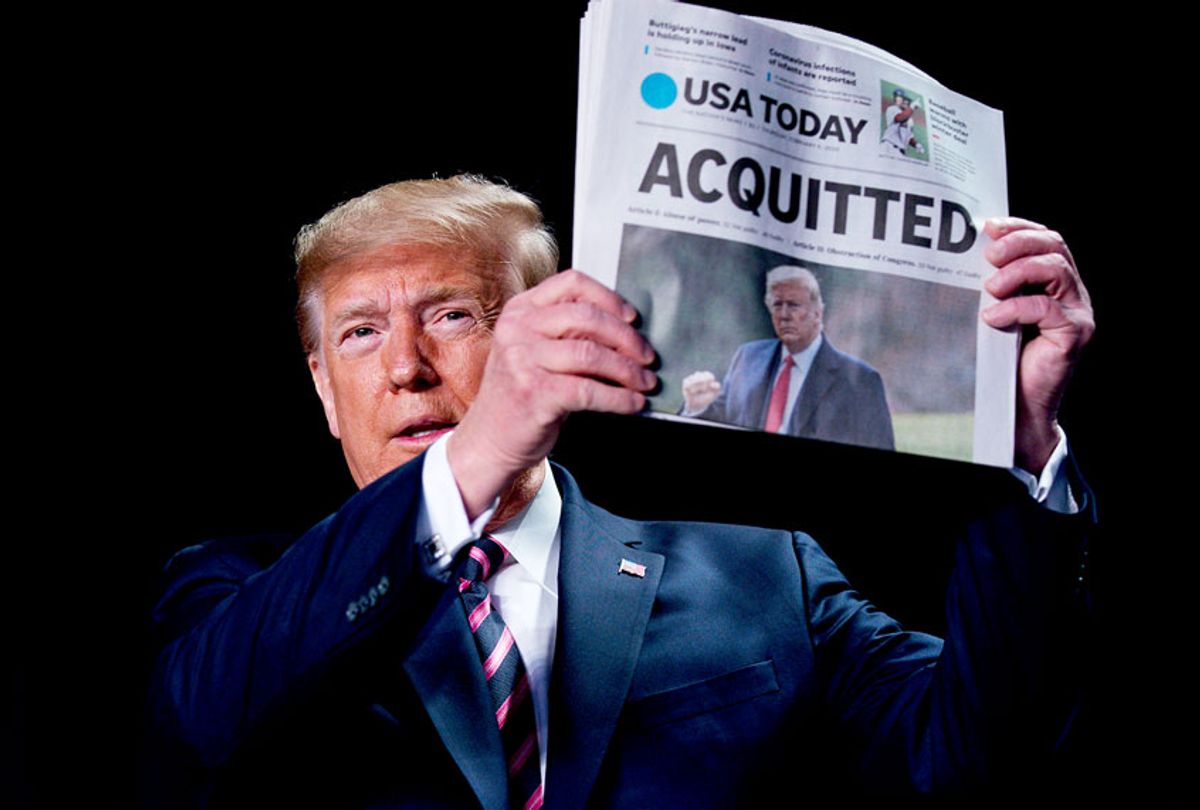 President Donald Trump holds up a newspaper with the headline that reads "ACQUITTED" at the 68th annual National Prayer Breakfast, at the Washington Hilton, Thursday, Feb. 6, 2020, in Washington. (AP Photo/ Evan Vucci)
--

A group of psychiatrists urged Congress in a letter Wednesday to invalidate President Donald Trump's acquittal in the Senate until his mental competency to stand trial is evaluated.

The letter was sent by the World Mental Health Coalition, an association of mental health professionals sounding the alarm on the risks posed by the president's mental health. A copy of the coalition's letter was provided to Salon.

"Under well-established principles of justice in the United States, a defendant who is not mentally competent to stand trial cannot be tried. We believe that Donald John Trump should not have been tried for impeachable offenses because of his apparent mental incapacities," the letter reads. "While the Senate chose not to have witnesses, we believe that a witness who could confirm the president's mental competence was mandatory, and therefore, in its absence, the Senate must throw out any trial results."

The letter cited Trump's false claims during the impeachment proceedings about his ties to indicted former Rudy Giuliani associate Lev Parnas and his threatening tweets as evidence of "serious doubts about competence."

Most of his tweets, the letter said, "reveal a serious level of dysfunction," while others "seem to carry the potential to incite violence."

"We believe, in our collective professional capacity, that Donald J. Trump should not and cannot be legitimately tried for impeachable offenses unless he is found to be mentally competent to stand trial under the principles of justice well established in the United States," the letter said. "Until there is an evaluation, the determination that he is competent to stand trial cannot be made nor assumed. The Senate should immediately order an involuntary assessment, since a lack of assurance of fitness precludes conviction or acquittal. A defendant — after treatment — may be mentally fit to stand trial."

Lee, who has consulted widely with state and international governments on a public health approach to violence prevention in communities and in prisons, spoke to Salon about her concerns about Trump's mental competence and her group's warning to Trump. Her views represent those of the World Mental Health Coalition but no other institution, she told Salon.

Salon: Your organization's letter says that Trump cannot be tried until he is "found to be mentally competent." Who do you think should determine this? And how would that work in the context of an impeachment trial?

Lee: This is a basic legal requirement of all courts across the U.S. Competence to stand trial on the part of defendants needs to be assured in order to preserve due process. The president himself demanded due process on a number of occasions. He should not have to demand this, since it is built in to make sure proceedings are fair. Competence is assumed until doubt is raised — at any time for any reason — and then it is usually the responsibility of the judge, or in the case of the Senate the presiding majority leader, to order it. The threshold for this is low, and in some states, the requirement of an evaluation is automatic without needing a judge's order.

When serious doubt is raised, the defendant cannot "waive" this requirement or refuse an evaluation. This is because incompetent individuals may be inclined to deny that they are incompetent. A routine, standardized exam, as is performed almost every day all around the country, must be given by an independent evaluator, most often a forensic mental health professional. It is perhaps one of the most common examinations we do, with some professionals performing them full-time, all day long. The test is very basic.

I know that the Senate trial has been very atypical, without documents or witnesses. Maybe that kind of unprecedented situation is acceptable for other reasons, but competence to stand trial should be non-negotiable. In our country, defendants have an unassailable right to understand the charges against them, to assist in their own defense and to have both a rational and factual understanding of the proceedings.

If they are incapable of understanding or of assisting — for example, if they believe they are "perfect" against all evidence and do not know what they are being charged with, or have trouble demonstrating a rational and factual understanding of what is happening — they are legally incompetent, and the trial cannot proceed. If there is a mistrial from proceeding despite incompetence, then trial results would have to be thrown out. No matter how clear the evidence of guilt or innocence — even if an individual shoots another person in front of you and confesses to it — a mentally incompetent person simply cannot be convicted or acquitted. It is the law in this country, and a law of fairness of which we should be proud.

The letter urges Congress to try Trump after he has received "treatment." What would that look like?

If a defendant is suspected to be incompetent, authorities may arrest and hold the defendant in custody, but the case cannot go forward until the defendant's competence is "restored." Restoration is different from standard psychiatric treatment — just as evaluation of competence to stand trial is different from evaluation for diagnosis and treatment. Restoration centers around education about criminal justice procedures and treatment of symptoms so as to help with the learning.

Restoration typically happens in an inpatient setting, with predetermined periods ranging from 45 to 90 days, depending on the state and the charge. Then an evaluation is repeated to see if competence has been restored. If deemed "unrestorable," the defendant may never go through trial, and at that point, dangerousness is assessed to determine if the defendant should remain in hospital or not. If deemed incompetent but restorable, the defendant repeats the 45- to 90-day treatment. Only if deemed competent can the trial proceed.

Senate Republicans clearly do not believe — at least publicly — that the president's mental competence is a concern. Few of Trump's former advisers who worked closely with him have raised serious concerns about his mental health. How would this convince them?

It is the law that they investigate questions concerning incompetence when they arise. They should not ignore these questions, or they may be breaking the law. If they complete a trial that is illegal, despite a defendant's incompetence, then the results need to be nullified. Only an examination will settle a dispute.

In addition, the president's own legal defense recently argued that impeachable offenses should be treated like statutory crimes. Competence to stand trial is indispensable in all courts — but especially in criminal courts. Proceeding while there are serious doubts about a defendant's competence could be a crime against the defendant.

The letter mentions Trump's habit of denying knowing people whom he appears to knows quite well, as was the case with Lev Parnas. It says that he is either a "pathological liar or has severe cognitive impairment." Do you believe Trump's denials may be unintentional rather than calculated statements?

That is what we cannot know without an examination. Either way, they are very concerning. If calculated, we would wish to know that there is not a pathological basis for lying, especially when the lying is excessive in amount.

The letter also noted Trump's threat against Rep. Adam Schiff, D-Calif., who served as the head impeachment manager for House Democrats. Do you think Trump may be unaware that his rhetoric has the potential to incite violence?

If a person is inciting violence, whether aware of it or not, it makes one unfit for office — any office. If one is clearly unfit for office, then we have to think about unfitness to stand trial. I believe it is a critical issue on which the Senate trial hangs. If there is disagreement about it, then we should perform the evaluation; it is a right of the defendant guaranteed by the law. We have set up a non-governmental, independent expert panel established on medical criteria alone and through peer review, to do just such evaluations, if the Senate wishes. But it does not have to be our panel — any nongovernmental, independent panel that meets professional standards would do.