"Wuhan coronavirus" and the racist art of naming a virus 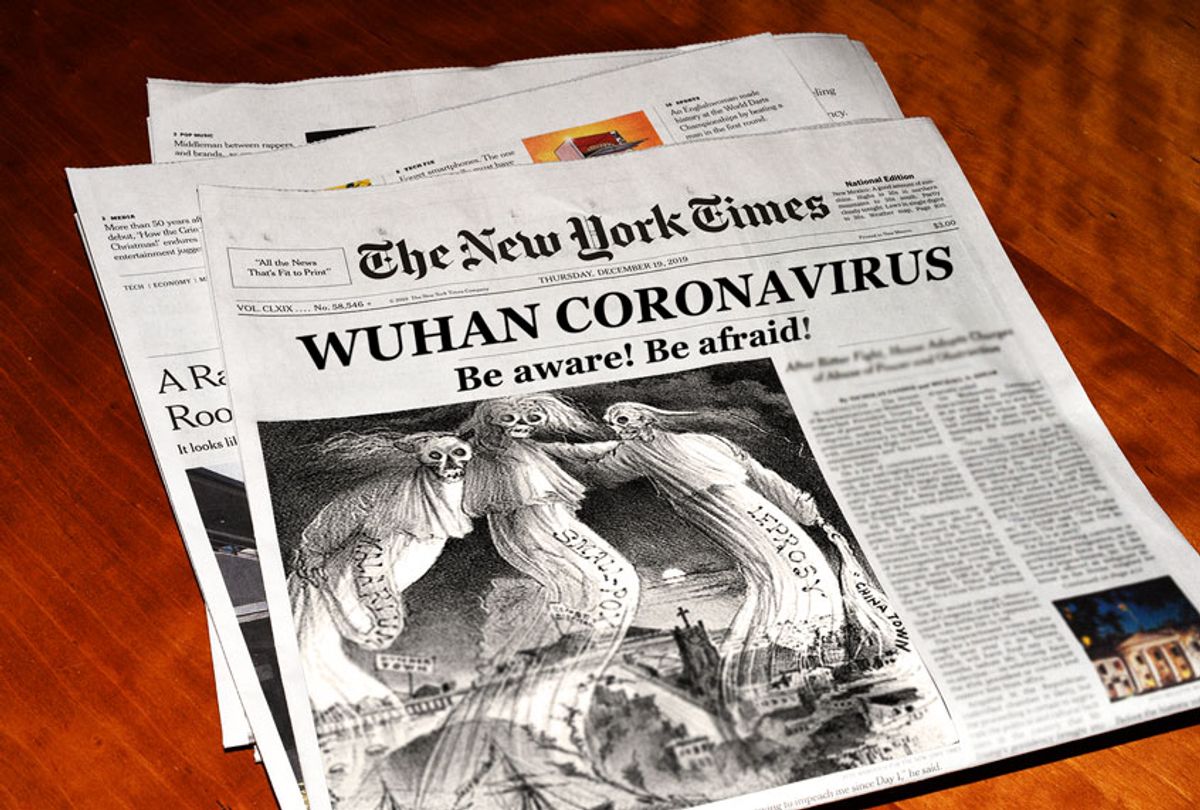 Some day, I will draw up a visual flowchart to explain how epidemics are named for the public. Specifically, there is a logic employed by both the media and the scientific community, though neither speak it aloud. It starts with the question of where the virus originates: is it currently spreading in the US, or in another Western country? If so, give it its numerical designation (e.g. H1N1), or reference the animal in which we think it started (e.g. Swine Flu, or Mad Cow Disease). But if it started in a country that Americans have stereotypes towards, naming it after that region — as with Middle Eastern Respiratory Syndrome (MERS), Asian Flu, and now, Wuhan Coronavirus — is a great way to play on xenophobic and racist tropes.

Yes, that means that white supremacy can be a factor even in the way that we name viruses — such as when the language around it, purportedly objective and scientific, stems from a white-centered, xenophobic perspective. Fears over a possible pandemic over the 2019-nCoV coronavirus (tagged by most media outlets, including the New York Times, the "Wuhan Coronavirus") has transmogrified into unchecked xenophobia and racism, with children being barred from music lessons and people running away from any person who looks East Asian. In New York City there have been several reports of assaults on Asian people, an assailant punching and kicking a woman, calling her a "diseased b*tch," and Trump-enabled racists @-ing him on Twitter, suggesting the entire country of China should be "nuked."

Trump's overheated rhetoric on migrants and people of color — and "s**thole countries," as he calls much of the world — are absolutely fanning the flames of the racist response to the Coronavirus. Yet it is important to recognize that this bias against Asians is nothing new; that the engine of white supremacist culture and language continually hums underground until something like 2019-nCoV makes it visible.

The idea that Asians are dirty, eat strange foods, and are vectors of disease has existed for as long as Asians have been in the U.S., and these ideas continue to exist today. In the 1850s, Chinese immigration was first welcomed because of our growing country's dire need for labor, and the Chinese were admired for their reputation as hard, uncomplaining workers.

In subsequent years, when the continued influx of immigration began to threaten the job prospects for white laborers, calls for immigration restrictions began alongside rumors that the Chinese were disease vectors. During an outbreak of smallpox in San Francisco in 1876, a population of 30,000 Chinese living there became medical scapegoats, Chinatown was blamed as a "laboratory of infection," and quarantined amidst renewed calls to halt immigration. The Chinese Exclusion Act, the first immigration law based on race, was enacted in 1882.

This "unsanitary" carryover is seen easily today, for instance, in New York City, a white couple recently opened Lucky Lee's, a Chinese-food restaurant that pointedly advertised itself as "clean" — and rightly caused protests.

But perhaps less apparent is our quotidian quasi-scientific language of protecting the pristine American (white) ecosystem from foreign invaders—of which Asians lead the list.

According to official language of an executive order on invasive species, signed into law in 1999 by President Clinton, the law seeks to "control and minimize the economic, ecological, and human health impacts that invasive species cause." It defines "alien species" as any species "capable of propagating that species, that is not native to that ecosystem."

Thus, both the horses that the Spaniards brought over and immigrant Chinese (and any immigrants) could both fit that definition. But horses have become part of the foundational landscape of our national mythology (as have white immigrants), while Asians, also foundational to our country's story, remain perpetual outsiders, foreigners ready to be feared and reviled with any Asian-inflected spark.

On the U.S. Department of the Interior's list of invasive species, the most common demonym on the list are those that note Asian origin (followed  closely by African demonyms, like "African giant snail" and "Africanized killer bees"):

According to the most recent U.S. Census, Asians comprise only about 5% of the population, but somehow are perceived to have invaded all corners of American life (especially overrunning college campuses). Poet and memoirist Cathy Park Hong recounted babysitting for her aunt and, at her LA apartment's pool, being removed by an angry resident who insisted they couldn't possibly be residents of the fancy majority-white apartment complex, while at the same time grumbling, "They're everywhere."

Asians are in danger of becoming feared medical scapegoats once again. The Invasive Species Advisory Committee indeed counts viruses as invasive species, citing the West Nile virus as an example of an organism "invasive and undesirable by virtually everyone."

According to the CDC, Coronaviruses, like the West Nile, are common in animals and in humans around the world — there are seven known human-afflicting coronaviruses that cause mild to lethal symptoms. Another zoonotic organism (meaning one that crossed over to humans) is Bovine Spongiform Encephalopathy, a.k.a. Mad Cow Disease, a fatal disease that slowly destroys the brain and spinal cord in cattle — a disease mostly created by humans through industrial farming practices (like feeding brain tissue and blood to cows, which are herbivorous). There have been cases of humans eating these infected cows and contracting the disease; these cases have occurred almost exclusively among people in the UK or who once lived there. And yet it's been dubbed "Mad Cow disease," not at all tagged to the United Kingdom and its people, the common vector. If scientists and the media were consistent, it would be called something like "British Prion Disease."

The origin of today's novel coronavirus, 2019 n-COV, has not been conclusively determined yet, but it is thought to be transmitted to humans via bats. With the release of this news, a picture of an East Asian woman eating "bat soup" quickly went viral, and quickly the virus of racism and xenophobia was reactivated.

The University of California Berkeley's student health center even stated that white supremacist xenophobia, i.e., "fear of interacting with those who might be from Asia," is a "common" and normal reaction to fears over 2019 n-COV.

Anti-Asian xenophobia persists as a disease of the white national psyche. It is curious, indeed, the unconscious and conscious ways we categorize invasive species as good (horses, palm trees, house sparrows) and decide which ones are bad (Asian ___); though the beautiful beach rose (also known as the seaside rose), rosa rugosa, is also an invasive from Korea, Japan, and China.

With this kind of framing of what and who is good and bad, it's no surprise the Invasive Species Act has also recently come into the purview of the Department of Homeland Security, including Customs and Border Control (CPB), who are to enforce laws prohibiting or limiting the entry of invasive species. These metaphors obviously include the ways we talk about and dehumanize nonwhite migrants.

I visited North Korea as part of an academic group in 2008; while waiting in line at the Pyongyang Airport to enter DPRK, two white students in our group were pulled out of line and taken to closed-door rooms. This caused intense panic amongst us, especially when they didn't return for fifteen minutes, then half an hour, then more as we sweated in the line waiting for entry.

The two returned no worse for wear. The reason for the delay was quite North Korean: they'd been chosen for random temperature checks, the delay caused by a pair of faulty thermometers. They had been singled out, they sputtered in disbelief, because North Koreans think of white westerners as a swine flu threat.

When the situation is reversed, it is easy to see how ridiculous racism and xenophobia is.