Primary day in New Hampshire: But whatever happens, this isn't the end

Takeaways from New Hampshire: Bernie stays strong, Buttigieg rises — and in a just world, Warren would be winning 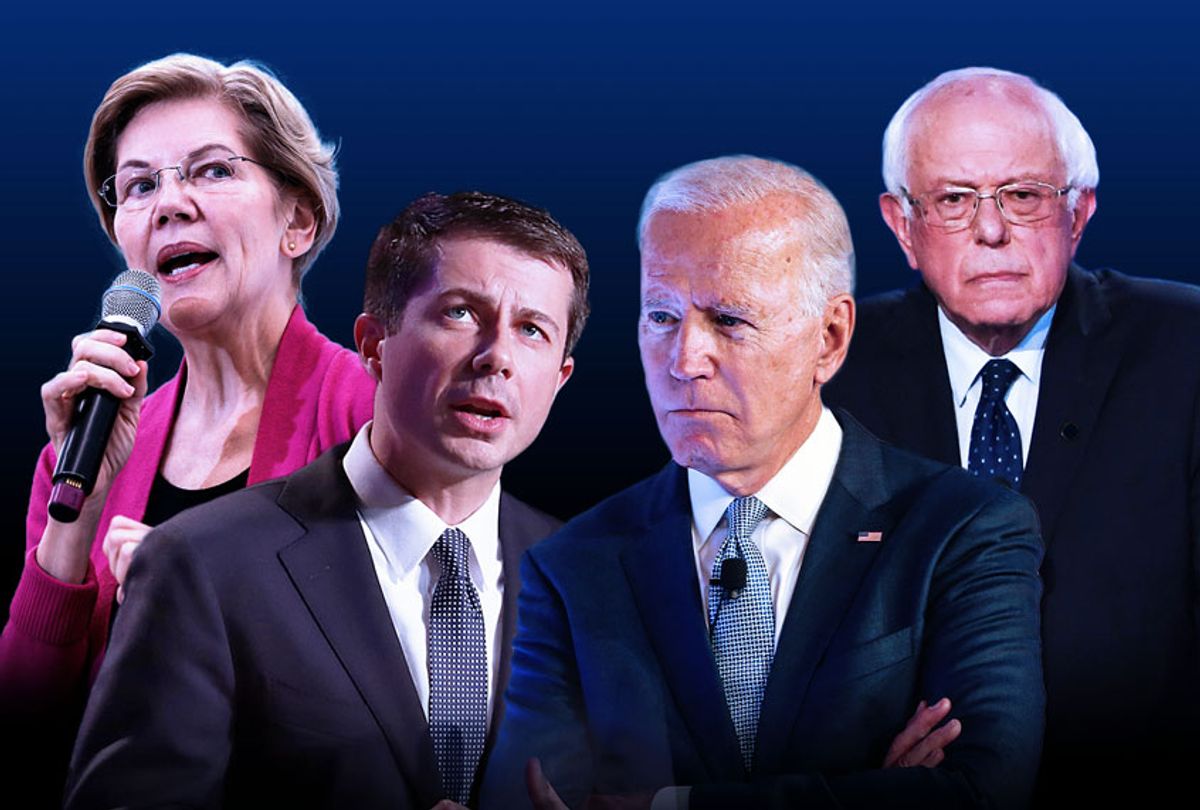 After spending nearly six days on the ground in New Hampshire, tootling around from one campaign event to another through the snowy landscapes that so inspired Robert Frost, I can come away with only one prediction: This ain't over, kids. The leading contenders for the Democratic nomination — Sen. Bernie Sanders of Vermont, Sen. Elizabeth Warren of Massachusetts, former South Bend, Indiana mayor Pete Buttigieg, and hell, let's throw in former Vice President Joe Biden — continue to show robust support and are likely to split up the primary vote Tuesday just as they did the Iowa caucuses earlier this month.

And that is how it should be. Letting a couple of lily-white rural states determine who nominee of a party that is increasingly urban and racially diverse is a bad idea, and should be fixed. In the meantime, here's hoping that once the primary season opens up to other states more representative of the Democratic coalition, this does end quickly, as protracted primary campaigns can be bad for morale.

As promised, being in New Hampshire means getting to listen to all the candidates talk, including those are mostly entertaining sideshows, like Tom Steyer or Andrew Yang. Though it was honestly pretty hard work to find Biden, who barely showed up compared to the other politicians hustling out there. After nearly a week on the ground in the Granite State, here's what I saw that will have some import going forward:

Sanders has a strong base, and it's serving him well in a split field. Sanders built up a base of fervent supporters in 2016, resulting in packed rallies and loud cheering at cattle call events like the McIntyre-Shaheen dinner in downtown Manchester. He's leading the pack in New Hampshire polls at 27%, and will quite likely build on that lead on Super Tuesday. His supporters are loyal and working hard for him, and they keep on donating money.

But there are good reasons to believe he's struggling to build on that base. It's tough to tell in New Hampshire, where Sanders has been a known entity for decades — coming from right next door in Vermont — which may explain the "eh, Bernie" response you get from people who aren't his base voters. But he's had a long four years to make his case, and it's getting harder to feel that the revolution is starting any minute now. Still, in a split field, he may be able to pull out a win, since no one else seems to be consolidating the rest of the voters.

There's no need to panic about beating Trump if that happens, however. Sanders is a great speaker. People respond positively to him, even if they're not huge fans. He's funny and sharp and rarely misses a beat. So I do think he'll be a strong general election candidate, especially if some of his more aggressive supporters can learn to tone it down.

If Warren was a man, this would be over already. Warren is a rock star. Crowds love her and she tends to get bigger cheers than anyone, even Sanders. She always takes her analysis to the next level, but manages to explain complex topics without dissembling. The ideas that sound radical in Bernie's mouth (probably by design, to be fair) sound like common sense coming from Warren. She's probably the single most popular candidate in the field, with people talking about her positively, even if they support someone else.

It's clear, however, after months of cable news seeding the idea that the public is too sexist to elect a woman, that voters aren't backing her. This created a weird dynamic in New Hampshire, where Warren drew big crowds, often due in large part to political tourists from other states who came to see the hottest act in town, not because she was actually rallying local voters here. So because of sexism, the most popular politician in the field will probably falter in the actual primary.

The Mayor Pete bump is real. Extremely online political nerds aren't going to like it, but, as I wrote on Monday, a lot of voters look at Buttigieg and see Bill Clinton in 1992 or Barack Obama in 2008. And they think that's what it takes to beat Donald Trump in November. He's turning out robust crowds of real supporters, not just curiosity-seekers.

That said, New Hampshire really isn't representative of Democratic voters on the whole, so even if he does well here, there's a not-small chance his campaign falls apart soon.

Biden isn't doing so great. While most of the candidates were in New Hampshire hustling as soon as the Iowa caucuses were over, Biden went home for a few days. He looked rested when he actually showed up, but the rally I went to in Concord felt more like the meeting of a cancer support group than a political rally. It was the only event I attended during this visit where finding parking was a breeze. Biden was doing his avuncular act, complimenting and teasing people in the audience, but his energy felt spiky, not cheerful.

Later that day, according to the Washington Post, he called a young woman "a lying dog-faced pony soldier." This was played off as a joke, but also, he does seem genuinely annoyed. He might still be able to coast through on name recognition in the upcoming primaries, but anyone who sees him in action is likely to believe he's toast.

Amy Klobuchar just isn't clicking. The Minnesota senator has surged a bit in New Hampshire polls, which makes sense, since in person, she comes across as soothingly competent. (She also has an acidic sense of humor when she gets away from the canned jokes, which I appreciate.) But it's also easy to see why Klobuchar isn't clicking with people on a larger scale. She's very smart, but she ends up meandering when she talks, getting into the weeds on how policy and politics work in ways that are hard to follow, even if you know what she's talking about. Contrast this with Warren, who makes even the hardest topics easy to understand.  (Warren spent most of her life as an educator, so this makes sense.)

Klobuchar is also frustrated, clearly annoyed with politicians she sees as making promises they can't keep. Unfortunately for her, people tend to vote their hopes and hearts rather than their frustrations, especially among Democrats.

Team Trump is highly motivated, not by love for their orange master, but by their burning hatred of Democrats. At the McIntyre-Shaheen dinner, a group of pro-Trump folks showed up to protest. They weren't traditional protesters who often have a set of demands they're trying to highlight, however. What they seemed to be protesting was the existence of the people at the event, i.e., ordinary Democratic voters who wanted to see their candidates speak.

They stood near the entrance to flank the people who showed up and taunt them to their faces with trolling slogans like "Four more years!" None of it was positive in the slightest. It was unbridled hate, built up after years of right-wing propaganda demonizing liberals.

Frankly, it was terrifying. Hate like that is a terrible thing, but it has a way of focusing and organizing people. If Trump supporters are willing to brave the ice and snow to show up at a relatively obscure Democratic event just to tell strangers they hate them, they will definitely have the energy to organize and vote.

That should be a sobering reminder that whoever wins the nomination in the weeks ahead, what matters most is making sure that kind of eliminationist hate is defeated at the polls.