The secret to the special sauce in HBO's addictive "McMillions" 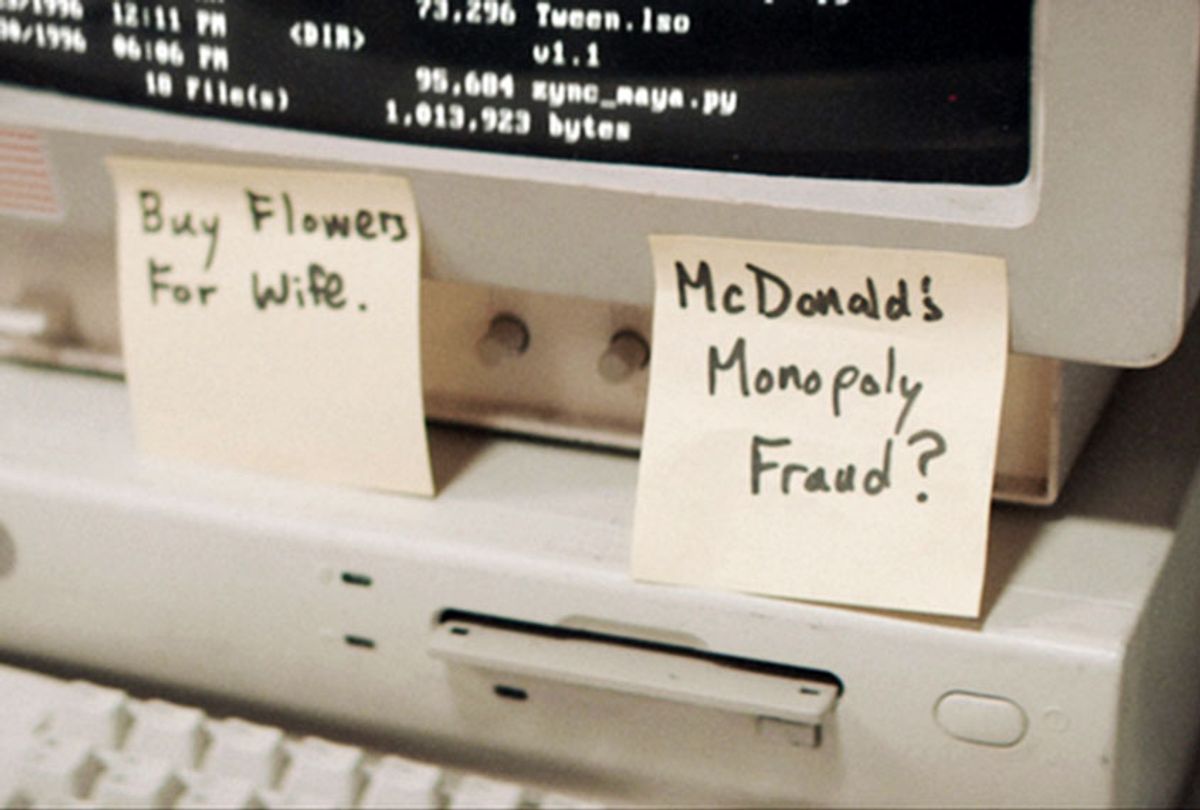 If you haven't tried HBO's Mark Wahlberg-produced true crime documentary "McMillions," then Monday's episode is prime time to catch up. Not only is it Presidents' Day – the day when we honor the capitalism and freedom fries that our forefathers died for – but it also marks the halfway point in the six-episode series. It is essentially the juiciest, most satisfying portion between the two all-beef patties of the Big Mac that is "McMillions."

But for the uninitiated, it all begins with a young Jacksonville-based FBI agent who is on the hunt for a case that will move the "funmeter," something beyond his bureau's typical probes into healthcare and medical fruad. That's when Doug Mathews sees a forgotten Post-it note, stuck to a senior agent's desktop — "McDonald's Monopoly Fraud?" scrawled on it with marker —and runs with it.

This leads to a multiyear investigation that uncovered millions of dollars of theft from the McDonald's Monopoly game that was supposed to be a fun sales promotion awarding prizes ranging from free food to cars and cash (and also explains why most people who played the game never won anything more valuable than a large soda). Like some of the best true crime series in recent years, "McMillions" goes beyond headlines that, for many, were simply a blip on the radar, revealing an almost unbelievable story of deceit and collusion, propelled by both ordinary people and organized crime.

In the first three episodes, Mathews is quickly established as our main character. After he calls the number associated with the tip on that Post-it, he finds out that three of the recent $1 million winners of the McDonald's Monopoly promotions are related.

Questions immediately emerge: Is McDonald's in on this scam, or are they the ones being defrauded? Who actually has ready access to the $1 million game pieces? And most compellingly — who in the world is "Uncle Jerry," a name that comes up in Mathews' research into the winning contestants?

"McMillions" isn't a particularly visually rich show; it's mainly a compilation of current-day interviews, stuffy re-enactments, and a rotation of archival McDonald's commercials that become blandly familiar after the second episode. With the exception of actual footage from an undercover investigation, you could close your eyes, pretend this is a podcast, and it would be just as satisfying an experience. But what it lacks in aesthetics, "McMillions" makes up for in personality.

Namely, Mathews' personality. Creators James Lee Hernandez and Brian Lazarte literally hit the jackpot with the FBI agent. He speaks about his job with the enthusiasm of a sportscaster breathlessly relaying a winning play. When Mathews describes going undercover, you're enthralled; and when he describes a meeting so long that he "might have been hungry twice," you're hungry — just like him — to get back to the investigation. Mathews is the show's special sauce – tangy and undefinable, yet accessible and addictive.

The supporting cast is strong, too. We've got a mob wife, a straight-laced senior agent, a little dog with a big, snarly personality, and (minor spoiler) two Jerries. Hernandez and Lazarte also give voice to people — just normal, ordinary people — who somehow managed to get swept up in the high-octane scam.

What's a million dollars to a $100 billion company? They won't miss it, "winner" Gloria Jean Brown explains, but to her, it's a life-changing "blessing." In Episode 3 airing Monday night (Feb. 17), it's fascinating to see the undercover sting operation in action, shooting fake commercials of the so-called winners. Gloria performs take after take, and the series creates tension from the uncertainty of whether or not she'll catch on . . . or what happens if she does. That she becomes a sympathetic figure is also testament to how complex the entire undertaking was, even as it dealt with people who were supposed to be criminals.

While the first episode of "McMillions" is masterful in establishing our central cast of characters — all set to the kind of music you would expect from a '70s buddy-cop comedy — the tone shifts slightly in the subsequent two episodes to grapple with how enticing it can be for people looking for a come up to turn towards criminality, especially when the victim feels amorphous and far away, and the chances of getting caught seem pretty slim.

Sometimes, as a viewer, you can feel like that, too. Unlike other true crime stories, like "Making a Murderer" or "Confession Killer," this isn't a series rooted in bloody victimhood or a miscarriage of justice. Lives aren't on the line, here. In tone, it feels more like a reverse heist. But like a Big Mac, "McMillions" just satisfies a certain craving — for something that's a guaranteed good time.