Trump's pardons are for the "same offenses" Trump and his advisers are accused of, said MSNBC's Ari Melber 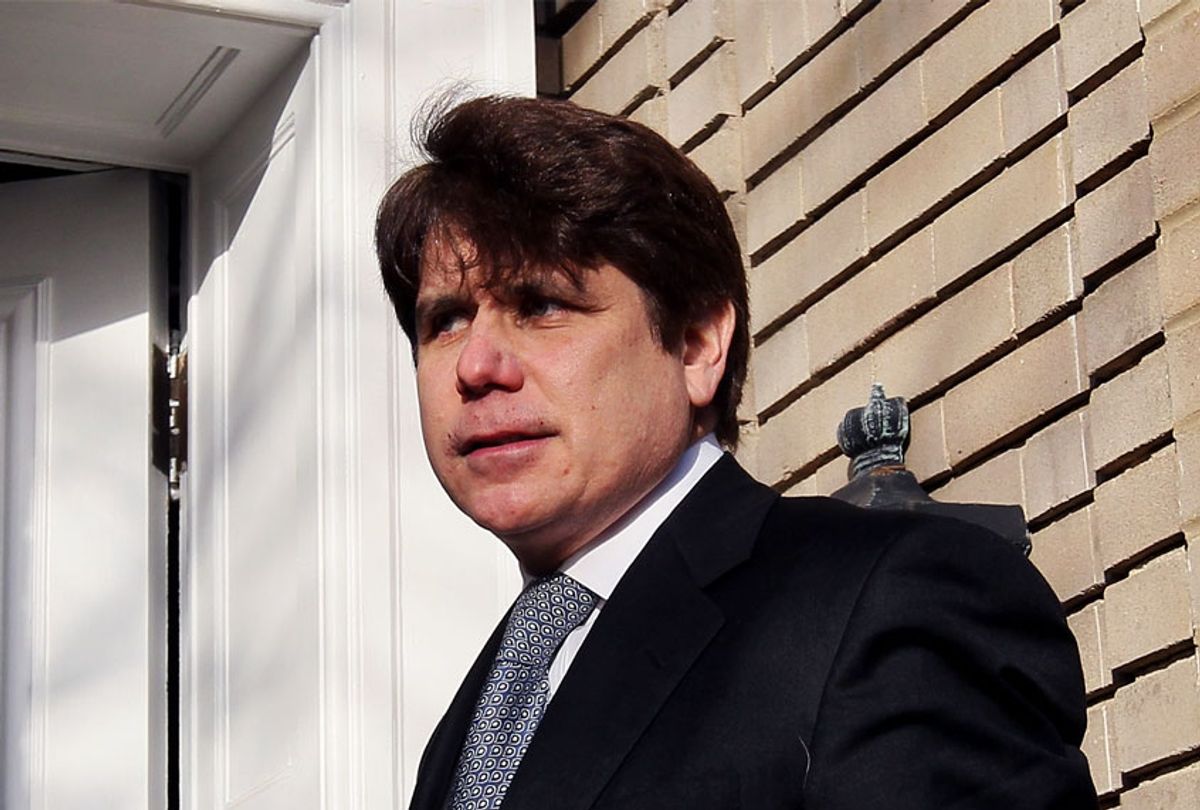 Blagojevich was convicted of corruption just months after appearing on Trump's NBC show "The Apprentice." Blagojevich was sentenced to 14 years in prison after he effectively tried to sell the Illinois Senate seat vacated by former President Barack Obama when he was elected in 2008. He was charged with more than a dozen other crimes.

Blagojevich was not scheduled to be released until 2024, but his wife, Patti, went on a media blitz to lobby Trump to pardon her husband, comparing the special prosecutor investigation into Blagojevich's corruption to the Bob Mueller investigation, which Trump decried as a "witch hunt," The Associated Press reported.

Trump on Tuesday called Blagojevich's sentence "ridiculous." Notably, a judge overseeing the case previously said, "the evidence, much of it from Blagojevich's own mouth, is overwhelming."

Trump pardoned Blagojevich despite Republican efforts to deter him.

"Commuting the sentence of Rod Blagojevich, who has a clear and documented record of egregious corruption, sets a dangerous precedent and goes against the trust voters place in elected officials," five Republican House members from Illinois said in a letter to the president last year.

Trump also announced that he would pardon Kerik one day after he appeared on Tucker Carlson's Fox News show to argue that Trump was the victim of an "attempted coup."

Kerik, a close ally of Trump's personal attorney Rudy Giuliani, pleaded guilty to eight charges including tax fraud and lying to White House officials in 2009. Kerik served three years in prison in a case where he faced three decades behind bars.

Kerik, who worked as Giuliani's personal bodyguard and driver during his first mayoral campaign, was appointed by President George W. Bush to head the Department of Homeland Security in 2004 before withdrawing after allegations of tax fraud surfaced. Kerik admitted to lying while being vetted for the top DHS job.

More recently, Kerik worked on the case of former Navy SEAL chief Eddie Gallagher, who was pardoned by Trump after being charged with war crimes.

Trump also granted clemency to Milken, who was described by CNBC as "the former junk bond king who became a face of the insider trading financial scandals of the 1980s." The move came days after a longtime associate of Milken held a $10 million fundraiser for Trump over the weekend. Milken is also a longtime friend of Treasury Secretary Steven Mnuchin, who was among those lobbying for clemency, along with Giuliani and Trump's son-in-law Jared Kushner, according to The New York Times.

Milken was sentenced to 10 years in prison and fined $600 million after pleading guilty to fraud and racketeering charges in 1990. His sentence was later reduced to two years after he cooperated with investigators.

A White House statement on Tuesday praised Milken as "one of America's greatest financiers" and touted his "use of high-yield bonds in corporate finance."

Trump's pardons also included Safavian, a former George W. Bush political appointee who was convicted in the Jack Abramoff lobbying and corruption scandal; and DeBartolo, who was fined $1 million after he paid a $400,000 bribe to Louisiana's governor for a casino license.

A White House press release also noted that Trump gave a full pardon to Ariel Friedler, a tech entrepreneur who pleaded guilty to hacking his competitors' computers in 2014; Paul Pogue, who pleaded guilty to tax fraud in 2010; and Angela Stanton, a best-selling author and prison reform activist who was convicted in 2007 for her role in a stolen vehicle ring.

The president also commuted the sentences of Tynice Nichole Hall, Crystal Munoz, and Judith Negron, who were convicted of drug-related offenses before helping other inmates rehabilitate themselves.

Many legal analysts criticized Trump's more prominent pardons, arguing that he was pardoning people convicted of crimes that the president himself may have committed.

"Trump and Blagojevich have both faced allegations they abused their power to extort bribes, and Trump downplaying Blagojevich's convicted felonies smacked of self-interest," wrote MSNBC's Ari Melber. "Trump's new pardons are for well-connected insiders convicted of the same offenses Trump and several of his advisers are accused of — serious crimes of extortion, bribery, misleading authorities or abuse of office," he added.

"8 of these 11 uses of the pardon power went to people who are rich, famous, powerful, or highly successful," wrote attorney Ken White. "I know that will shock you, but that does not reflect the composition of people who have been convicted."

Daily Beast Editor-in-Chief Noah Shachtman mocked Trump's insistence that he's focused on rooting out corruption in light of the pardons.

"Nothing says 'corruption fighter' quite like pardoning a slew of politicians and public officials convicted of corruption," he wrote.

"Really hard to think of a collection of individuals less deserving of presidential intervention than Joe Arpaio, Scooter Libby, Dinesh D'Souza, Conrad Black, Bernie Kerik, Rod Blagojevich, and Michael Milken, plus a handful of right wing arsonists and war criminals," he wrote. "Bernie Madoff must be wondering what he has done wrong to be left out."

"The bigger issue here," wrote The Atlantic's Adam Serwer, "is that Trump uses pardons to destigmatize the types of crimes he and his allies are accused of, while pursing the harshest possible punishments against poor, black and brown people, and rewarding others who commit crimes against the same groups."