Don't get suckered, Democrats: Of any current candidate, Bloomberg would be the easiest for Trump to beat 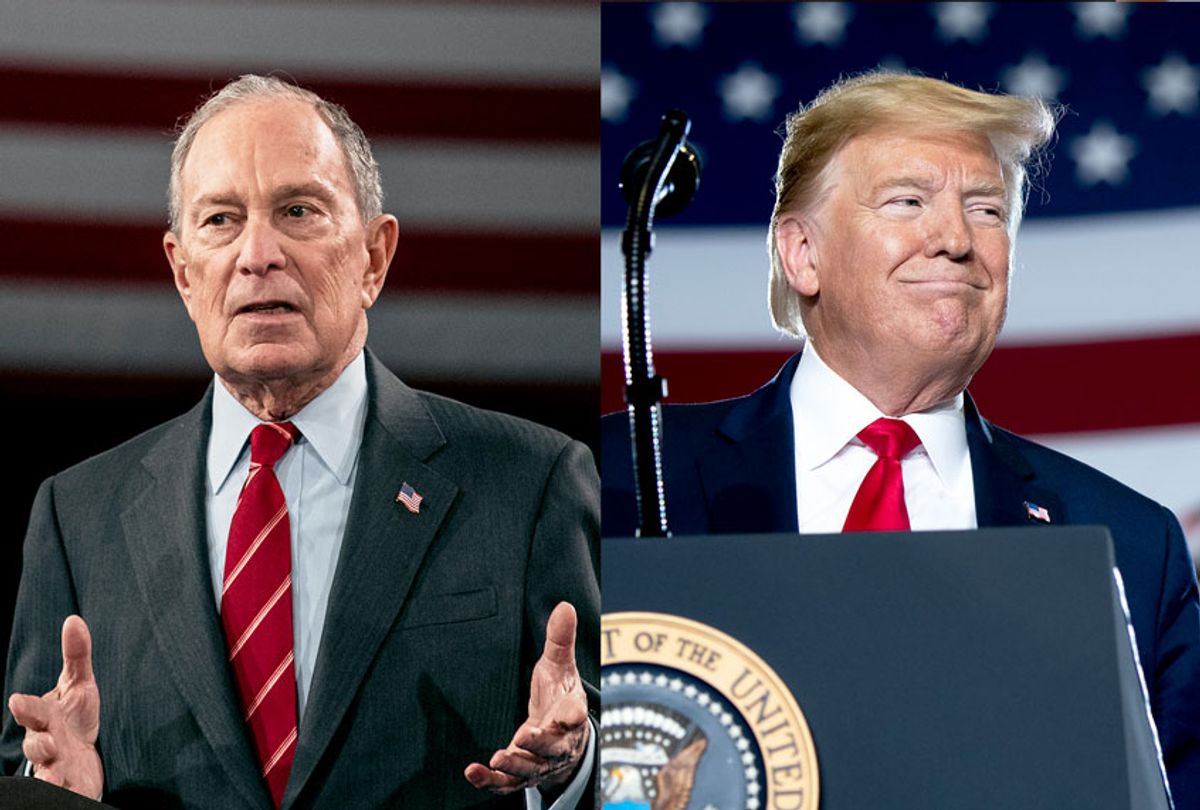 Information mogul and former New York City mayor Mike Bloomberg — whose net worth is an estimated $62 billion — has, by absolutely blanketing the airwaves with ads, managed to buy himself a respectable polling position in the Democratic presidential primary race. In the national Morning Consult polling, Bloomberg has moved to third position behind Sen. Bernie Sanders of Vermont and former Vice President Joe Biden. His massive fortune allows him to purchase a dizzying number of endorsements. As Biden's campaign continues its slow implosion — he placed fourth in the Iowa caucuses and fifth in the New Hampshire primary — the centrists of the punditry are turning their lonely eyes to Bloomberg, hoping his buy-the-election strategy can stop Sanders.

But nominating Bloomberg would be a uniquely stupid idea for Democrats, and because of that singular, unquantifiable factor that has obsessed both voters and the media: Bloomberg is not electable.

The moral argument against Bloomberg is starting to emerge in the media, in reaction to his sudden and well-funded rise. As mayor of New York for 12 contentious years, Bloomberg backed the wildly racist stop-and-frisk policy that empowered cops to target men of color for random searches, which Charles Blow of the New York Times said "amounted to a police occupation of minority neighborhoods" and did little to actually stop crime.

Bloomberg, imbued with the shamelessness of a man too rich to ever hear the word "no," openly bragged about the racism motivating the policy, telling a crowd in Aspen in 2015 that 95% of murderers are "male, minorities, 16 to 25" and that this supposed fact was enough to justify treating an entire demographic as suspicious and a policy that amounted to "throw them up against the walls and frisk them." (As Blow notes, 90% of people stopped in this way were innocent, cutting directly against Bloomberg's assignation of collective guilt to young men of color.)

In similar comments in 2011, Bloomberg said that this "enormous cohort of black and Latino males, age, let's say, 16 to 25" doesn't "know how to behave in the workplace where they have to work collaboratively and collectively."

Michael Kranish of the Washington Post also published a lengthy article detailing Bloomberg's verbal diarrhea when it came to expressing his uglier views on women. He allegedly told female employees that they were ugly and that they should reward a male colleague for getting married by lining "up to give him [oral sex]".

In a legal complaint against Bloomberg, one employee said that Bloomberg, upon hearing that a female employee was having trouble finding child care, yelled, "It's a f**king baby! All it does is eat and s**t! It doesn't know the difference between you and anyone else! All you need is some black who doesn't even have to speak English to rescue it from a burning building!"

Pointing these things out, however, causes many (mostly white) liberals to emit some variation of the argument that they only care about beating Trump and if Bloomberg can do it, then they'll be delighted to vote for him

This is a dumb argument, however, because Bloomberg cannot beat Trump. Indeed, the folks in Trump world are absolutely licking their lips in excitement at the idea of running against Bloomberg. Trump spokeswoman Kellyanne Conway, for instance, was practically drooling with pleasure when she went on Fox News to claim that Bloomberg's comments about women were "far worse" than Trump's bragging about sexually assault in the infamous "Access Hollywood" tape.

It is no doubt tempting to many to jump in and try to argue back, ranking "grab them by the pussy" versus Bloomberg's alleged sexual harassment. That, of course, is exactly what Conway wants, because she understands how many people will react when they hear Democrats try to defend Bloomberg's behavior: They will conclude that liberals are hypocrites who don't really care about Trump's misogyny, but only opportunistically feign outrage to score political points. And those voters will therefore decide not to vote for anyone in the race, and spend Election Day doing anything else.

As I've argued many times before, Trump's base of support is baked in. He can't build on it, because most Americans think he's a pig. But it's also not likely to shrink, since the fact that he's a pig is what his voters like about him. So Trump's not going to waste a whole lot of time and effort trying to persuade anyone to vote for him in 2020. Instead, the key is to convince voters who don't like him not to vote at all.

The strategy for doing this will be to attack the Democratic nominee from the left, by accusing that person of being racist, sexist, corrupt or, most likely, some combination of the three. That's why conservative media tried to get people to believe (falsely) that Sanders was a fan of the segregationist George Wallace. It's why Trump and his lackeys keep falsely accusing Biden of corrupt behavior in Ukraine. It's why Trump keeps falsely accusing Sen. Elizabeth Warren of Massachusetts of trying to pass herself off as Native American for professional gain.

Yes, it's really rich of Trump to accuse anyone else of being racist or corrupt or sexist, since he's a gold medalist in all three events. But that ultimately doesn't matter. His own voters already know that about him. Not only doesn't it discourage them, but in many cases, his immorality is exactly what they love about him. Rather, the point of these accusations is to convince some number of potential Democratic voters that Trump's opponent is just as bad as he is and there's no point in  participating at all.

With Bloomberg, this strategy will be laughably easy to pull off. Unlike the false accusations that are being lobbed at the other Democratic candidates, the claims that Bloomberg is a racist and a sexist are all too true. Even if it's intellectually irrational, it's emotionally understandable that many progressives will be so uncomfortable voting for Bloomberg that they won't do it, even if refusing to do so means Trump will be re-elected.

That's why Conway was all but wiping drool off her chin with the excitement at the idea of Bloomberg as the Democratic nominee. His personal fortune may be many times larger even than the eye-popping billion-dollar war chest that Trump has for his campaign, but there's a hard limit on the power of advertising in a national election where news coverage far outweighs the impact of marketing. The true nature of the accusations against Bloomberg will mean they will spread rapidly through reputable media — indeed, they already have — whereas honest fact-checking can, in some circumstances (if not enough) dampen the effect of false accusations against the other candidates.

This is one of those situations where there's no need to engage in a false dichotomy pitting what's right against what's effective. There's no need for progressives to compromise their values by running someone as gross as Mike Bloomberg, and doing so would actually be counterproductive. Any candidate that runs against Trump will be subject to bad-faith accusations of racism and sexism, meant to demobilize the Democratic vote. But there's no need to make that easier by running someone who actually is both racist and sexist.