Amid the rising tide of "gaffes," Joe Biden looks less electable every day

Joe Biden is the least electable of the major Democratic candidates. Will voters see that in time to stop Trump? 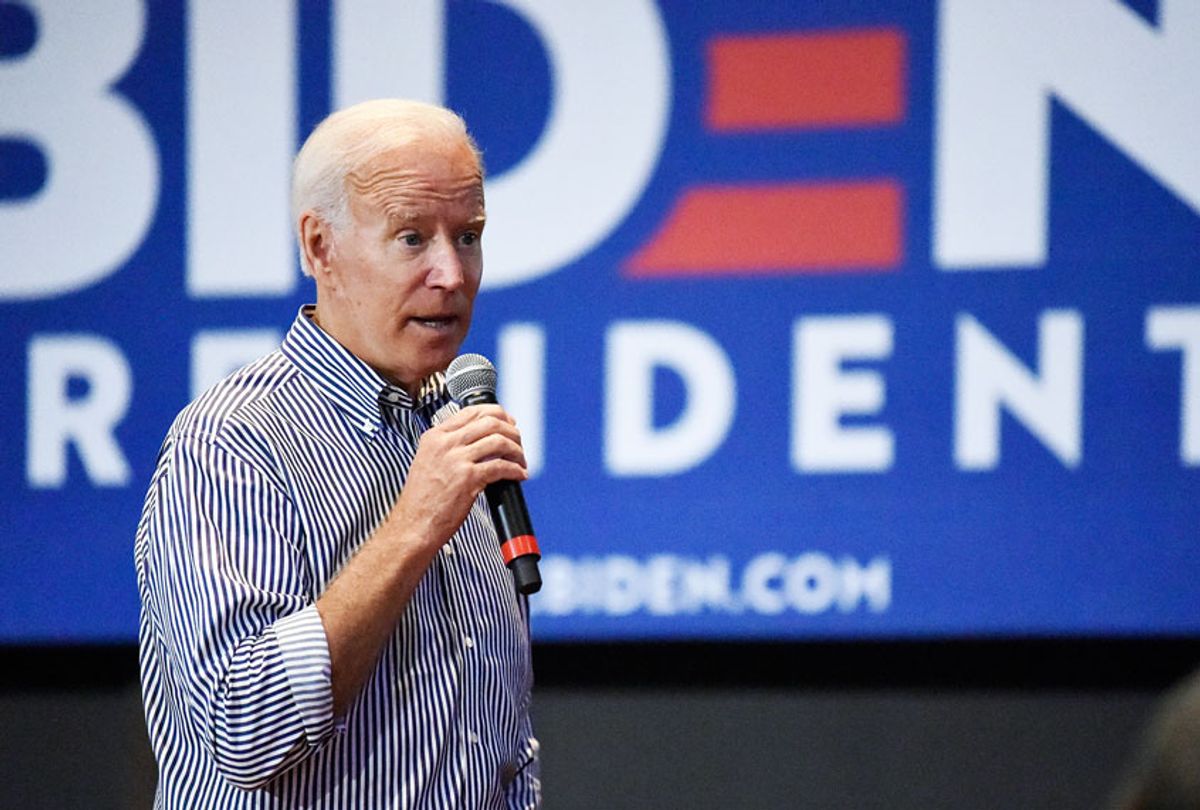 From the beginning of his 2020 campaign, Biden has banked his nomination chances not on arguing that he's the best candidate, either in terms of policy or enthusiasm, but that he is the only one "safe" enough to run against Donald Trump in the general election. Coasting on his association with the wildly popular Barack Obama, Biden's strategy has been to appeal to skittish Democratic voters who might not themselves have much personal zeal for the former veep, but who believe he won't scare off those fragile working-class white voters in the Midwest who have become such a focus of media attention since Trump's election.

"Maybe you have to swallow a little bit and say, 'OK, I personally like so and so better,' but your bottom line has to be that we have to beat Trump," Jill Biden told a group of New Hampshire teachers last month, capturing the "settle for me" strategy that apparently fuels her husband's campaign.

So far, the swallow-the-bitter-pill angle has been working well for Biden. His campaign presence has been limp and he has drawn middling crowds at best, but he's been holding a fairly steady lead in the polls at around 30 to 32%, buoyed by voters who buy the argument that an uninspiring candidate is also a safe candidate. But the main premise of Biden's campaign — that he's the most electable of them all — is starting to show cracks.

First of all, Biden's unfortunate tendency to say dumb or untrue things, which helped end his presidential ambitions in 1988 and 2008, is proving yet again to be a little more troublesome than the word "gaffe" implies. On the contrary, it's starting to seem more like an indifference to the truth that borders on mendacity, or an ego too big to admit that it's naughty to tell lies. Or, as some have suggested, it could also be evidence that Biden, who will be 78 years old on Inauguration Day in 2021, is slipping mentally.

In an interview released Tuesday on NPR, Biden made flatly false statements about his record regarding the Iraq War.

Biden voted in 2002 to authorize then-President George W. Bush to go to war with Iraq. He now claims he only did so because Bush assured him he wouldn't actually start the war and that "he needed the vote to be able to get inspectors into Iraq."

Biden went on to say that after Bush began a bombing campaign against Iraq, "I came out against the war at that moment."

That's not true. Months after the invasion started, Biden told a crowd at the Brookings Institution, "I voted with my colleagues to give the president of the United States of America the authority to use force, and I would vote that way again today." He didn't publicly come out against the war until 2005, well after the emergence of an anti-American insurgency that made it clear the conflict could continue indefinitely.

The worst part is that Biden made these remarks to NPR as part of a clean-up effort for another flatly false thing he said last week at a campaign stop in New Hampshire. Claiming it was "the God’s truth" and "my word as a Biden," Biden told a dramatic story about flying to Afghanistan to pin a Silver Star on a Navy captain who had rescued the body of a fallen comrade.

The problem is, that didn't happen. There was an Army specialist who did something similar, and received the Medal of Honor at the White House. But, as the Washington Post notes, "almost every detail in the story appears to be incorrect." It seems Biden grabbed a few separate experiences in his life and melded them together into one big story that was a lot more dramatic — and also made Biden himself look more heroic than he had been.

Rather than apologize for misspeaking, Biden was defiant about his earlier remarks in the NPR interview, saying that the "details are irrelevant" and what matters is  his "judgment."

Indeed, that is the issue: Biden's lack of respect  for the truth does not speak well of his judgment. He is, after all, trying to become the nominee who will take on Trump, the consummate liar, in a hotly contested presidential campaign. By telling his own fish tales and lies, Biden is handing Trump a gift-wrapped package: A "both sides do it" narrative that the mainstream media, always eager to appear "balanced", will eagerly embrace, thereby undercutting many of the moral arguments against Trump.

Trump's incessant lying — he's up to an average of 13 a day — is a real problem for him going into 2020, particularly with the white working-class women who helped push him over the top in 2016 but are starting to get sick of his endless depravity. But those voters could be persuaded to back Trump, however reluctantly, if they get it into their heads that the Democrat is just as bad. And Biden's constant truth-fudging will create that opportunity for Trump. This worked wonders on Hillary Clinton, who was subjected to oversized media coverage of a relatively minor email scandal, which convinced voters that both candidates were hopelessly corrupt and so they might as well let Trump win.

It's also possible, of course, that Biden means well and that, as Richard Cohen of the Washington Post argued on Monday, "his gaffes continue feeding the impression that he is a touch gaga."

This image of Biden as a daft grandpa is starting to embed, as The Onion — the same parody newspaper that  helped create Biden's fun "Uncle Joe" persona — ran a devastating satire Tuesday headlined, "‘Help! Help! Who Am I? Where Am I? Who Are You People?’ Says Biden In Embarrassing Campaign Gaffe."

"Democrats still like Biden a lot, and a large part of what they’re responding to is the unscripted, off-the-cuff charm that they’re not getting from politicians who necessarily know who they’re talking to or what year it is," an imaginary Democratic analyst is quoted saying.

Needless to say, fears that Biden is old and slipping his gears cuts against his "electability" argument. Donald Trump has already seized on this, calling Biden "Sleepy Joe." Yes, it's entirely possible arguable that Trump — whose lies are peppered with sentence fragments, lost trains of thought and mispronounced words — is also not entirely there. (He's only three years younger than Biden.) But once again, that just sets up a "both sides do it, so who really cares?" narrative that could propel Trump into a second term.

On Wednesday, we saw a sign that Biden's primary firewall built on "electability" is starting to crumble, as his campaign staff began working to lower expectations of a Biden win in the Iowa caucuses that will kick off the primary season next February.

"Do I think we have to win Iowa? No," Politico reported a senior campaign official telling reporters, while emphasizing that they think Biden has "home field advantage" in the New Hampshire primary a week later. That's a nonsensical statement, considering that Biden is from Delaware and his campaign headquarters are in Pennsylvania, hundreds of miles away. If anyone has a home-field edge in New Hampshire it would be Bernie Sanders and Elizabeth Warren, who are both senators from neighboring states.

This approach is likely a response to polling that suggests Biden's healthy lead in national polls is significantly narrower in Iowa. Biden's struggles in the Hawkeye State, where voters tend to start focusing on the candidates earlier because of its national importance, reflect an uncomfortable possibility for his campaign: The more voters actually pay attention to the race, the more interested they are in voting for someone else.

More evidence for that theory is polling data showing that among voters who are paying the most attention to the primary race, Warren is leading by a healthy margin.

Biden's team is dismissive of these numbers, with one advisor telling Politico, "The Democratic Party is not Twitter," clearly implying that while Biden does poorly with political junkies, he can coast to victory on the backs of voters who don't follow every twist and turn in the race.

The problem with relying on voter ignorance to get Biden over the finish line, however, is that voters who are tuned out now will likely start to pay more attention as we get closer to voting season. More importantly, it's irresponsible of Biden's campaign to bet on voters nominating him out of ignorance, only to discover during the general election that Biden wasn't nearly as "electable" as they'd been led to believe.

Electability is the quality that matters most to Democratic primary voters, and that's understandable. More than anything else, they want to get Trump out of office next year. But the reality is that Biden, who is betting everything on the premise of his electability, has the most potential pitfalls of any of the competitive candidates in the primary race. Tuned-in voters are starting to see that, and are drifting away from him. The only question is whether enough voters will see the light before it's too late, and Biden has drifted into the nomination — and a possible electoral disaster.