Big Tech has been adept at making workers believe management has their best interest at heart. No more 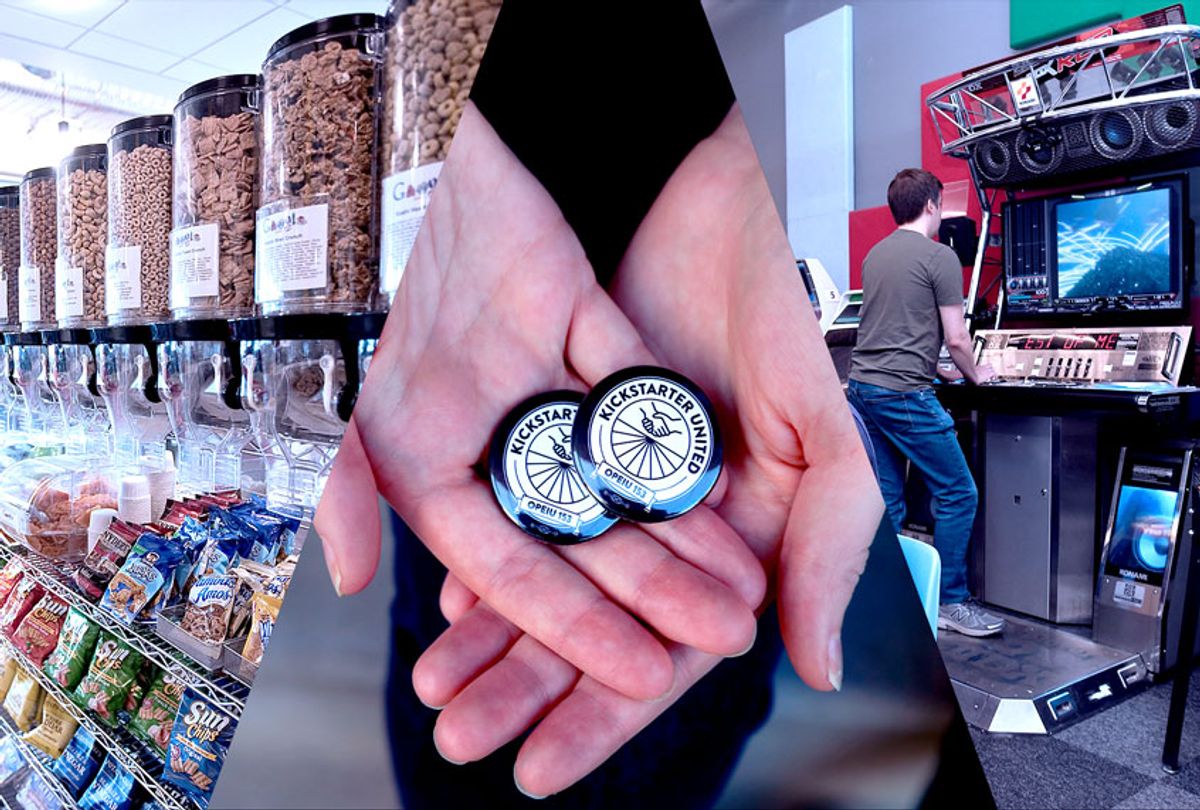 A cart full of snacks sits near a mini-kitchen in a Google Kirkland building in Kirkland, Washington. More than 350 employees work in the Kirkland facility, which includes amenities such as a climbing wall, gym and soda fountain, and consolidates several offices throughout Kirkland. / Clarissa Redwine, 29, shows union buttons while posing for a portrait in Brooklyn, NY. Redwine and her former colleague, Taylor Moore, said they were fired from Kickstarter after starting to organize an effort to unionize, which would have been a first for a tech company of that stature. / Facebook employees play video games inside an arcade at the company's corporate headquarters campus in Menlo Park, California. (Yana Paskova/Stephen Brashear/Josh Edelson/AFP/Getty Images)
--

Employees at Kickstarter, a crowdfunding platform, voted to join a labor union Tuesday. The move comes nearly 11 months after the employees publicly announced their plans to unionize in March 2019. In a 46 to 37 vote, employees approved the vote to join a chapter of the Office and Professional Employees International Union (OPEIU), marking a historic first for white collar tech workers.

The move signals a shift in labor organizing among white-collar tech workers — a group that includes programmers, who have been historically resistant to finding solidarity among their fellow workers, and more often seem to sympathize with management. That culture of work could perhaps be changing.

The union, Kickstarter United, will now be formally recognized by company management.

"It's been a long journey, but now the real work is ahead of us," Kickstarter United said on Twitter. "And to all tech and creative workers looking to fight for your rights, this is only just the beginning!"

The next step will be for the union to go to the bargaining table, where a committee of union members will negotiate a contract with Kickstarter's leadership based on their concerns and issues.

"Employees will come together to decide what they want to prioritize at the bargaining table," Clarissa Redwine, a former Kickstarter United organizer, told Salon via a text message. Issues like "fighting gender discrimination, creating clear growth paths, and decentralizing product decision," which employees have been galvanizing around during organizing efforts, will likely be discussed.

Organizing at Kickstarter started after the company's leadership made the decision to take down a funding page for a comic book called "Always Punch Nazis." Right-wing site Breitbart accused Kickstarter of violating its own rule that prohibits projects that encourage violence. Kickstarter employees reviewed the comic book project and determined it did not violate company guidelines, but the management disagreed and pulled the fundraiser. As NBC News reporter April Glaser, who has been reporting on Kickstarter United's organizing efforts explained: "Workers grew concerned that their bosses were giving in to demands from far-right trolls."

The path to the unionization vote was not a smooth one. In May, CEO Aziz Hasan told employees that the company would not voluntarily recognize the union. In an email to staff, leaked to The Verge, Hasan said a union would "significantly change the way we operate and work together." In September, Glaser reported for Slate that the company fired two employees, both who were organizers — including Redwine.

Hasan said in a statement that the company supports and respects the decision.

"Our mission has been common ground for everyone here during this process, and it will continue to guide us as we enter this new phase together," Hasan said.

It will be interesting to see what the contract unionized employees negotiate, and if the move sets fire in the tech industry. As Salon has previously reported, the blue-collar workforce within the tech industry is certainly no stranger to unions; technicians and other workers at companies like Verizon and AT&T are unionized. Likewise, digital journalists are rapidly unionizing, including at Salon.

Yet the effort to organize white collar workers in tech, such as software engineers and data analysts, is novel. It also signals that traditional tech perks — like free lunch, unlimited vacation days and cool company outings —  that were used to attract and retain employees, might no longer be a viable way for Silicon Valley-like companies to exploit their employees and convince them that they have their best interests at heart.

Kickstarter's headquarters is located in a bright Brooklyn building, where employees enjoy perks like a rooftop garden, free snacks, free lunch on Thursdays, and free cold brew coffee on tap.

"This is a tipping point and all of tech is watching," Redwin added. "Both management and workers now know it's possible . . . The fire has been lit."

In a podcast interview with The Wharton School of the University of Pennsylvania, author Dan Lyons, who wrote "Lab Rats: How Silicon Valley Made Work Miserable for the Rest of Us," explained that Millennial workers aren't as enamored of clichéd tech industry perks as the mainstream media has depicted.

"It's amazing how many people in their twenties I talked to who said the one thing they really want and they've never had is a job with health insurance," Lyons said. "They're starting to figure out that, 'Oh, we got tricked. We got distracted by all this fun and kooky stuff over here, and they changed the deal on the back end for us.'"

The tech industry was once a bastion of libertarianism, but workers are understanding the common yet subtle ways that their employers exploit them. Indeed, Kickstarter's news this week is likely a source of inspiration for tech workers who are trying to follow suit.