"The Ringmaster": When a documentary about the world's best onion rings serves up a sobering twist 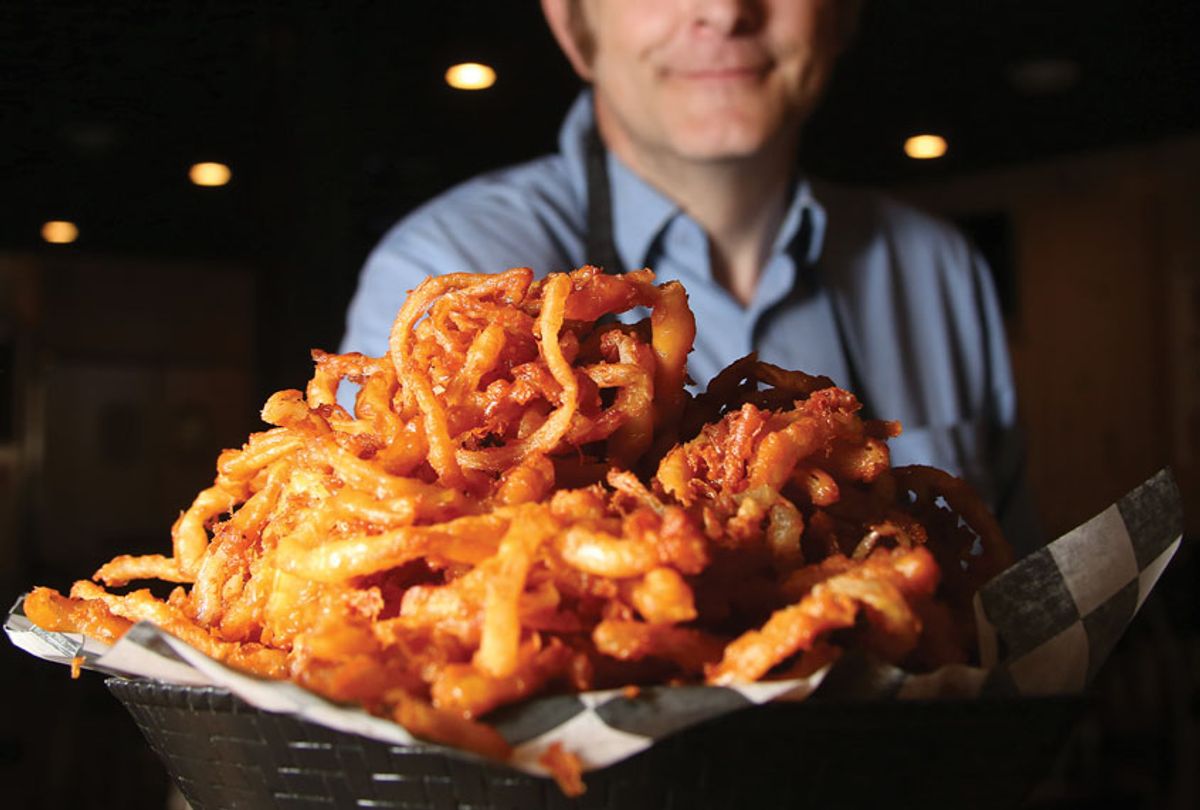 Well, actually, the film isn't entirely about onion rings; rather it is about Zachary Capp's efforts to make a documentary about Larry Lang's onion rings. Capp wants to propel this aging chef's signature dish from a single restaurant to the world stage. Alas, things don't quite go as planned.

"The Ringmaster," directed by Molly Dworsky and Dave Newberg, chronicles how Capp, who has an addictive personality — he is a reformed gambling addict — tries to better Lang's life. However, he manipulates and arguably exploits the chef, for the sake of his self-funded film. (Capp spends boatloads of his inheritance making his documentary over three years until his colleagues tell him, "Enough!")

The humble Larry, who was making his rings in a local saloon, was reluctant to be part of the film. He is also blasé in participating in what might have been "The Greatest Onion Ring Moment in the History of South Dakota" —when Capp encouraged Larry to make his rings for the band KISS at the Badlands Motor Speedway and serve as the operation's concession (and leave his job). A later prospect, equally fraught, involves Larry making the rings as a possible concession for the Las Vegas Raiders football team.

"The Ringmaster" shows how things turned out for both Larry and Zach, and it is disorienting for both. In a recent interview, Capp spoke with Salon about his "The Ringmaster," his addiction, and those onion rings.

The project started as a possible TV pilot about Larry's onion rings and then became a documentary about you and Larry. One gets the sense that there are, pardon the pun, too many cooks. And the film shows writers being added, crew members exiting the project, and other complications that occurred during the three years it took to make "The Ringmaster." Can you talk about the strange journey of the project?

This film was a labor of love for me. I wanted to pay homage to my late grandfather, Martin, who was a big philanthropist. I also wanted to pay homage to Michael and Olive Lang who created this amazing restaurant and onion ring recipe in 1949. I was blinded by my own ambition. The final film is not the one I set out to make by any means. I resisted what it became, because I had to open up about myself and my demons and be very personal. I'm very grateful that Dave and Molly, the directors, helped me see the bigger picture and what the film could become. Because I was so close to the project, I was focused on creating a happy ending for Larry and his family and lost sight of the storytelling.

What did you learn about filmmaking from making "The Ringmaster"?

[Laughs] Make sure your subject is 100% on board with the movie. Molly [Dwosky, the co-director] is from Minnesota, and she calls it, "Minnesota nice," which is when people in the Midwest say yes when they mean no. When Larry told me he was on board with the project, maybe he wasn't. It's for the audience to decide. But Larry and his sister Linda love the film and are happy it [honors] their family's food legacy. Linda was a big ally for the production and helped us see it through. She rolled up her sleeves and made it all happen. Without her participation and enthusiasm, there wouldn't be a project.

While wanting to change Larry's life for the better is noble, Larry was reluctant to appear in the film. I realize there would be no doc if you had not pushed for Larry's success, but at what point, should you have left Larry alone and not pushed for a "happy ending"?

I always had the best of intentions in making this film, but that doesn't translate into reality, unfortunately. The truth is Michael's restaurant was a 5-star experience in Nobles County, Minn., and when the restaurant burned down, wherever Larry went, the rings went with him, and the masses found him. I couldn't accept that this is what happened to him.

This film is about addiction. I am a recovering gambling addict. I didn't see the signs as I pursued a happy ending for this man [whom I felt] deserved more. I certainly have regrets making this movie, and pushing my subject out of his comfort zone, but had I really known what Larry was experiencing, I would have done things differently.

There are opportunities for Larry to go big with his rings — at the Badlands Speedway, and with the Raiders. How did these opportunities come about, and what, other than financial or filmic, were the benefits to having these handmade rings made on a larger, corporate scale?

You can lead the horse to water and not make him drink. I wanted to make grand scale opportunities, but Larry is a simple man, content with the life he had. The Washington Post food critic called Larry's rings the best in the world. I want everyone in the world to taste them! I wouldn't have gone through all the aggravation of making this movie if they weren't the greatest onion ring in the world. This movie is like an onion there are many layers to the story.

You sank a considerable amount of your inheritance into the film. Can you ballpark a number and determine how you achieved value for dollar?

Compared to most mainstream documentaries, this was made for peanuts, but [my budget] was around $200,000. I just kept going and did what I had to do to tell the story. I'm grateful for my crew who saw the bigger picture and help me see what I couldn't see. I think it was worth the money because I learned a lot about myself and people making this movie. I didn't know it was going to be about mental health, addiction, and aging. My new goal is to have proceeds from this film go to medical research. I want to continue my grandfather's philanthropic spirit. Hopefully this film encourages people with addiction to open up about it.

We may not ever know what was in the homemade recipe for the batter that made the rings so great. Will these onion rings live on?

I don't know what is in the batter. It's a secret, and we were very respectful of that. It's a treasured family heirloom. I hope it lives on and the masses get to try them. I don't like onion rings, to tell you the truth, but these made me a believer. They are beloved throughout the entire Midwest. I am hoping they live on.

"The Ringmaster" will screen on Saturday, March 7 at 5:45 p.m. at the DC Independent Film Festival. Tickets are on sale now through Brown Paper Tickets.