"There's a whole operation going on, which is genius," one Democratic strategist says 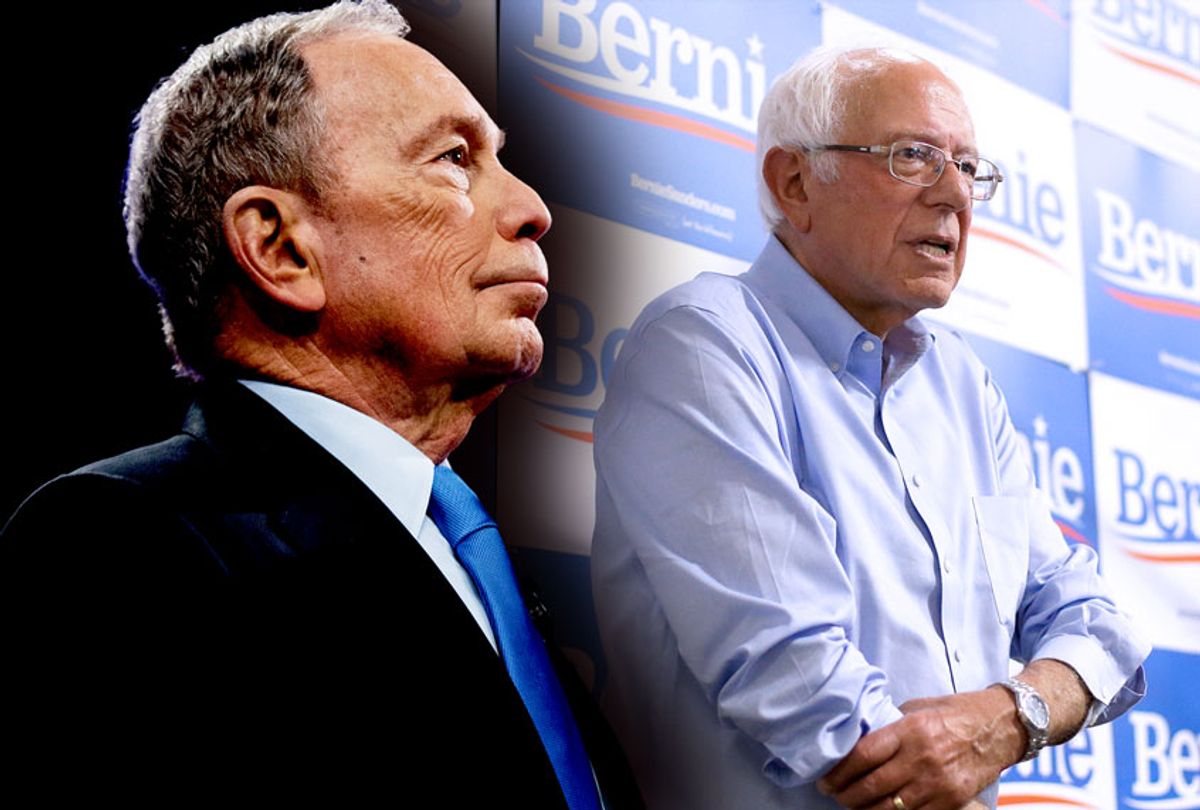 Former New York City Mayor Michael Bloomberg has an entire operation "quietly" working to block the nomination of Sen. Bernie Sanders, I-Vt., at the Democratic National Convention if the surging frontrunner fails to win a majority of delegates, a new report reveals.

Every Democratic candidate except Sanders said at Wednesday's primary debate that he or she would let the "convention work its will" if the leading candidate has a plurality of the vote but falls short half of the 3,979 delegates needed to clinch the nomination on the first ballot. This could lead to a brokered convention and a second ballot, in which about 770 superdelegates excluded from the first ballot under new Democratic National Committee rules could swing a close race.

Bloomberg has quietly moved to shore up support for a potential second ballot by trying to "poach" supporters of former Vice President Joe Biden and other moderate candidates, Politico reports. Those efforts come as election forecaster Nate Silver's FiveThirtyEight model projects the most likely outcome of the crowded Democratic primary is that no candidate clinches a majority of delegates, and rivals worry that Sanders will build an "insurmountable" lead before the convention.

Bloomberg's state-level advisers are lobbying moderate Democratic Party officials who back Sanders' centrist rivals in an attempt to flip and "block Bernie Sanders" in the event of a contested convention, according to Politico. The billionaire's team has reportedly met or spoken with supporters of Biden and former South Bend Mayor Pete Buttigieg and superdelegates in the states of Florida, North Carolina, Oklahoma, Texas and Virginia.

"There's a whole operation going on, which is genius," a Democratic strategist unaffiliated with Bloomberg told Politico. "And it's going to help them win on the second ballot . . . They're telling them that's their strategy."

While other candidates have also reached out to superdelegates, none have staked their candidacy on their help in the same manner as Bloomberg, according to the report.

"We have an enormous apparatus that is constantly reaching out to all types of people for support and to explain why we think Mike is the best candidate to take on Donald Trump," Bloomberg spokeswoman Julie Wood told the outlet.

The report comes after a Bloomberg campaign memo urged the other moderates in the race, all of whom won delegates in the first two nominating contests, to drop out. "They will propel Sanders to a seemingly insurmountable delegate lead by siphoning votes away from [Bloomberg]," it read. Bloomberg has not yet won a single delegate.

He pitches himself as more electable than Sanders, a self-described democratic socialist, despite being roundly criticized for his performance during his very first appearance on the debate stage. Bloomberg has also come under a deluge of negative headlines over his support for New York's racist stop and frisk policy, allegations of sexual harassment and discrimination against women and his past comments about people of color and the LGBTQ community.

Sanders slammed his debate rivals on Wednesday. He was the only candidate to argue that whoever has the most votes should win, while the other five candidates on stage called for the convention "process" to play out.

"Well, the 'process' includes 500 superdelegates on the second ballot," Sanders said. "So I think that the will of the people should prevail. Yes, the person who has the most votes should become the nominee."

Bloomberg aside, Democrats worry a brokered convention would quickly devolve into a "sh*tshow." The overwhelming majority of candidates who won past contested conventions went on to lose in the general election.

Some Democrats worry an ugly intraparty fight could hand President Donald Trump the election and alienate millions of Sanders supporters who could balk at switching their support to a billionaire that ran for mayor as a Republican, opposed raising the minimum wage, contributed millions to Republican candidates, and supported former President George W. Bush, opposed former President Barack Obama.

"There are going to be a lot of people who are going to be very upset if they feel like the election was stolen from them by a cabal of corporate types," top Sanders adviser Jeff Weaver told The Atlantic earlier this month.

And it is not only Sanders supporters who worry Bloomberg and a contested convention, which has historically doomed candidates, would do more harm than good.