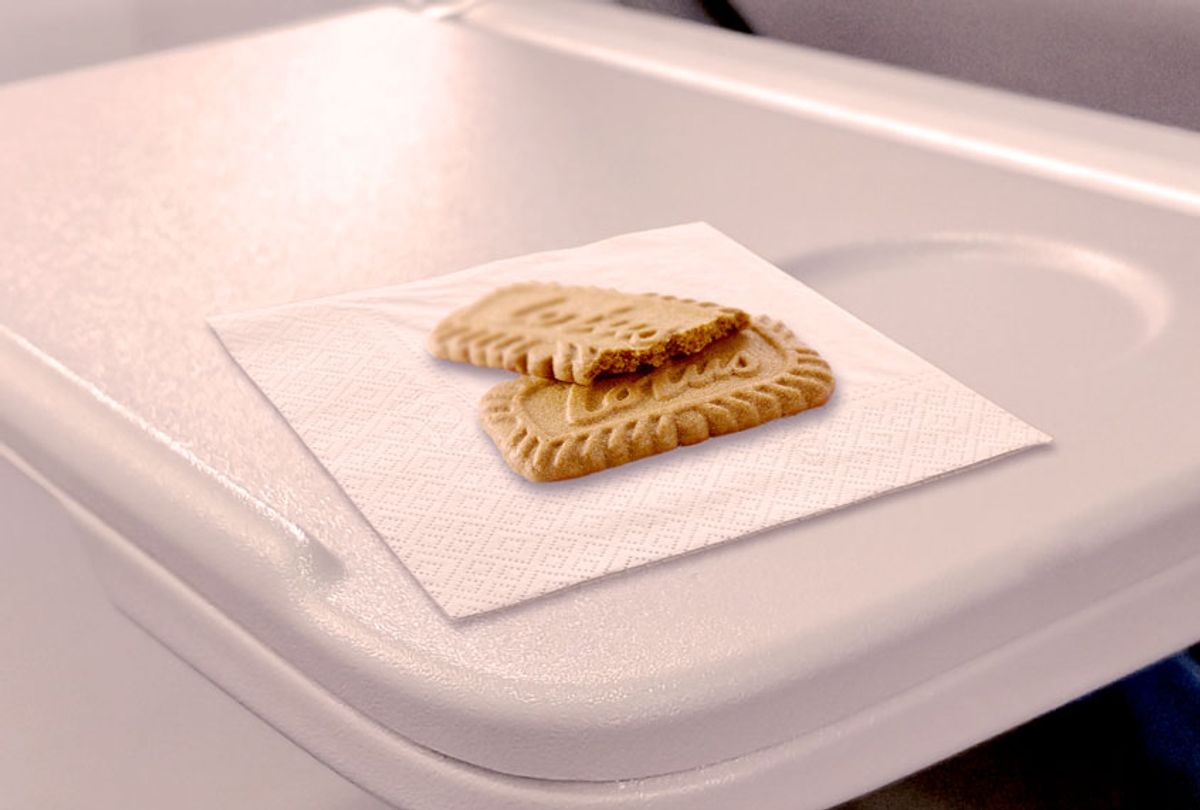 First of all, yes, I am aware there are bigger problems out there in the world right now. Second, United Airlines, how dare you?

The news arrived earlier this month: United Airlines will no longer be offering Biscoff cookies as a complimentary snack on their United and United Express flights. "Our complimentary snack options continue to be a hit and we're always looking for opportunities to introduce new selections," United spokesperson Andrea Hiller callously told USA Today. "We plan to add Oreo Thins into the mix soon and look forward to the response from our customers." Okay, well, here's my response — United Airlines, you people are monsters.

Confusingly, Hiller did not outright confirm the end of the airline's relationship with Biscoff. Speaking to the "Today" show on Tuesday, she said, "The point is to give people options. The stroopwafel is beloved by all, but the Biscoff cookies can be rotated back in. We just want people to understand they are on a rotation, and people are excited about the Oreos, too." Oh really? Really? Who are these people? Bring them to me. Are we to believe that the stroopwafel is "beloved by all" and the Biscoff is not? Let me hear a single airline traveler say, "I am excited about Oreo Thins. I prefer them to Biscoff." Or is this all, as I suspect, just a lie being peddled to us by the powerful sandwich cookie lobby? Clearly, this thing goes all the way to the top.

United seems to currently want to dangle the promise of future Biscoff before us now, toying with us in a crunchy game of cat and mouse. The airline told Refinery29 this week, "Biscoff fans, don't fear, they'll be back on board in May," and in a statement on its Twitter feed said, "We're going to miss the Biscoff cookies too, but we're excited to bring Oreos on board." I feel emotionally manipulated; I feel used, and frankly, I feel like it's going to take a lot of work to get over this betrayal.

As it happens, I have been on four airplanes in the past week, so you can imagine how exhausted and consumed with rage my current state of mind is. Modern commercial flight is about as demoralizing an experience as one can have outside of a DMV. It is a process inevitably punctuated with the grim announcement, "We do have a completely full fight today, and all of the overhead luggage bins are filled." This week I sat at the gate as my flight was torturously pushed to a new departure time in 10-minute increments, as if to intentionally trick me that the plane wasn't late and assure that I was too concerned we'd start boarding soon to go to the ladies' room. I was herded into tiny seats, surrendering my lap to reclining dudes in the row in front of me. I watched as a flight attendant pointed a passenger to a toilet in the back of a plane, because the toilet in the front is a luxury reserved for our social superiors, the business class. But you know what gets a broken soul through this entire trying experience? It's the Biscoff.

I can't remember when I first experienced the small mercy that is the Biscoff. I somehow think of them as a relatively contemporary innovation, and was shocked recently to learn they've been serving the cookies on Delta since the mid-'80s. All I do know for certain is that at some point in my life, I was on a plane, and a flight attendant handed me a cellophane wrapped packet promising me "Europe's favorite cookie with coffee." It was crisp and vaguely Christmassy; it tasted like something I might have had a in a cafe in Berlin, had I ever been to Berlin. It was old-fashioned and elegant, because Biscoff cookies actually are old-fashioned and elegant. Speculoos cookies originated in Holland in the 17th century, and the Belgian Lotus Bakeries company has been cranking them out since 1932. I was hooked from the first bite. I henceforth made my travel booking choices around that cookie. That it seemed so elusive on the ground made it that much sweeter.

Writing in Salon 10 years ago, Francis Lam called Biscoff "The great Delta cookie," saying, "Once you've had them, felt the slight, sudden shock of joy that comes over you while otherwise sitting stuffed and cramped in an unbearably loud machine in the sky, it is possible to find yourself unable to stop thinking about them, to find them popping up in your mind every once in a while when you are tired or hungry or yearning to breathe free."

Cult status soon turned to ubiquity. The Biscoff began showing up in the snack carts of other airlines. Biscoff spreads appeared on supermarket shelves. Concern trolling hot takes about the cookie's status as the "unhealthiest airline snack" appeared. Yet somehow it retained its specialness, a crinkly packet of civility in a world otherwise gone mad. Pretzels are just pretzels, but the Biscoff? It feels like a reward. In my experience, a sincere "Oh, my kids love these!" is invariably greeted with the bestowing of an additional package to bring home to the family (and yes, I do share). Moved your seat to let another passenger sit with her friend? Psst, here's a cookie. Guy next to you snoring? Here's a cookie. We all may just be trained seals, passively accepting our cookie chum to keep us from attacking our fellow animals in this rundown circus we call air travel, but don't for a minute think you can toss us some Oreo Thins — the sort of fare one might find in a common gas station — and think we won't revolt.

It's clear already the change is not being enthusiastically embraced. Writing in Eater, Lesley Suter declared, "In case United's second-to-last rating among domestic airlines wasn't reason enough to fly with someone else, this move has sealed the deal for me. I just can't trust the safety rigors of a company with its snack priorities so obviously out of whack."

My mind knows that I can order a whole carton of Biscoffs right now. I can even bring them with me on my next flight. That's not the point. The point is that gentle nod to decorum that Biscoff brings to the otherwise brutal experience of flying. It says, here is something a little special, a little more adult and refined. It is a gesture that says, I see you have kids at home, or a loud person is next to you, and you could use a little something pleasant today. An Oreo has its place, but it will never tell that tale. Never! But if there's any bright spot in all of this, it's that one airline's miscalculation is another's opportunity. On Friday, Delta tweeted out a photo of the cookies and just four victorious words. "Yep," they assured, "still got 'em."