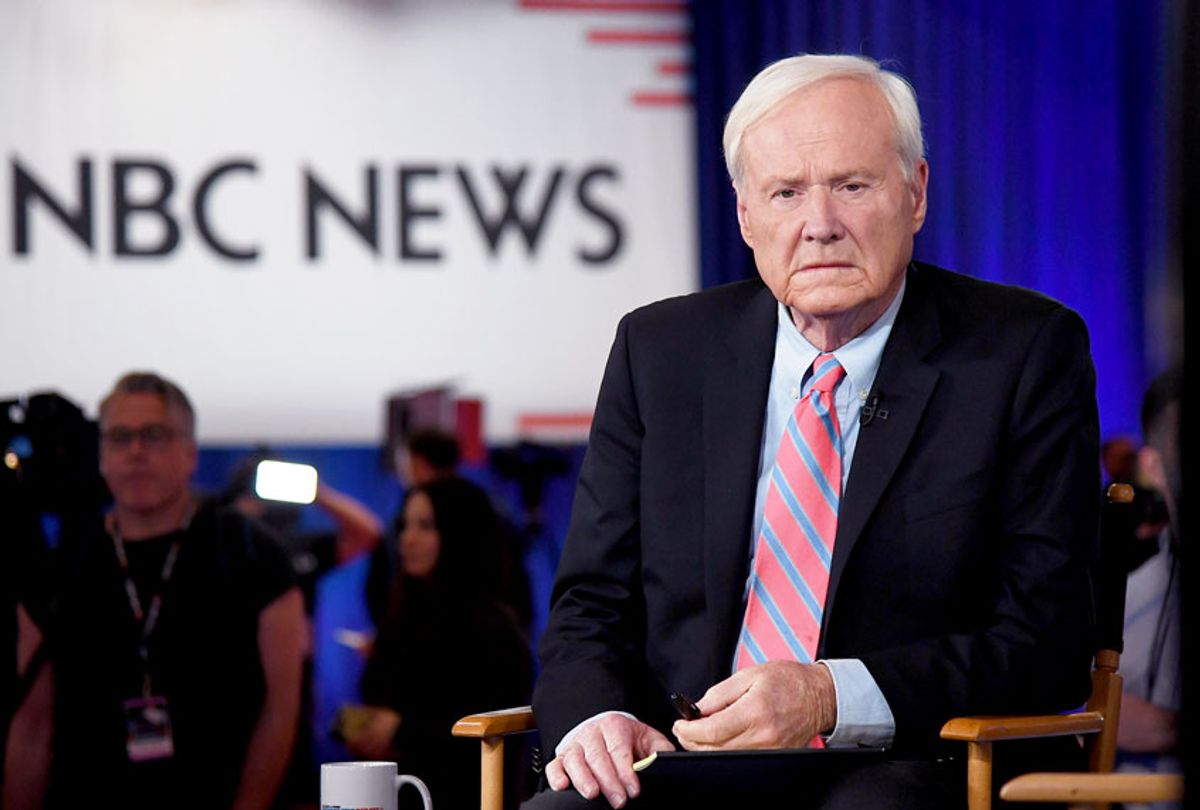 Chris Matthews of MSNBC waits to go on the air inside the spin room at Bally's Las Vegas Hotel & Casino after the Democratic presidential primary debate on February 19, 2020 in Las Vegas, Nevada. Six candidates qualified for the third Democratic presidential primary debate of 2020, which comes just days before the Nevada caucuses on February 22. (Ethan Miller/Getty Images)
--

Matthews reacted to the results in Nevada — where Sanders handily won with roughly 47% of the vote — by likening his campaign to the Nazi army, and the Democratic Party to the French.

"I'm reading last night about the fall of France in the summer of 1940," Matthews said. "And the general calls up Churchill and says, 'It's over,' and Churchill says, 'How can it be? You got the greatest army in Europe. How can it be over?' He said, 'It's over.'"

The comments led to growing calls for Matthews to resign and drew a rebuke from one of the network's own pundits.

"Why is Chris Matthews on this air talking about the victory [of] Bernie Sanders, who had kin murdered in the Holocaust, analogizing it to the Nazi conquest of France?" MSNBC political analyst Anand Giridharadas asked on the air Sunday. "People stuck in an old way of thinking, in 20th-century thinking, are missing what is going on. It is time for all of us to step up, rethink the dawn of what may be, frankly, a new era in American life."

"This is a wake-up moment for the American power establishment," he said, adding that establishment figures lamenting Sanders' rise are "like out of touch aristocrats in a dying aristocracy."

"You know, I have my own views of the word 'socialist,'" Matthews said. "They go back to the early 1950s. I have an attitude about them. I remember the Cold War. I have an attitude towards Castro. I believe if Castro and the Reds had won the Cold War, there would have been executions in Central Park, and I might've been one of the ones getting executed, and certain other people would be there cheering, OK? So, I have a problem with people who took the other side."

IfNotNow, a progressive Jewish group, called on Matthews to issue an apology.

"The second time in as many weeks that an MSNBC commentator has used Nazi comparisons when talking about @BernieSanders, a Jewish candidate with family that was murdered in the Holocaust," the group said in a tweet."We demand an apology from @HardballChris—and we're still waiting for @chucktodd's apology."

The statement referred to "Meet the Press" host Chuck Todd quoting an op-ed that likened Sanders' supporters to Nazis.

"I wanna bring up something Jonathan Last put in the Bulwark today," Todd noted "It is about how… we have all been on the receiving end of the Bernie online brigade—and here's what he says. He says, 'no other candidate has anything like this digital brownshirt brigade. I mean, except for Donald Trump. The question no one is asking is this, what if you can't win the presidency without an online mob? What if we live in a world where having a bullying agro social online army running around popping anyone who sticks their head up is either an important ingredient for, or a critical marker of, success?'"

The comments similarly drew calls for Todd to be ousted from the network.

"MSNBC seems very frightened that ordinary voters, many of whom use the Internet, may actually get to participate in deciding who wins the presidency," wrote senior Sanders adviser David Sirota. [Update: This tweet has since been deleted.]

"'Digital brown shirt brigade.' That's how our Jewish candidate's supporters are being described on the MSM," added Sanders press secretary Briahna Joy Gray. "The contempt shown for ordinary people is really something."

Sanders' popular vote wins in Iowa, New Hampshire, and Nevada have caused palpable consternation at MSNBC, where hosts and pundits have expressed alarm that the Vermont senator would threaten the power of the Democratic establishment, a vow he's made for years and reiterated on Twitter over the weekend.

"The man who is leading in most of the polls throughout the country is not only not a registered Democrat, has not registered as a Democrat, has essentially refused to register as a Democrat, and is now tweeted this morning, it's trending, that the Democratic establishment … will not stop him from getting the nomination," host Joy Reid said during the network's Nevada coverage on Saturday, arguing that Sanders was "essentially sort of kicking to the curb 65 million people who voted for Hillary Clinton, Obama Democrats, people who consider themselves lifelong Democrats."

"No one is as hungry, angry, enraged, and determined as Sanders voters," she added. "Democrats need to sober up and figure out what the hell they are going to do about that."

Sirota responded by questioning why Democrats concerned about party unity were attacking the party's frontrunner.

"The same establishment that calls for unity and civility relentlessly and viciously vilifies Bernie Sanders and the working-class movement powering his Democratic presidential campaign," he wrote.

Fellow MSNBC host Nicolle Wallace accused Sanders of using "dark arts" on the media and dismissed his supporters as a "squeaky, angry minority."

"I have no idea what voters think about anything anymore," she later admitted.

The network's primary coverage also included a series of pundits who echoed the hosts' views on the surging Sanders campaign.

"The entire theory that by expanding the electorate, increasing turnouts, you can win elections, is the equivalent of climate denying," declared longtime Democratic strategist James Carville, who vocally backed former candidate Sen. Michael Bennet, D-Colo., in the primaries. "When people say that, they are as stupid to a political scientist as a climate denier is to an atmospheric scientist."

"If you're voting for him because you think he'll win the election, because he'll galvanize heretofore sleepy parts of an electorate, then politically, you're a fool," he ranted, comparing a Sanders nomination to "political suicide."

Observers questioned why Carville, who rose to prominence as former President Bill Clinton's election guru in the early '90s, was "still invited on TV to give his opinion" after pushing incorrect predictions for decades since.

"In 2008 he declared Obama was unelectable, then wrote a book about how Dems would win every election for he next 40 years," wrote The Intercept's Lee Fang. "The following year nationwide Dems suffered the biggest loss in a century."

MSNBC's collective meltdown over Sanders appears to be unique to the so-called "left-wing alternative to Fox News." CNN analyst Van Jones, a former Obama adviser, mocked the network for its primary coverage on Saturday.

"The establishment is upset and there is another station, another channel, and another few things going on tonight where people are freaking out and melting down all across the country, or at least, all over the airwaves," he said.

The alarmist coverage of Sanders did not begin with the kickoff of primary season. An analysis by the progressive outlet InTheseTimes found that Sanders "received not only the least total coverage (less than one-third of Biden's" on the network, "but the most negative."

"You can feel the disdain they have for Bernie Sanders's supporters," Sanders campaign manager Faiz Shakir told Vanity Fair earlier this month. "It's a condescending attitude: 'Oh, they must not be that intelligent. They're being deluded. They're being conned. They're all crazy Twitter bots.' My view is that there's a bit of detachment from MSNBC and the people who this campaign gets support from. It feels like they're covering progressives from an elitist perspective."

Shakir credited CNN with trying to "diversity their voices" and said even Fox News has been "more fair than MSNBC."

"That's saying something," he said. "Fox is often yelling about Bernie Sanders's socialism, but they're still giving our campaign the opportunity to make our case in a fair manner, unlike MSNBC, which has credibility with the left and is constantly undermining the Bernie Sanders campaign."