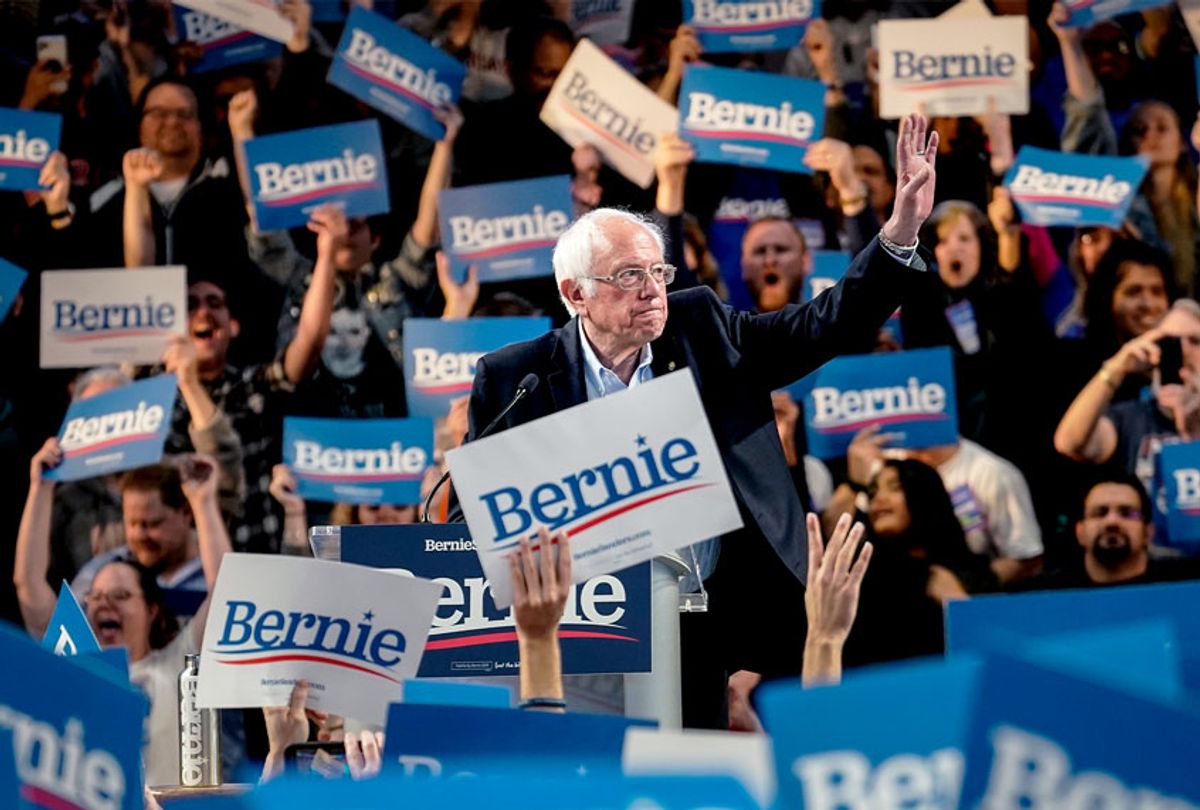 Democratic presidential candidate Sen. Bernie Sanders (I-VT) waves to the crowd during a campaign rally at the University of Houston on February 23, 2020 in Houston, Texas. With early voting underway in Texas, Sanders is holding four rallies in the delegate-rich state this weekend before traveling on to South Carolina. Texas holds their primary on Super Tuesday March 3rd, along with over a dozen other states. (Drew Angerer/Getty Images)
--

For the third straight Democratic presidential contest — the first three of the 2020 election — Sen. Bernie Sanders won the most votes of any candidate in a still crowded field. And for the third straight election, a strong majority of voters indicated a preference for Sanders' premier policy proposal, Medicare for All.

Vermont's Independent senator, a self-described democratic socialist, is now the clear frontrunner for the Democratic nomination after his big win in Saturday's Nevada caucuses. Sanders was also a serious contender in 2016, but narrowly lost the Nevada caucuses to Hillary Clinton, a major blow to his prospects at the time. This year, he built upon his progressive coalition by pulling in diverse support in the first state with a sizable block of nonwhite voters. Sanders dominated among Latino voters and ran close behind former Vice President Joe Biden among black voters, with the result being a victory margin over Biden — who until very recently was the national frontrunner — by nearly 30 percentage points.

In Nevada, as in both Iowa and New Hampshire, about 6 out every 10 voters in both entrance and exit polls said they supported eliminating private insurance and creating a single-payer system like the one Sanders and Sen. Elizabeth Warren both support. Among Nevadans who supported a single-payer plan, according to entrance polls from Edison Research, 49% said they were backing Sanders — more than three times that of any other candidate. Even as the leaders of the powerful Culinary Union, the state's largest, opted to publicly oppose Sanders' Medicare for All plan without endorsing another candidate, he won 34% of caucus-goers from union households, and crushed other candidates among culinary workers specifically.

Sanders has long been a critic of the Affordable Care Act, Barack Obama's signature legislative accomplishment. Sanders has argued that it doesn't go far enough toward creating a single-payer health care plan, similar to the programs found in most developed democratic nations.

"We are the only major country on earth that doesn't guarantee health care to all people as a right and yet we end up spending much more than they do," Sanders said five years ago, during his first run for the White House. "So I do believe that we have to move toward a Medicare for all, single-payer system."

Back then, nearly 80% of Democratic voters and a majority of Americans overall supported Medicare for All. Now, entrance polls reveal that Democratic voters in all three of the first presidential contests of the 2020 race show strong support for the single-payer insurance option. Back in 2015, seven in 10 Democrats and Democratic-leaning respondents agreed with the statement, "it is the responsibility of the government in Washington to see to it that people have help in paying for doctors and hospital bills." In 2020, health care was the number one issue for voters in all three of the first primary states.

There are strong indications that Medicare for All may even play well in the general election against President Trump, with 50% of swing voters in a Kaiser Family Foundation poll naming health care as the top issue that would make them more likely to vote for the Democratic candidate. About the same number of swing voters back Democrats over Medicare for All specifically as oppose them over the issue.

Although this goes unmentioned in the increasingly hysterical cable news coverage, most House Democrats already support a Medicare for All bill, including several members of the fiscally conservative Blue Dog caucus. Perhaps that's because researchers at Yale and Harvard have found that Medicare for All reduces costs, while a public option — as proposed by Biden, Pete Buttigieg and other moderate candidates challenging Sanders — would make health care more expensive.

"The advantage of Medicare for All, which is much closer to how the rest of the world provides health care to their residents, is that you can achieve universal coverage at a lower cost,"  Larry Levitt, senior vice president for health reform at the Kaiser Family Foundation, explained to CNBC. Medicare for All polls well, Levitt further explained, because "Medicare is a very popular program, so the idea of expanding it to everyone is popular as well."

Mainstream pundits have predictably reacted to Sanders' surge with an epic freakout devoid of any reflection on the material issues underlying his support.

"This is the first time I think Wall Street has taken Bernie Sanders very seriously," Payne told Fox viewers. "Molina Health, one of the biggest health insurance in this country, is down eight percent. United Health is down over six percent," he explained. "Anthem is down five percent. Hospital stocks are getting hit." Payne's comments come after billionaire hedge fund manager Leon Cooperman told CNBC that he sees Sanders as a "bigger threat [to the stock market] than the coronavirus." Cooperman's over-the-top comparison looks like reasoned analysis in light of MSNBC host Chris Matthews' likening of the Sanders campaign to the Nazi army. (A comparison for which Matthews has apologized.)

As with Trump's 2015 run, increased media scrutiny of Sanders, although belated, has already proven embarrassing — for the media. Sanders' willingness to call himself a democratic socialist may set him apart in American politics. But as opinion polling repeatedly shows, his signature proposal is hardly out of step with American voters. Any analysis of Sanders' rise or any "electability" argument that treats him as a bizarre "fringe" candidate selling outlandish proposals ignores one blatantly obvious fact: Most Americans agree with him.