"Greed," a satire about the filthy rich, is as subtle as Steve Coogan's blindingly white teeth 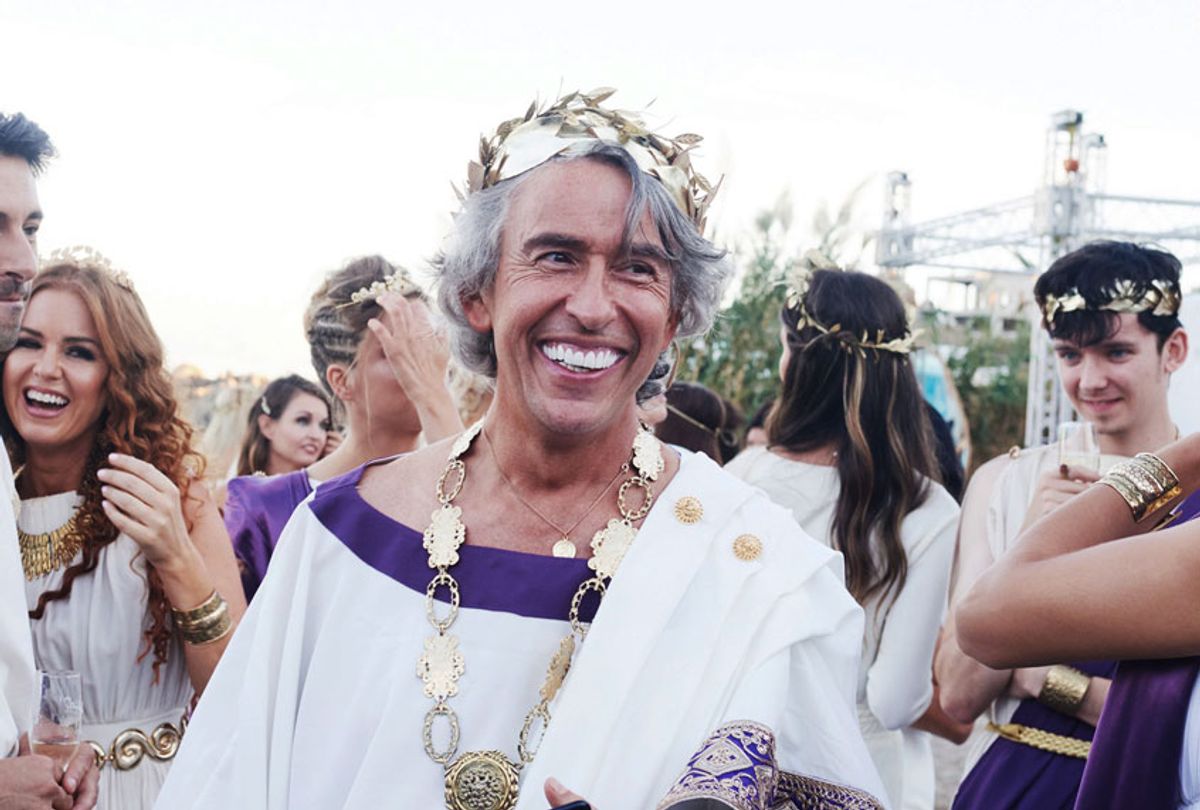 At the end of writer/director Michael Winterbottom film, "Greed," there is a statistic that claims that, "The 26 richest men own as much wealth as the 3.8 billion poorest people." Income inequality is hardly news; moreover, it rarely provides a fun night at the cinema. Yet Winterbottom probably figured more people would appreciate seeing Steve Coogan play another smug, obnoxious-comic a**hole character than would flock to see a documentary about the unfair conditions for underpaid female employees in Sri Lankan sweatshops. So, the filmmaker shoehorned his preachy sociopolitical messages into a toothless satire featuring an amoral character.

The film introduces Sir Richard McCreadie (Coogan) as the "King of High Street," but another character more aptly describes him as, "A self-made man who worships his creator." To the public, Sir Richard made his money by selling cheaply made clothing at a discount. However, the facts behind his finances are that they were all obtained through asset trading and tax evasion, as well as exploiting his suppliers, negotiating deals for property, turning public companies private (by buying board control), and other legal but immoral means. Any parallels to British fashion businessman Sir Phillip Green are entirely intentional despite the credit that this is a work of fiction.

"Greed" opens with McCreadie preparing for his 60th birthday bash on the Greek island of Mykonos. He imagines a gladiatorial experience, complete with a newly built amphitheater and a live lion. The decadence of this bacchanal will, of course, know no limits; McCreadie wants to provide "Bread and Circuses" for people, and perhaps distract them from the extent of his hubris.

The best bits in the film showcase McCreadie, whose nickname is the unimaginative "Greedy McCreadie," behaving badly. And Coogan plays him with his characteristic zeal. There is, however, only a certain amount of fun to be had watching Sir Richard dress down an employee (Charlie Cooper) with withering insults or insisting that Syrian refugees leave the public beach where he wants to host his party. (Cue the end-credit statistic that Greece is host to 75,000 Syrian refugees).

Moreover, the Syrian refugee narrative is heavy-handed as it becomes another of Winterbottom's polemical issues. A scene in which McCreadie's daughter Lily (Sophie Cookson), who is shooting a reality series, delivers food to the refugees but then takes it away to do a reshoot, prompting chaos, feels as tired and as contrived as skewering reality television itself.

Likewise, a subplot involving Sir Richard's biographer, Nick (David Mitchell) also feels useless. Nick interviews his subject's various "friends," colleagues, and family members, including McCredie's brassy mother (a terrific, but underused Shirley Henderson) and his ex-wife, Samantha (Isla Fisher, delicious). The stories of his time at school, where young McCreadie (Jamie Blackley) gambled and got the best of his fellow students, teachers, and headmasters, are amusing. The scenes of him in 1980 Sri Lanka, negotiating for cheap wages and even stiffing a cab driver are more telling.

Nick's character, however, is an idiot who can put both feet in his mouth when he speaks. In one scene, he specifically asks to be talked down to. He really should have been a savvier foil, playing dumb to gain McCreadie's trust, for later evisceration. This would have created some frisson in a film that needs some dramatic tension; instead, the reason for Nick's blind allegiance to his subject is revealed, perhaps, in the film's title.

Surprisingly, the hero of the piece arrives in the form of Amanda (Dinita Gohil), a Bangladeshi assistant whose backstory involves her mother's tragic experience working for one of the factories that provides McCreadie's stores with products. That is deliberately worded; Sir Richard testifies, in one of the film's many courtroom scenes meant to show how oily McCreadie is, that he does not run the factories, but merely gets the owners/managers to commit to his price.

Amanda plays the moral center of "Greed," not just because she has sympathy towards the Syrian refugee children, or because she is demoralized at being asked to dress like a slave for the party, but because she has a hand in helping Sir Richard receive his entirely predictable comeuppance. Given the film's setup, it's impossible not to see how things will play out. Alas, the "payoff" is curiously unsatisfying.

Too much of "Greed" is disappointing. All the supporting characters and narrative layers — the reality TV show, the biographer, the party, the courtroom scenes, the flashbacks within flashbacks, etc. — add only breadth, not depth to a one-joke film. Winterbottom has his characters quote Shakespeare or make references to Greek tragedy, well, because it seems someone had to. When McCreadie's son Finn (Asa Butterfield) references "Oedipus" it is not long before he is lusting after his stepmother (Shanina Shaik) to accompany his murderous thoughts towards his father. This gag feels especially desperate.

The filmmaker bookends "Greed" with E.M. Forester's famous phrase, "Only connect," to make its points about globalization, but this too falls flat. "Greed" often bites off more than it can chew as it tries to be ironic and dramatic in the same scene. The comedy derived from Bulgarian workers hired to build the amphitheater merely positions them as part of a larger, unwieldy spectacle. There are two scenes of Sri Lankan workers washing with well water — as if the point about a lack of plumbing wasn't driven home when it was first seen and discussed. And the Syrians are uncomfortably used as the basis for satire. A scene where McCreadie plays Three-card Monte with them as a way of getting them to move and work for him for free is pointed and unpleasant.

While Steve Coogan is game to play McCreadie, his performance is pitched at a level that cudgels viewers in much the same way the film's soundtrack is used. (Fatboy Slim's "Praise" and ABBA's "Money Money Money," among other tunes, are played at length and for effect). These choices indicate that Winterbottom cannot resist the chance to go for the blindingly obvious. And speaking of blinding, McCreadie's super-white teeth provide another go-nowhere joke.

"Greed" swings broadly at a big target, and still manages to whiff.