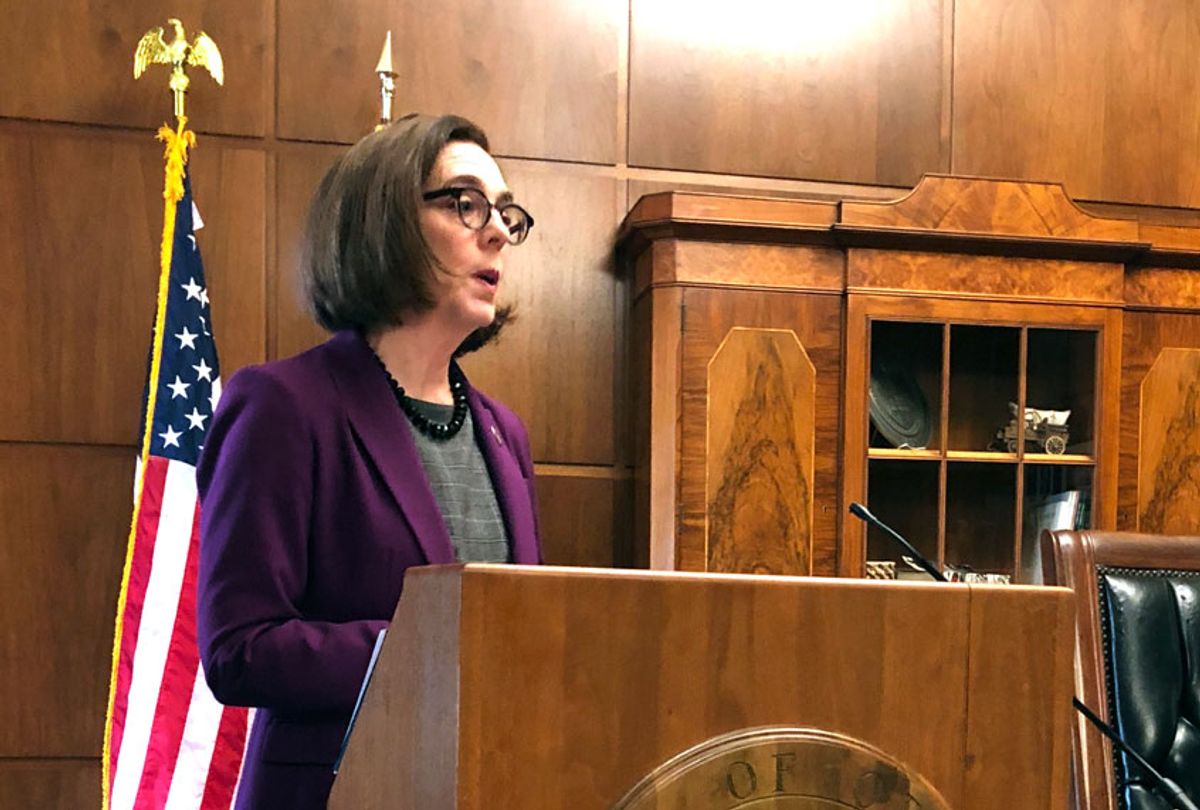 Gov. Kate Brown of Oregon denounces a walkout by Republicans in the state Senate that prevented a quorum on Monday, Feb. 24, 2020 in Salem, Ore. Republican lawmakers are trying to doom a contentious climate change bill. Brown said the Republicans are not against the climate policy but are against the Democratic process. (AP Photo/Andrew Selsky)
--

Republican state senators in Oregon fled the state capitol on Monday in a stunt intended to derail the passage of a climate change bill supported by a majority of lawmakers for the second time in eight months.

Oregon requires two-thirds of the state Senate's members to be present for a quorum, without which the chamber cannot vote on bills. Eleven of the 12 Republican senators fled the state capitol in Salem on Monday to deny the Democratic supermajority a quorum to prevent a vote on a bill to cap greenhouse gas emissions that was approved by the budget committee earlier in the day, The Oregonian reported. The 11 Republicans who walked out represent just 36% of the state's population, according to the outlet.

The cap-and-trade bill would impose a cap on carbon dioxide emissions and require certain industries to obtain "emissions allowances" for every metric ton of emissions. The bill seeks to reduce emissions levels by 80% by 2050. Democrats made several "concessions" to Republicans after the last walkout, exempting entire regions of the state indefinitely. But Republicans still complained that other amendments they had proposed were voted down, according to The Oregonian.

Democrats dispatched the sergeants at arms to track down the missing Republicans who boycotted Monday's vote but were unable to track them down. Republicans similarly fled the state last summer to prevent a vote on the bill, with some hiding out in Idaho cabins.

Senate President Peter Courtney, a Democrat, told The Oregonian that Republican Leader Herman Baertschiger Jr. "did leave the door open that maybe they'd come back" but admitted that it's unclear whether GOP lawmakers would return without a deal that would send the measure to a voter referendum. Oregon voters defeated similar measures in 2016 and 2018.

Courtney said he would not ask Gov. Kate Brown to send state police troopers to find the Republicans, as he did when they fled over the summer. Senate Republicans also walked out last year to stall a business tax and to block vaccine and gun control bills.

"If (Senate Republicans) don't like a bill, they need to show up and change it or show up and vote 'no,'" Brown said at a news conference on Monday, arguing that the Republicans "have chosen to take a taxpayer-funded vacation … Oregonians should be outraged and I am, too."

"Walking out on the job is a dereliction of duty," said Senate Majority Leader Ginny Burdick, who called the stunt "dishonorable and disrespectful."

House Speaker Tina Kotek called the walkout "a crisis for our democracy."

"This is not a game. Voters elected us to do our job," she said. "The members who refuse to show up and do their jobs are saying to a large majority of Oregonians: your vote doesn't matter."

Republicans claimed that it was the Democrats' fault they walked out.

"Democrats refused to work with Republicans and denied every amendment that was presented. Pay attention Oregon — this is a true example of partisan politics," Baertschiger said in a statement.

"Sometimes a boycott is the best way to stop bad laws from happening to good people," added Republican Sen. Kim Thatcher, who is running for secretary of state.

The boycott derailed a number of other bills, which must be voted on in the next two weeks before the chamber's 35-day session concludes. The legislature plans to take up bills that would raise taxes on wealthy investors, ban certain pesticides, require safe storage of guns and ban discrimination based on hairstyles associated with race. The Senate is also expected to vote on a homeless shelter funding bill and a relief funding package for residents hit by flooding.

The Senate rushed to pass a number of bills in a matter of hours after Republicans came back from their boycott last year. Courtney told The Oregonian that he hopes a similar situation will play out and Republicans will return in time to vote on the legislation. Gov. Brown left open the possibility of calling a special session that would require lawmakers to return after the March 8 deadline.

Brown said at her news conference that the bill was too important to delay.

"It is time for us move forward," Brown said. "Our children are depending upon us. Our environment is depending upon us and frankly, the entire world is watching. We need to get this done now."