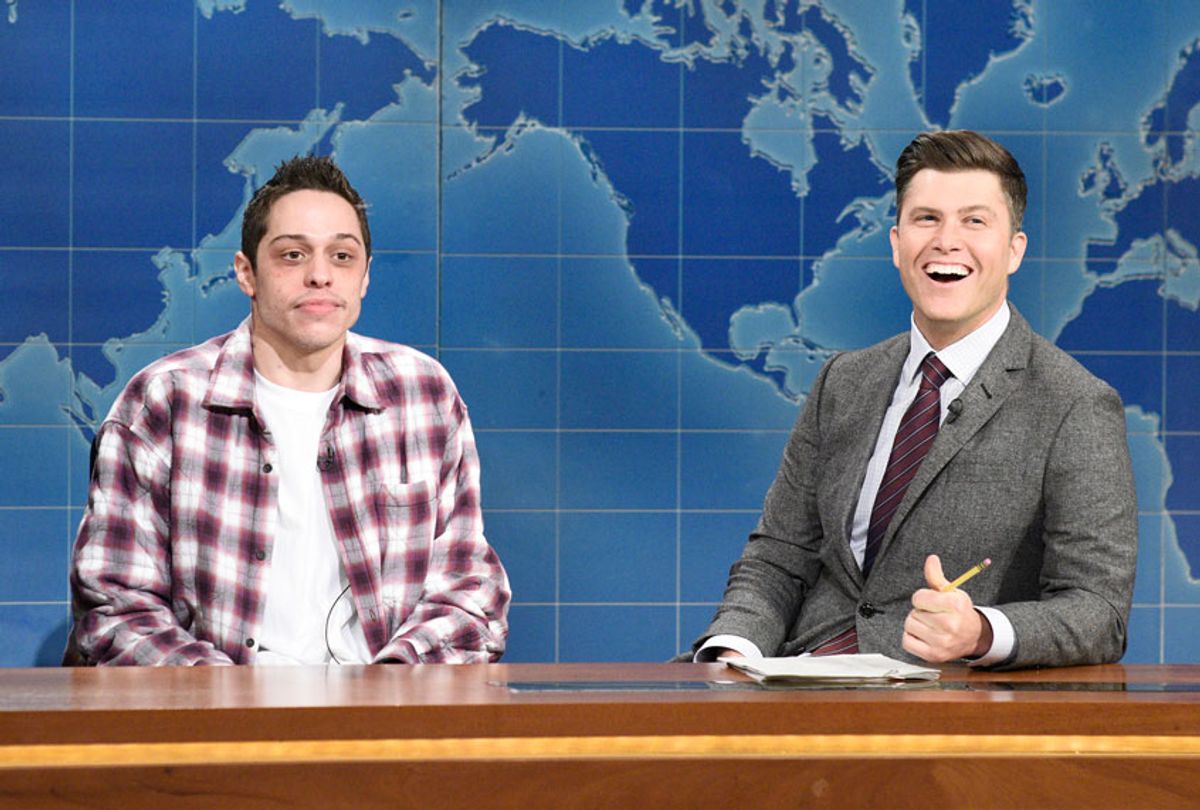 Pete Davidson and Colin Jost during Weekend Update on Saturday, December 21, 2019 (Will Heath/NBC)
--

Pete Davidson is having second thoughts about staying with "Saturday Night Live" at least in part because he feels the cast members mistreat him, according to a recent interview.

"I have a lot of conversations with people [about leaving 'Saturday Night Live'] because it's a hard thing to do," Davidson told radio and television personality Charlamagne tha God on Monday in the YouTube video "Live Your Truth: An Honest Conversation with Charlamagne Tha God and Pete Davidson." "You don't ever want to pull the trigger too early. Everybody's always been like, 'You'll know when you know, and it'll be alright.' I personally think I should be done with that show because they make fun of me on it."

Although Davidson praised creator and producer Lorne Michaels, saying he's been "like a father figure to me," he described the overall work environment as "cutthroat" because "everyone is trying to get their s**t on. Everyone wants to be the next thing." Instead of a "loving, caring" atmosphere, Davidson said, "They don't give a f**k, at the end of the day."

Davidson also discussed being ridiculed by his fellow cast members.

As Davidson told Charlamagne Tha God, "When I'm not there, they'll be like, 'Huh huh huh, Pete's a f***ing jerk face.' And you're like, 'Whose side are you on?' I have a weird feeling in that building where I don't know whose team they're playing for, really, if I'm the joke or I'm in on the joke."

Although he added that he would be a "hypocrite" if he asked the other repertory players to stop making jokes about him, he said, "If I'm just fodder now, though, maybe I shouldn't be there." He also observed that when his colleagues ridicule him and then the camera immediately cuts to him, it is difficult to get the audience on his side "without being like, 'Look at this f**king idiot.'"

He concluded, "They think I'm f**king dumb. I'm literally painted out to be this big dumb idiot."

"Saturday Night Live" has poked fun at Davidson both while he was absent and when he was present on the show. In an Oct. 5 episode, Weekend Update co-anchor Colin Jost joked that Davidson — who was reportedly absent to film scenes in James Gunn's upcoming film "The Suicide Squad" — was actually a man who had driven his car to a musical festival and "still cannot remember where he parked his car a week after the show." In the following week's episode, Davidson joked that Jost might suffer the same grisly fate as a character in the recent film "Joker" who also mocked a mentally ill individual. (Davidson attended mental health rehab in 2016 and has been diagnosed with borderline personality disorder.)

In 2018, after Davidson aroused controversy for joking about Rep. Dan Crenshaw, R-Texas, only having one eye (Crenshaw lost the eye while serving in Afghanistan), "Saturday Night Live" invited Crenshaw onto the show to ridicule Davidson. Crenshaw appeared to say that Davidson "looks like if the meth from 'Breaking Bad' was a person. He looks like a troll doll with a tapeworm. . . .  He looks like Martin Short in 'The Santa Claus 3.' By the way, one of these people was actually good on 'SNL.'" Davidson appeared next to Crenshaw during the segment and appeared to laugh at the jokes at the time.

The comedian appears in his new Netflix special, "Pete Davidson: Alive From New York," streaming now, and in the comedy "Big Time Adolescence" in select theaters on March 13 and on Hulu on March 20.