Trump goes full racist, of course, to cover up coronavirus lies and incompetence

Trump's ignorance and hostility to science makes situation worse — so he turns to an old standby: race-baiting 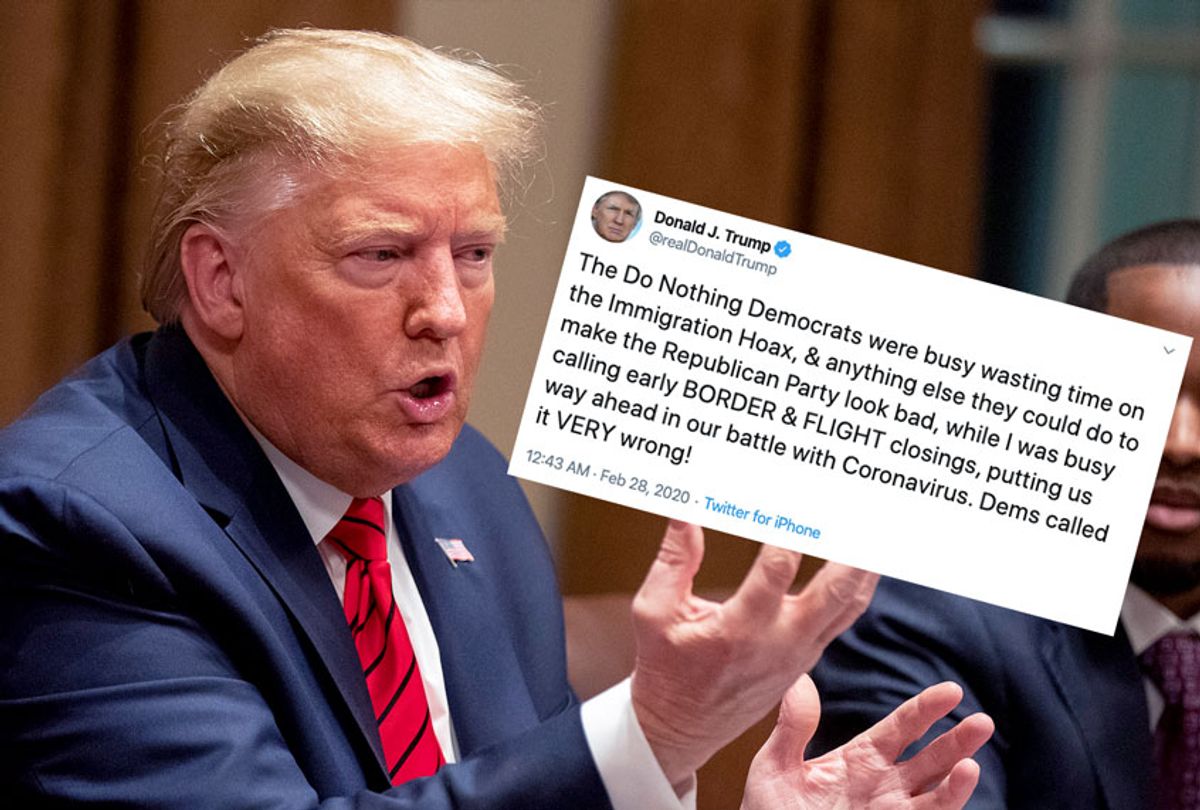 Donald Trump's sole interest, when it comes to the coronavirus, is trying to find some way to prevent this impending public health crisis from affecting his re-election chances. His utter lack of concern for the health and safety of Americans, including his own supporters, is unsurprising — after daily exposure to the man for years, we should know by now hat he lacks normal human feelings such as empathy or concern for others. Indeed, the administration's response to the threat of this virus spreading in the U.S. has been focused mainly, if not solely, on propaganda — seeking to create the illusion that things are under control, instead of doing the hard work of actually trying to get things under control.

But thanks to Trump's utter lack of credibility, even the ham-fisted propaganda efforts aren't working. He held a press conference Wednesday that was clearly intended to bamboozle the public just enough to stabilize the stock markets (which Trump thinks hold the key to his re-election). But the whole thing was a disaster, even by propaganda standards, with Trump's dishonesty, hostility to scientific experts and massive incompetence on full display. Rather than stabilizing the markets, his performance seems to have made things worse — the Dow Jones had its biggest one-day plunge in history on Thursday.

Trump reacted in a way that's sadly unsurprising: He amped up his racism, grasping desperately for nonwhite people to blame, rather than admitting he's not up to the task of handling this crisis.

In a series of hyperventilating tweets in the middle of the night, Trump whined that the "Do Nothing Democrats were busy wasting time on the Immigration Hoax" while "I was busy calling early BORDER & FLIGHT closings." Most responsible Americans with day jobs were sleeping, and our president tried to focus on the "BIG NEWS!" that federal money was being cut off to "Sanctuary Cities," a slur conservatives concocted for cities that prioritize public safety over harassing undocumented immigrants.

It's brutally obvious Trump only cares about manipulating public opinion to keep the markets from plummeting, not about saving lives. Rather than putting someone  who cares about science and public health in charge of the coronavirus task force, Trump appointed Vice President Mike Pence, a man who has significant contempt for both. (Pence's greatest hits include denying that smoking kills people and that condoms prevent STI transmission, as well as declaring that prayer works better to stop HIV transmission than clean needles.) Pence promptly added Treasury Secretary Steve Mnuchin and crank pseudo-economist Larry Kudlow to the task force.

These appointments make clear that Pence's goal is to convince investors to stop panicking, and not to address the source of the panic, which is a fast-spreading disease that isn't remotely under control. Kudlow, in particular, has been throwing himself into the propaganda mission, and in the process has lied about the virus being "contained" and demonized legitimate health officials who have been warning that Americans need to prepare for a serious epidemic.

Pence has also thrown himself behind the task, common to fascist leaders everywhere, of censorship. The New York Times, always ready to bend over backwards to portray the administration in the best possible light, characterized Pence's plan to require all health officials to clear public statements with him first as "a more disciplined approach to communications."

It's not. It's about censoring people who have what the administration views as market-threatening (though health-preserving) information to share. Dr. Anthony Fauci, director of the National Institute of Allergy and Infectious Disease, was specifically muzzled, with the Times noting he had "told associates that the White House had instructed him not to say anything else without clearance."

It seems likely that the administration's propaganda-first approach is backfiring, since everyone knows that Trump is a liar and Pence is a sleaze who will openly spread bad health information, if he thinks there's political or financial gain. It's impossible to say for certain, but my guess is that this focus on propaganda over substantial policy has only made the markets more volatile. When the president is an incompetent liar who wouldn't think twice about letting many people get sick, and conceivably die, to boost his chances of re-election, panic is not an unreasonable response.

As much as Pence may wish to muzzle public officials and spin falsehoods, we still have a free press in this country, and new reports are coming out daily chronicling exactly how badly Trump's administration has screwed the pooch.

The mismanagement started even before the word "coronavirus" was a thing. Trump fired the entire pandemic response team in 2018, as part of the administration's war on Obama-era policies, and never bothered to rebuild the team. Trump officials also slashed spending on overseas programs to combat epidemics by 80% two years ago, leading to efforts being abandoned across the globe — including in China, where this outbreak started.

(Conservatives are clinging to an AP "fact check" that denies that Trump cut funding for the CDC, but that fact check is misleading in itself. Overall spending on the CDC may have risen, but the cuts to this specific program are real.)

Now there's a whistleblower at Health and Human Services who says that department employees — most of whom are not medical professionals — were sent to deal with Americans under quarantine at Travis Air Force Base and March Air Reserve Base with no proper training or protective gear. When the workers asked for more help with disease prevention, the New York Times reports, they "were dismissed by senior administration officials as detrimental to staff 'morale.' They were 'admonished,' the complainant said, and 'accused of not being team players,' and had their 'mental health and emotional stability questioned.'"

The first patient believed to have contracted the virus in the U.S. reportedly lived near Travis Air Force Base in the central valley of California, where HHS workers came and went on a daily basis, without following protocols to prevent the virus from spreading outside the quarantine area.

Without even knowing the details, Americans can be perfectly sure of two things: Trump is profoundly dishonest and completely incompetent. So anything the administration says about having this situation under control is going to be read, by most people — including Wall Street investors — as untrustworthy, at best.

This is true even of Trump's supporters, who mostly don't even bother pretending their president is honest, but instead resort to rationalizations about why his lies are OK. That's no doubt why Trump is turning back to Ol' Reliable, i.e., racist demagoguery. He can't convince his followers he's telling the truth about any of this; even they know that's preposterous. But he can remind them why they love their big, orange liar of a leader: Because he dishes out the racist invective they crave. Sadly, many of them care about that more than about whether they or their loved ones or their neighbors are in danger from Trump's lies and incompetence.