"It boggles my mind that this doesn't seem to break any rules." 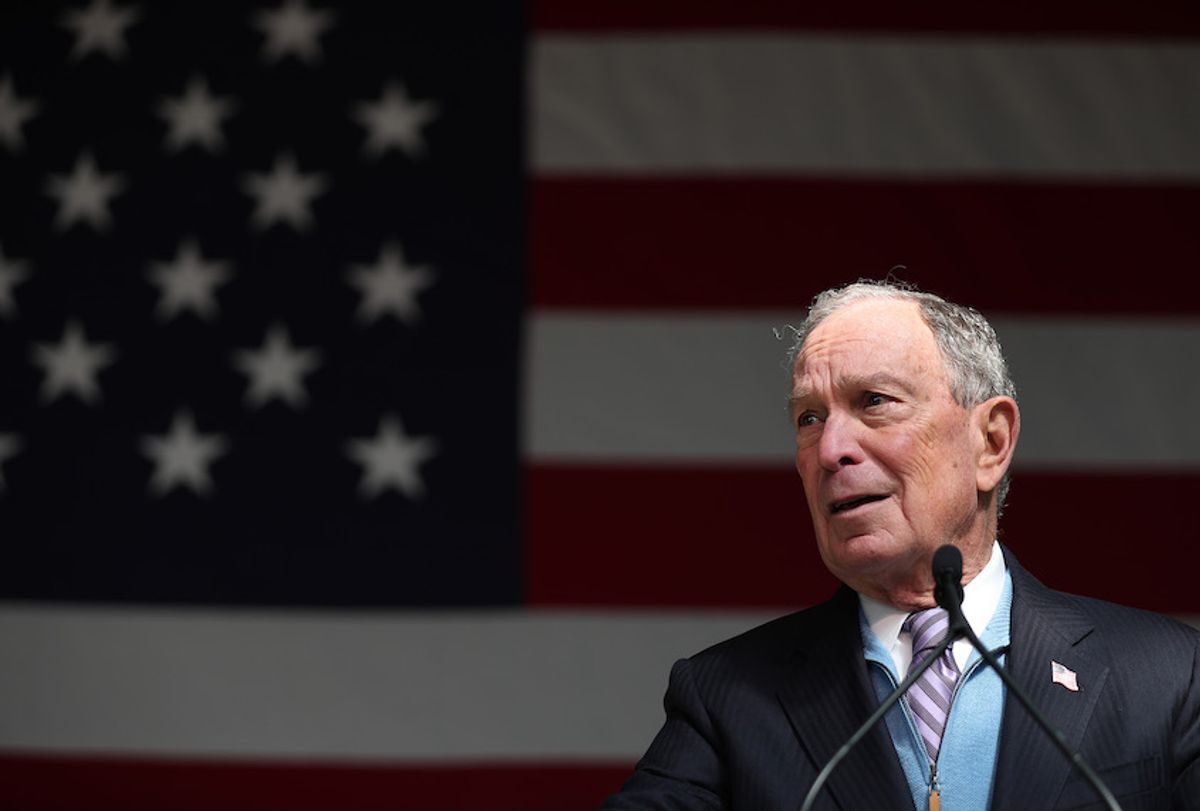 Democratic presidential candidate Mike Bloomberg speaks to supporters during a rally held at The Rustic on February 27, 2020 in Houston, Texas. (Joe Raedle/Getty Images)
--

Former New York City Mayor Michael Bloomberg, the billionaire businessman running for the 2020 Democratic presidential nomination, hired party vice chairs in Texas and California to work on his campaign just before the states prepare to vote in the presidential primaries on March 3 — a move that drew charges from progressives of an attempt buy influence from party elites.

"The Democratic Party has a problem," said Jewish Currents writer Joshua Leifer of the reporting.

According to Lacy's reporting:

Both Brailey and Rooker are superdelegates who will likely vote for the Democratic presidential nominee at the party's national convention this summer. Hiring the leadership of a state party doesn't appear to break any campaign laws.

The apparent legality of the move—despite what was broadly seen as a clear example of corruption—befuddled observers.

"It boggles my mind that this doesn't seem to break any rules," tweeted Lacy's Intercept colleague Alex Emmons.

Bloomberg's hiring of the two vice chairs also struck observers as problematic because of the possibility of a brokered convention in Milwaukee this July which would allow superdelegates to vote from the second round on, giving the unelected party elites an outsized say in the ultimate nominee.

Rooker is one of two members of Bloomberg's campaign staff who also sits on the Democratic National Committee's rules committee, which recommends rules for the convention, the convention agenda, the convention's permanent officers, amendments to the party's charter, and other resolutions. In November, the month he entered the presidential race, Bloomberg gave $320,000 to the DNC, his first contributions to the committee since 1998. (He was a registered Republican from 2001 to 2007, after which he became an independent. He registered as a Democrat in 2018.) He also donated $10,000 to the Texas Democratic Party, where Brailey has been vice chair since June 2018, as well as $10,000 to the California Democratic Party. Brailey, Rooker, and the Bloomberg campaign did not respond to requests for comment on their hiring.

Rumblings of the possiblity party leaders could deliver the nomination to someone other than Sen. Bernie Sanders (I-Vt.), the current frontrunner, if Sanders does not have a clear majority of delegates has sparked outrage from progressives.

"The will of the people should prevail," Sanders said on February 19 at a debate in Las Vegas. "The person who has the most votes should become the nominee."

The optics of superdelegates on the Bloomberg payroll, no matter what the outcome of the convention, raised concerns for progressives. Journalist Michael Tracey referred to an apparent misstatement by Bloomberg during a debate February 25 where the billionaire appeared to almost say he "bought" members of Congress.

"Remember when Bloomberg slipped up at the debate this week and admitted that he has 'bought' Democrats?" said Tracey.

If Bloomberg enters the convention with superdelegates like Brailey and Rooker on his staff, that could wreak havoc on the entire process, said Voter Participation Center communications director Aaron Huertas.