Video games come for the gym — but can they really work as a fitness regimen? 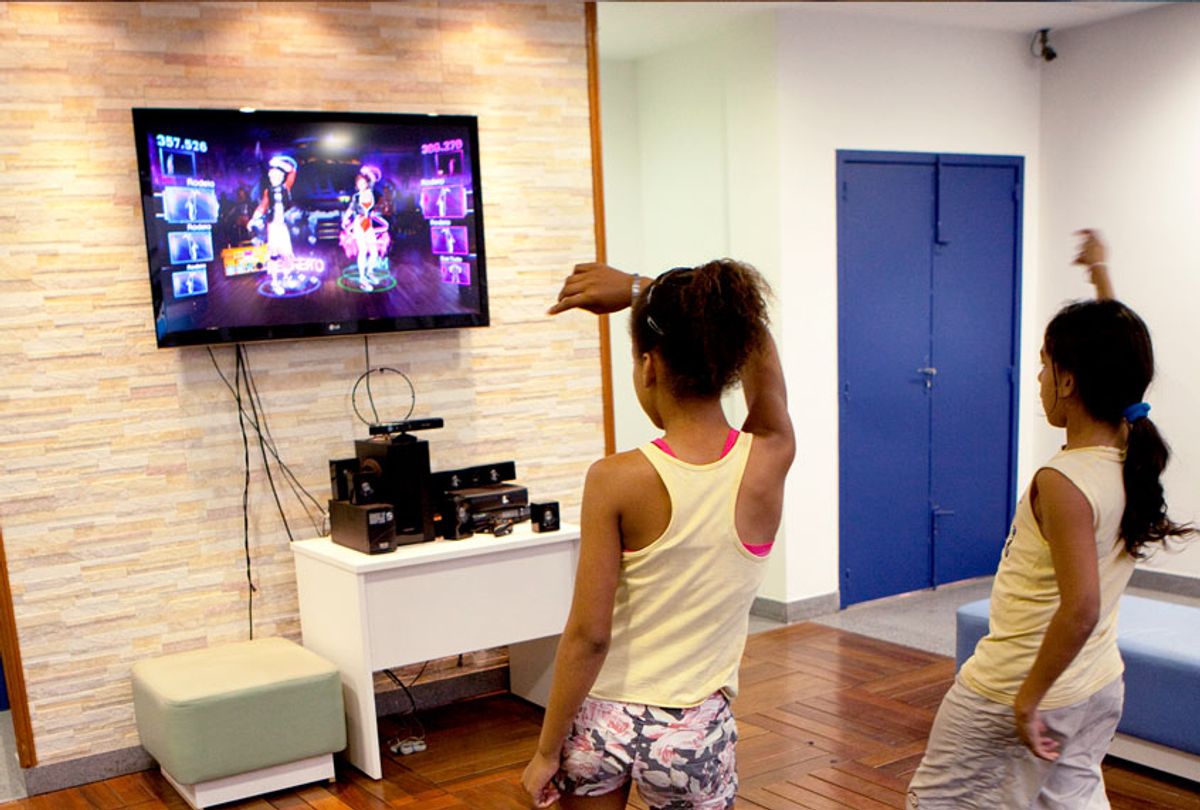 Poor children from favela Complex Alemao dance to an Xbox game in a community center, on September 13, 2012 in Rio de Janeiro, Brazil. The Plaza of Knowledge was built by the municipal government. Favelas are informal settlements, traditionally without electricity, water and sewage services. This favela got a park, learning center, cinema and cable car as part of infrastructure improvements. The learning center has courses and computers available to locals. (Melanie Stetson Freeman/The Christian Science Monitor via Getty Images)
--

As most people with a full-time job, finding time exercise is an eternal struggle for me. I live in New York City, so I certainly walk everyday; but dedicated cardio — well, that's another story. Luckily, I can probably skate by on my youth (I'm 26 years old and relatively healthy) for a few more years until my metabolism catches up with me. Still in the back of my head, I know that if i maintain the status quo, my body won't look the same at 36 or 46.

Enter the video game. For people like me — who already own video game consoles, and who are more apt to spending time indoors — the idea of using a video game to stay fit seems like a win-win. If working out with a video game sounds weird, you may not be familiar with the massive scope of this industry — which continues to grow.

How video games got fit

Video games are now more profitable than the music and film industry combined. As the audience for games grows, it makes sense that the artistic medium has expanded into unusual territory beyond the scope of shooting and fighting games. But in order to give a short history of how fitness and video games merged, you have to wind back to 2006, the golden age of the Nintendo Wii.

The Wii was one of the most successful video game consoles of all-time, selling just over 100 million units. Because of its broad audience, the console became a huge hit in households worldwide. Unlike previous video game systems, the novel innovation in the Wii lay in its controller: rather than a mere hand-held widget with buttons, the remote (cutely dubbed a "Wiimote") included a motion-tracking piece of hardware, such that the remote was aware of its orientation and relative motion. This opened up all kinds of possibilities in gaming: you could swing the remote like a bat in a baseball or tennis game, or use it to simulate bowling.

The easy and intuitive motion control proved accessible to people of all ages, and helped break the stigma many had about video games only being for young kids. The technology also allowed for a Wii-inspired boom in a niche genre, "exergaming."

Exergaming, meaning the incorporation of fitness and physical activity into video games, is perhaps best exemplified in the cult series "Dance Dance Revolution" (DDR) — a movement-based dancing game where the player, while standing on a physical game mat below them, coordinates their dancing in time to music based on instructions that appear on the screen. But DDR did not (at least initially) advertise itself as a fitness game, nor as a game that would specifically improve the health of its players — even though succeeding at the game was a great cardiovascular feat.

Then, in 2008, Nintendo capitalized on the burgeoning exergaming genre by launching "Wii Fit." "Wii Fit" came with a balance board that doubled as a scale. The "game" itself consisted of yoga, strength training, aerobics and balance-based exercises. While "Wii Fit" was praised by critics and was a financial success for Nintendo, it wasn't much of a game. Wii Fit was more of a series of routines and less of a game; it did not command much attention from me nor my family members.

Nintendo's follow-up console, the Wii U, struggled to sell, leading to an era of uncertainty for the esteemed video game powerhouse. This, paired with a mobile game market outperforming their consistent series of handheld consoles, put Nintendo in a tough spot. They needed something big.

They succeeded in 2017, by releasing the Nintendo Switch, which, true to its name, has the primary innovation of being a hybrid home and handheld console whose modes you can switch between. The Switch's unorthodox portability and practicality made it a financial success in a time when Nintendo needed it.

This is all to say that the Switch's success and features provided an opportunity for an exergaming follow-up. Could exergaming on the Switch surpass the fun but forgettable Wii Sports of a decade ago? More importantly, could it possibly fill the missing puzzle piece in my life — you know, the one where I get some damn exercise?

Nintendo released "Ring Fit Adventure" for Switch in 2019. Despite its name, "Ring Fit Adventure" is not a simulation of what it's like to be a jewelry shop clerk; rather, it is billed as an action-RPG exercise game. The game, which retails for $79.99, comes with a pilates tension ring, which one of the Switch controllers can plug into, and a leg strap with a pocket for a controller. The leg strap is attached to your thigh.

Nintendo has a knack for consistency in its gaming franchises; indeed, the controls and "feel" of the games in the "Super Mario" or "Mario Kart" series have stayed consistent from the Nintendo 64 (1996) to now, which speaks to the game-maker's remarkable obsession with creating experiences that are consistent for its players, even across decades.

That makes it more surprising that "Ring Fit Adventure" feels nothing like Nintendo's last attempt at a fitness game, "Wii Fit." "Wii Fit" felt like a fitness tool with game elements haphazardly thrown in; whereas with "Ring Fit Adventure," the two concepts work in tandem.

You play as a silent protagonist who finds a magical sentient fitness ring (mimicking the physical peripheral sold with the game), and who must then save the world from a huge, steroid-filled dragon who is terrorizing the citizens. The setup is simple, even if the premise is patently absurd. There is no complex plot nor multi-layered intrigue. Which is fine — it would probably be distracting to those who just want to get their heartrate up.

Hence, the player runs through levels collecting ingredients, finding clothes that give you power-ups, and fighting enemies. In this sense, it is a classic RPG game in every way, except that everything in the game is done via exercise. To run through the level, you have to actually run. Or, technically, run in place — you don't want to ram into your TV.

It's a clever conceit, but it's also probably the biggest bummer of this game. Running in place can start to feel very boring after doing it for a while. At the least, it is broken up with different obstacles that force the player to do different exercises.

Hence, when you run into enemies you use different types of exercises — different motions, essentially — to do damage and defeat them. The exercise moves have four types: green for yoga, red for upper body strength, yellow for core strength and purple for lower body strength. Depending on the enemy's color, different moves may be more effective.

This mechanic adds a surprising amount of depth to "Ring Fit Adventure." I found myself continuing to unlock new mechanics or twists to the gameplay pretty deep into the game. Fortunately, the advanced mechanics are not all dumped on the player right away, and the tutorials and hint systems are robust.

Hence, it feels like this game would be a perfect fit for someone new to gaming. Learning the basics of RPG video game mechanics, inventory and item management, and even looking for secrets throughout the levels serve as an excellent introductory lesson in the design of video games.

But, how does it hold up as an exercise tool? It's one thing to design a fitness game that is more fun than running or going to the gym; it's another entirely if it's capable of promoting a consistent fitness regime.

I used "Ring Fit Adventure" for a little over 40 days. I played once a day, almost every day, anywhere between 15 and 45 minutes. The game tracks how many calories you are theoretically burning, and even tracks your pulse after each level. It makes sure you feel comfortable doing the exercises and is constantly reminding you to not exert yourself too hard. The game focuses on short bursts or exercise, and always makes sure you stretch before and after your workouts, and frequently reminds players to drink water. The mindfulness-centric reminders — simple things like telling me to breathe — are among the game's aspects that I found extremely helpful. I feel happier, more alert and overall better since I've been using Ring Fit. It helps keep me going. Having gotten tired of the monotonous feeling of home exercise, "Ring Fit Adventure" was a perfect distraction for keeping me in a routine.

But on a grander scale, "Ring Fit Adventure" is just one piece in a bigger 21st century trend. With the hugely popular FitBit craze and Pokémon Go's massive success of indirectly encouraging physical activity, gamification of fitness is starting to enter the mainstream. "Ring Fit Adventure" is another entry in comparable reward-based fitness routines.

Certainly, gamifying fitness can be helpful in promoting a healthier lifestyle with positive reinforcements. And yet, one great detriment of exergaming is that it turns our exercise routines and intimate health information into data points for some of the most powerful corporations on the planet. In late 2019, wearable fitness tracker company FitBit was bought out by Google for $2.1 billion. FitBit possess the fitness data for nearly 30 million user; the transaction raises the question of how we know our privacy is guaranteed as said data changes hands between companies. The data from our fitness routines can be invaluable to healthcare and insurance companies, or middlemen who can sell said data to insurance companies.

This concern is tangible enough to give me pause as I gamify my fitness routine. There are times that I boot up my Switch and velcro the leg strap to my thigh, then think: maybe I'd be better off taking a run outside instead.