From a dystopian prison movie to a limited series starring Oscar winner Octavia Spencer, March has much to offer 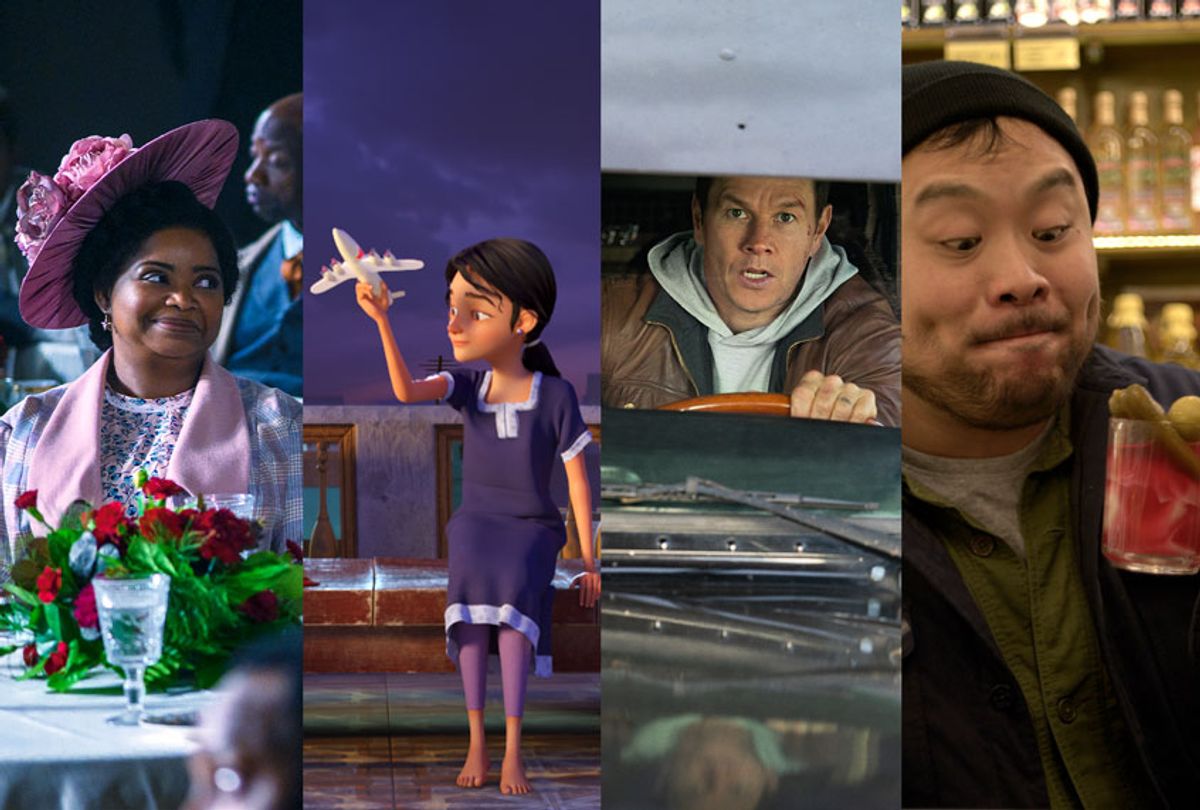 Self Made: Inspired by the Life of Madam C.J. Walker, Sitara: Let Girls Dream, Spencer Confidential, and Ugly Delicious (Netflix)
--

Netflix's March releases list is a rich split between classic films, like "Goodfellas" and "The Shawshank Redemption," and unique new content. The documentary and docuseries lineup looks particularly strong, with the bizarre "Tiger King" and the heartening history detailed in "Self Made: Inspired by the Life of Madam C.J. Walker."

Two fictional films that have my attention are "The Platform," a bleak dystopian flick, and the more upbeat family drama "Uncorked."

Below, check out highlights from the month, followed by the full list.

Loosely based on the "Wonderland" novels by Ace Atkins, "Spenser Confidential" follows Detective Spenser (Mark Wahlberg), an ex-cop and ex-con, who teams up with aspiring fighter Hawk (Winston Duke) to uncover a sinister conspiracy tied to the deaths of two Boston police officers.

James Beard Award-winning chef David Chang and Academy Award-winner Morgan Neville return with "Ugly Delicious" for a second season. Like the first, Chang will travel the world with writers, chefs, activists, and artists who are using food as a way to talk about the the experiences that divide and bind us. Guests this season include Nick Kroll, Aziz Ansari, Padma Lakshmi, food writers Helen Rosner and Chris Ying, Danny McBride, Bill Simmons, and Dave Choe.

Set in 1970s Pakistan, "Sitara: Let Girls Dream" is a short, silent film about Pari, a 14-year-old girl who dreams of becoming a pilot. She spends her days studying Amelia Earhart and making paper airplanes, unaware that her father plans to marry her off to a much older man.

Alerta! Netflix's latest hit reality competition show – that doesn't involve letting a dog drink wine – is back, but not for a second season. Instead, the Brazilian version of "The Circle" has come to American streaming shores, for all the social media voyeurism your heart desires.

In the series, strangers are placed in separate apartments, and their only way to speak to each other is through texting on a voice-activated social media platform on their TVs. They share photos, chat with each other, and play ridiculous games, all in the hopes to be rated highly by each other. The two most popular people become influencers and block one person, who is evicted forthwith and then immediately replaced. Can't wait to read the subtitles along with all the texting on screen.

Based on a true story, "Lost Girls" follows a mother desperate to find her missing daughter. In her investigation, she uncovers a string of unsolved murders. The film stars Amy Ryan, Gabriel Byrne, and Thomasin McKenzie.

Netflix is going hard on the "Altered Carbon" content; the second season of the futuristic live-action series premiered on Feb. 27 (though, as Salon's Melanie McFarland wrote, it wasn't exactly a home run). But one of the benefits of the franchise is that it takes place in a society where human identity is no longer bound to a physical form, but is instead tied to a downloadable consciousness. The lead character, Takeshi Kovacs, can and does change faces with each new reimagining of the story.

In this anime adaptation by Dai Sato, the creative mind behind "Cowboy Bebop," Takeshi must protect a tattooist while investigating the death of a yakuza boss alongside a no-nonsense military operator.

In this Netflix original series, Canadian comedian and actress Mae Martin stars as herself. She's a stand-up comic living and working in London, while navigating new relationships and sobriety.

For fans of sweeping fantasy series like "The Witcher," "The Letter for the King" is a family-friendly Netflix Original that follows a young knight in training who is given a seemingly simple task: deliver a message to the King. But the path towards delivering this secret letter is riddled with ancient prophecies, magical powers and fickle companions.

"If everyone ate only what they needed, the food would reach the lowest level." This is the guiding principle of "The Platform," a Spanish-language dystopian film centered on a multi-level prison where inmates on high floors eat better than those below, who get the leftover scraps (it feels a little bit like a darker version of the 2015 Tom Hiddleston film, "High-Rise").

But then, an inmate rebels and tries to figure out a way for equality to prevail — but not everyone is on board.

"Self Made: Inspired by the Life of Madam C.J. Walker," March 20

This irreverent limited series that boasts LeBron James and Kasi Lemmons among its executive producers will explore the life of Madame C.J. Walker (played by Octavia Spencer), who built a hair care empire that placed her as the wealthiest African-American businesswoman and wealthiest self-made woman in America until her death in 1919. Blair Underwood, Tiffany Haddish, and Carmen Ejogo also star.

This Netflix documentary, which is executive produced by Barack and Michelle Obama, takes viewers into the world of Camp Jened. The ramshackle Catskills camp, located down the road from Woodstock, was a revolution in its own right; during a time when teenagers with disabilities lived lives characterized by isolation and institutionalization, this "camp for the handicapped" allowed its campers to experience a typical summer camp experience — from group sports to covert make-out sessions.

"Crip Camp" is directed by filmmaker Nicole Newnham and film mixer/former camper, Jim Lebrecht; it debuts in celebration of the 30th anniversay of the Americans with Disabilities Act.

Set against the backdrop of WWII, "Curtiz" is the dramatized story of Hungarian film director Michael Curtiz as he grapples with studio politics and a dysfunctional relationship with his estranged daughter during the troubled production of "Casablanca" in 1942.

Directed by "Deutschland 83" and "Deutschland 86" star Maria Schrader, "Unorthodox" is a new Yiddish- and English-language German drama series. According to Variety, the series "tells the story of a young ultra-Orthodox Jewish woman in New York (Shira Haas) who flees her arranged marriage and religious community to start a new life in Berlin."

In the third season of "Ozark," we pick up with the Byrde family, led by Marty (Jason Bateman) and Wendy (Laura Linney), who has relocated from Chicago to a summer resort community in the Ozarks. With only Ruth Langmore (Julia Garner) as their deputy, they try to balance their family's interests with their partnership with a crime syndicate. Last season ended with Wendy refusing to escape to the Gold Coast, believing that the Ozarks is the safer option.

In the drama written and directed by Prentice Penny ("Insecure"), Elijah is a young man from Memphis who has enrolled in classes to become a master sommelier, much to the disappointment of his father, Louis, who assumed he would take over the family barbeque joint that has been passed from father to son since its inception. While Louis struggles with feelings of rejection, his son wrestles with the demands of his courses — will they ever learn to slow down and listen to each other?

Here is a full list of what to expect on Netflix in March:

"Carmen Sandiego: To Steal or Not to Steal"
"Marc Maron: End Times Fun"

"Lu Over the Wall"

"Self Made: Inspired by the Life of Madam C.J. Walker"
"A Life of Speed: The Juan Manuel Fangio Story"
"Archibald's Next Big Thing" Season 2
"Buddi"
"Greenhouse Academy" Season 4
"Maska"
"The Platform"
"Dino Girl Gauko" Season 2
"Tiger King: Murder, Mayhem and Madness"
"The Letter for the King"
"The English Game"

"Crip Camp: A Disability Revolution"
"The Occupant"
"Curtiz"
"YooHoo to the Rescue: Season 3"