Sassenachs, this "Outlander" ice cream is worth your time . . . and a few hours of effort

Sing me a song of an ice cream that was gone in 20 minutes . . . Say, could this lass make it herself? She did! 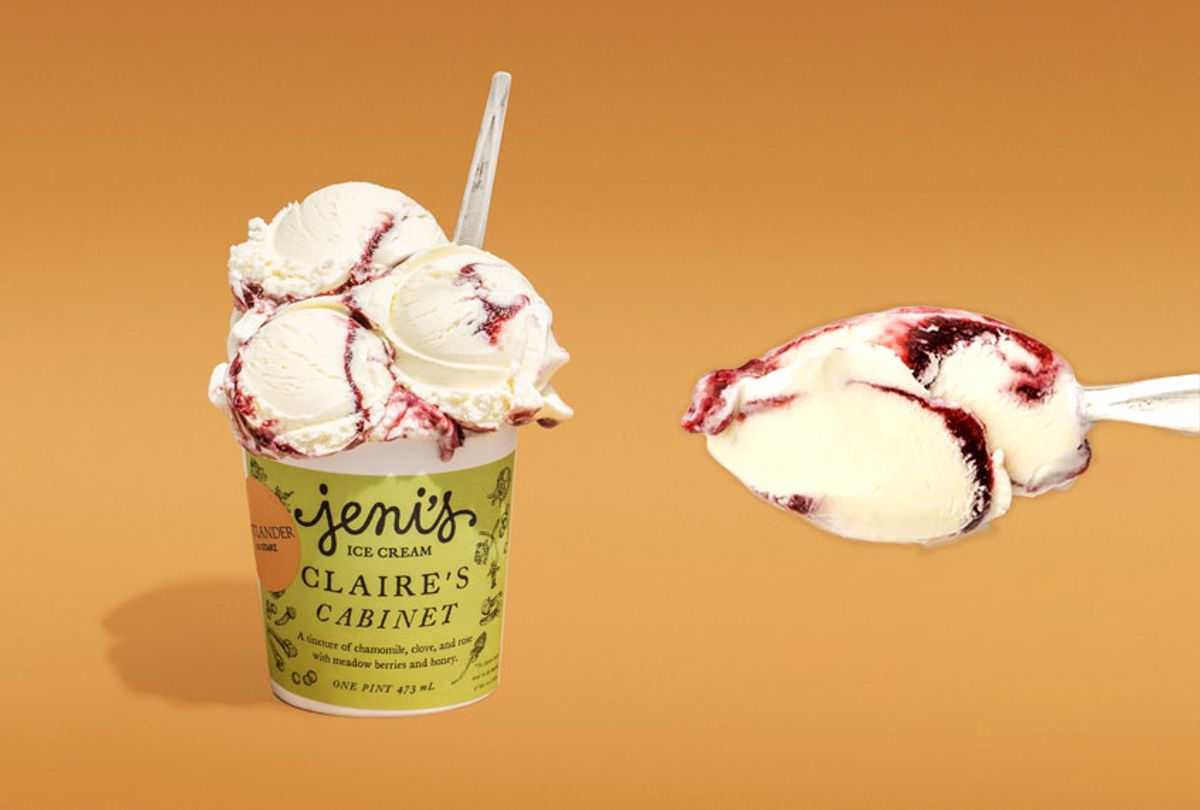 Similar in intensity to the love shared by 18th century Scotsman Jamie Fraser (Sam Heughan) and his 20th century lady love Claire (Caitriona Balfe), an "Outlander" fan's passion transcends all. Neither time nor distance can hold them back from their greatest desires, even if the sought-after object in question is in danger of melting if it isn't refrigerated immediately.

But there is a difference between obsession and devotion, and part of what delineates that difference is the amount of labor a person is willing to undertake on behalf of the thing they love. Ohio-based company Jeni's Splendid Ice Creams inadvertently created such a challenge when the company agreed to share the recipe for its "Outlander"-inspired ice cream, Claire's Cabinet, with the agreement that I would make it and write about the experience.

An explainer seems appropriate here. Jeni's founder Jeni Britton Bauer is an "Outlander" superfan, moving Jeni's to develop Claire's Cabinet as a token of her devotion, and because Starz invited her to do so in conjunction with the drama's fifth season premiere on Feb. 16.

Jeni's is a cult favorite among artisanal ice cream devourers, with just over 40 locations in 14 cities. My city is not among them, although a few flavors are available by the pint in select grocery stores.

But Claire's Cabinet, inspired by the possible contents of the good Doctor Fraser's 18th century herbal stores – and according to the Jeni's blog, "the sights, smells, and sounds of the early American landscape, specifically the edge between misty mountain forest and sunny meadow" – is not in your grocer's freezer aisle.

That means unless you were among the lucky fans able to snap up one of the 700 pints sold online, all of which were gone within 20 minutes of its release on Feb. 10, you may never know what that Sassenach's delight tastes like. Presumably the fewer than 100 servings doled out to each of its scoop shops sold out as swiftly.

Knowing what I know about "Outlander" stans, whether by way of Diana Gabaldon's novels or the series, the flavor's lightning-quick vanishing tracks. Frankly Bauer could have proposed a flavor inspired by Jamie Fraser's bathwater, and the faithful would've have jumped on it just as quickly. The folks at Jeni's know this to be true. "Of course, we could have made a whisky flavor and been done with it," it says on its blog. (That could still happen. On March 2 Heughan introduces his whisky to the U.S. market. It is called, surprise surprise, The Sassenach. )

Bauer, a James Beard award winner who authored several acclaimed recipe books, believes in sharing the joy of dessert creation. And I, the owner of an ice cream maker who hasn't made a homemade batch several in years, was curious to see whether an amateur's from-scratch version of Claire's Cabinet would be up to the challenge of making gentle, considerate, candlelit love to my taste buds.

Part of my fascination has to do with the flavor combination, described on the pint as "a tincture of chamomile, clove, and rose with meadow berries and honey." Floral ice creams are common, but typically that refers to rose or lavender. Chamomile, though common for a tea, is still an unusual choice.

Here's where that test of devotion kicks in. Picking up a pint to enjoy while watching your favorite show is easy. Making ice cream requires blocking time out on your calendar. Regardless of the recipe's level of difficulty – and this one is fairly simple – it takes a couple of hours' production time and a minimum of four hours in the coldest part of one's freezer before your dessert is ready. (Mine fully ripened overnight in the freezer.)

First there's the matter of obtaining the ingredients. The fruit for the jam can be found in the frozen section of many grocery stores; I used a mixture of raspberries, blueberries, and blackberries from Trader Joe's.

Those lucky enough to live in an area with upscale food stores or culinary boutiques with bulk spice sections can score chamomile flowers without much fuss. Otherwise you'll have to order them from a reputable outlet.  Be sure to get culinary-grade rosebuds while you're at it, since those can be tougher to come across, and you may need to make rose water.

Culinary rose water is available for sale in those fancy groceries I mentioned before. You may even have rose essential oil in your own cabinet because you are a fancy person. Good for you. But true rose essential oil is expensive, while making rose water is not and no more challenging than steeping an herbal infusion. Plus, you can save whatever is left over for a variety of uses.

Reading all of this probably makes you wonder whether the final product is worth the effort, and the answer is a resounding yes. Even the experience of making Claire's Cabinet is profoundly sensual: boiling the honeyed milk and cream mixture with an extreme gentleness that is in no way tentative yielded a lovely, golden hue that was a promise of power known and held in leash; a challenge and a provocation the more remarkable for its lack of demand.

Thus enticed I did as demanded. My own soulmate in that moment was too hungry and too clumsy for tenderness, and earlier that day had bitched mightily about how long this whole business was taking. Yet even he was beckoned to the kitchen by its olfactory seduction. I stepped back, allowing him to lean over the sauce pot and inhale the alluring fragrance of the bathing flowers.

"You're mine, mo duinne," he said softly as he . . . OK, that didn't happen. But in that moment he did come to understand the joy of the process. Our kitchen smelled incredible, and the sight of the colorful berry and sugar combo perkily bubbling in a nearby pan lent cheer to an otherwise dreary midwinter weekend.

Pressing the chamomile buds and cream through a cheesecloth intensifies the scent and flavoring, which, as the Jeni's description promises, evokes notes of butter and fragrant apples. After completely cooling down the hot cream and the jam in an ice bath, the mixture froze beautifully in our little machine. I even over-churned it a touch by mistake and the final product still turned out fine. (Avoid doing this by keeping your churn under 30 minutes, or just until the freezing cream begins to resemble soft serve.)

Was the taste of Claire's Cabinet akin to Claire and Jamie's love – which is to say, worth the patience and work? Indeed it is. The butterfat's richness embraces the honeyed chamomile to produce a flavor that's unusual and familiar at the same time, and the berry ribbon tempers its delicate sweetness with a burst of tartness that's, dare I say it, arousing.

My husband, who knows nothing about "Outlander," likened the flavor to a homemade shortbread sandwich cookie with jam filling. He even suggested that we make it to serve as the finale the next time we have friends over for dinner.

You, dear reader, can make your own plans for creating and enjoying Claire's Cabinet, but be aware that consuming it will take more than one sitting. Like the love of every "Outlander" addict's dream man, the recipe's yield is generous.

New episodes of "Outlander" air Sundays at 8 p.m. on Starz, and the first three seasons are currently streaming on Netflix. If you want your ice cream to be ready for Sunday evening, make it on Saturday.

"Chamomile is a beautiful ingredient, especially when steeped in warm cream, versus water. Rich notes of butter and fragrant apples come through because those scent elements of the flower adhere to the fat in the cream. Look for high-quality dried, bright yellow flowers. A tiny amount of a good quality rose brings a spiced honey note. And clove is one of those old spices (also a flower) that blooms heavenly into the cream. Honey, that beautiful product of meadow flowers, actually makes this flavor slightly nougat-y."

"The jam of forest berries is an old recipe of mine — looser than a true jam, I usually just boil for a solid eight minutes. Or until I can dip a frozen spoon into it and draw a line through the solidified jam. It works for ice cream every time. Leftovers also work for scones or a hot buttered baguette."

Mix about 2 tablespoons of the milk with the cornstarch in a small bowl to make a smooth slurry.

Whisk the cream cheese and salt in a medium bowl until smooth. Fill a large bowl with ice and water.

Combine the remaining milk, the cream, sugar, corn syrup, and honey in a 4-quart saucepan, bring to a rolling boil over medium-high heat, and boil for 4 minutes. Remove from the heat, add the chamomile flowers, and let steep for 10 minutes.

Strain the milk mixture through a sieve lined with a layer of cheesecloth, pressing on the chamomile flowers to extract as much cream as possible. Return to the saucepan and gradually whisk in the cornstarch slurry. Bring back to a boil over medium-high heat and cook, stirring with a heatproof spatula, until slightly thickened, about 1 minute. Remove from the heat.

Gradually whisk the hot milk mixture into the cream cheese until smooth.

Pour the mixture into a 1-gallon Ziploc freezer bag and submerge the sealed bag in the ice bath. Let stand, adding more ice as necessary, until cold, about 30 minutes.

Pack the ice cream into a storage container, alternating it with layers of the berry sauce and ending with a spoonful of the sauce; do not mix. Press a sheet of parchment directly against the surface, and seal with an airtight lid. Freeze in the coldest part of your freezer until firm, at least 4 hours.

Combine the berries and sugar in a small saucepan and bring to a boil over medium-high heat. Continue boiling, stirring occasionally, until it reaches 220F (5 to 8 minutes). Let cool slightly, then force through a sieve to remove the seeds. (Or leave a few seeds in there just to prove you made it.) Refrigerate until cold before using.