What should Trump do about coronavirus? Elizabeth Warren has a plan for that

If campaign coverage focused on actual ideas, Warren would get lots of attention for trying to save people's lives 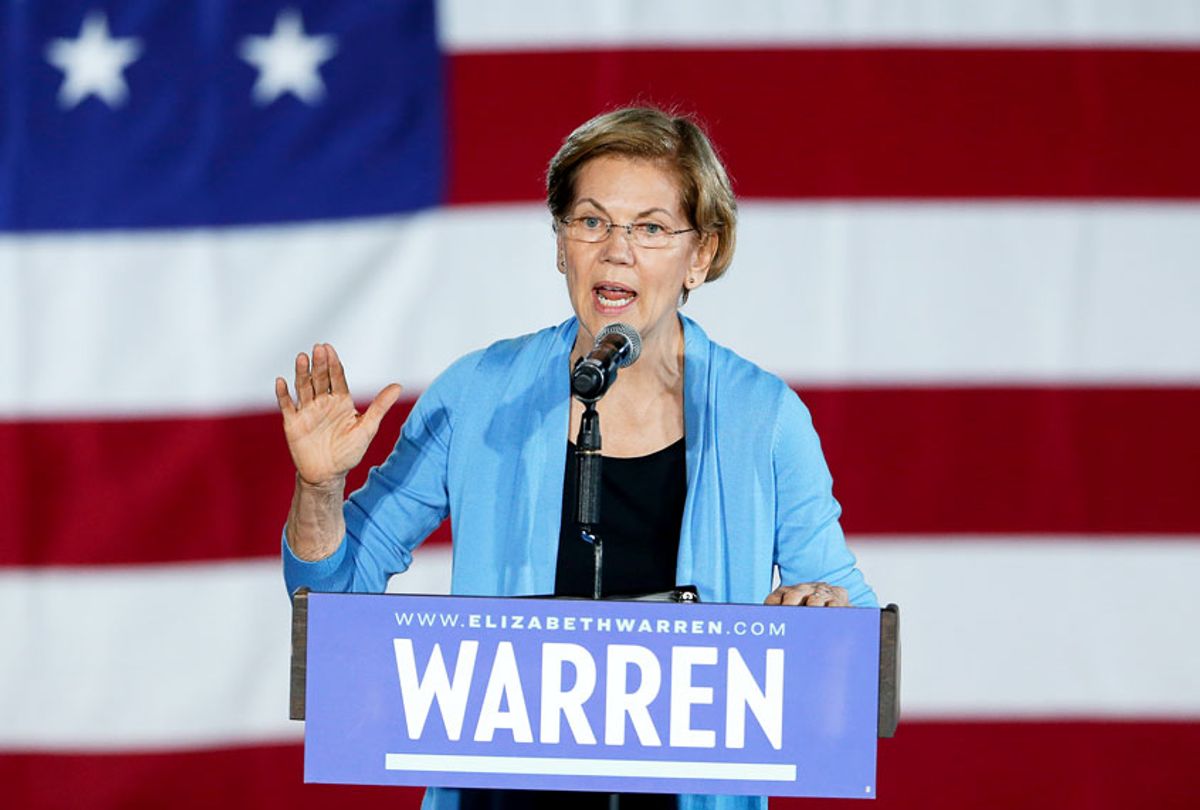 Someone is out there talking about what Donald Trump should really be doing about coronavirus, rather than just delivering incoherent reassurances.

But it's Elizabeth Warren, who, because she has been canceled by the political-campaign handicappers, can no longer get major-media attention to save her life — or others'.

In an alternate universe where campaign coverage focused on ideas and where White House coverage focused on what the president is doing — rather than a cleaned-up version of what he is saying — we would all be talking and writing a lot about how the government should be responding to this crisis.

And in the absence of any of the other Democratic presidential candidates putting forth anything remotely like a plan, we'd be discussing the merits of Warren's, as outlined in a speech she gave in Houston on Saturday. Here were her major points:

Over at HuffPost, Jonathan Cohn reports that Warren has even more specifics about her public health moves in a detailed plan she released on Monday, to supplement an earlier plan for combating infectious disease outbreaks in general:

She wants Congress to make coronavirus testing and treatment free by requiring that private insurers cover it with no out-of-pocket costs, having public insurance programs such as Medicare and Medicaid do the same, and then creating a new uncompensated care fund that would finance tests and treatments for people who have no insurance.

Warren also wants the federal government to provide emergency funding to safety net providers, such as community clinics, as well to state public health departments. This money could mean hiring additional health care workers or setting up new, temporary facilities — perhaps including mobile or drive-through units so that people could get tests and treatments without infecting others.

As for a vaccine, Warren would like the government to guarantee bulk purchases in order to encourage mass production, and then to make sure vaccines are available at no charge.

I've been seriously disappointed at the lack of intelligent, informed assessments of the Trump administration's response to the crisis so far, both in terms of its effectiveness and whether it's been accurately characterized by Trump and his flatterers.

Similarly, I haven't seen regular, quality discussion in the media about what the government's response should be, going forward.

Writing for the Columbia Journalism Review, Jon Allsop made an excellent case Monday morning that asking the Democratic presidential candidates how they'd respond to coronavirus would inform the current discussion — and tell us a lot about how they'd govern.

But instead, it's all horse-race coverage all the time. "We treat it as a narrow question of who's up and who's down; of what issue X means for the standing of candidate Y, more than what candidate Y might do about issue X," Allsop wrote.

And while Warren is the only candidate who has addressed the virus crisis in a constructive way, what the other candidates are saying is still worth noting.

On CNN on Friday, for instance, Joe Biden was (appropriately) harsh:

No one takes the president's word for these things. At a minimum, he exaggerates everything, and the idea that he's going to stand there and say everything is fine, don't worry, who's going to believe that?….

I think what you're seeing is — and, look, even talk to your colleagues, talk to anybody who knows anything about this, the concern is, do they have any idea what they're doing? Is this all being run as a political gambit and "How this is going to affect my election?" That's not the focus. It's not about the president, it's about the people. It's about the country.

And responding to ABC's George Stephanopoulos on Sunday, Biden called attention to the White House's gag rule affecting anyone who actually knows what's going on, among other significant failures:

Look, right now you have this president, hasn't allowed his scientists to speak, number one. He has the vice president speaking, not the scientists who know what they're talking about, like [Anthony] Fauci.

Number two, they haven't even prepared a test kit to determine whether or not anybody has the virus. They're not even available. They say now they'll be available by the end of the week or next week. They haven't set up a pattern in how to proceed.

They have eliminated the office we set up in the president's office to deal with pandemic diseases. This has been outrageous, the way they proceeded. They should let the scientists speak.

I've been talking about this for a while, they haven't — they don't even have a test kit. A test kit to determine whether or not someone has the disease.

Look, this is about knowing where it is, who has it, and how to deal with it. And I see — I see no preparedness other than political talking points, putting someone in charge who is not a scientist — and muzzling the scientist.

Mike Bloomberg spent untold millions of dollars broadcasting a three-minute ad all about the coronavirus crisis on various TV networks during prime time Sunday night. Although it was all generalizations, they were good ones:

At times like this, it is the job of the president to reassure the public that he or she is taking all the necessary steps to protect the health and well-being of every citizen.

The public wants to know their leader is trained, informed and respected. When a problem arises, they want someone in charge who can marshal facts and expertise to confront the problem.

They want him or her to prepare for events like these in advance with teams of experts.

Communications must be honest and transparent, so people can be confident that professionals are in charge. Trust is essential.

Government's resources must be focused and priorities clear and consistent.

In a press release, Bloomberg also announced that, as president, he would invite back scientists forced out of the federal government by the Trump administration.

In her Houston speech, Warren used the coronavirus crisis as a jumping-off point for a blistering attack on her Democratic rivals: Bloomberg, she said, would "govern to protect himself and his rich friends over everyone else"; Biden "is so eager to cut deals with Mitch McConnell and the Republicans that he'll trade good ideas for bad ones"; Sanders "consistently calls for things that fail to get done and consistently oppos[es] things that nevertheless he fails to stop."

That got a lot of press.

But the closest the Washington Post got to seriously addressing Warren's proposals was an article by Annie Linskey that was mostly about the strategic value of coronavirus messaging.

Warren and Bloomberg have both "seized on the virus to draw a sharp contrast with President Trump, excoriating the administration's response to the epidemic and highlighting what they would do differently," Linskey wrote, only briefly mentioning the actual substance of Warren's plans.

In the New York Times, Jim Tankersley and Thomas Kaplan wrote an article all about coronavirus and the campaign — but focused exclusively on how "the growing threat it poses to America's record-long economic expansion" is giving Democrats an opening "to attack the president on what has been his greatest strength with voters: the economy."

In that context, the authors briefly summarized Warren's economic proposals.

Other stories about coronavirus and the campaign have focused on how it might affect rallies and other events.

Trump, meanwhile, gets the big headlines every time he says anything about the virus, no matter how nonsensical.

Here is some of what he had to say Monday morning, before a meeting with the Colombian president:

We are working very hard with the CDC, with everybody on a subject that has become a very big subject. Our country is doing very well, our professionals are doing really an incredible job.

In fact, two dozen new cases were reported in the U.S. over the weekend, including the first two deaths.

It was just more rambling from a profoundly uninformed man who clearly has no idea what's going on — not to mention what to do next.

The media, not him, should set the agenda going forward.