Ain't no party like an MSNBC party, even on this weirdly sober Super Tuesday 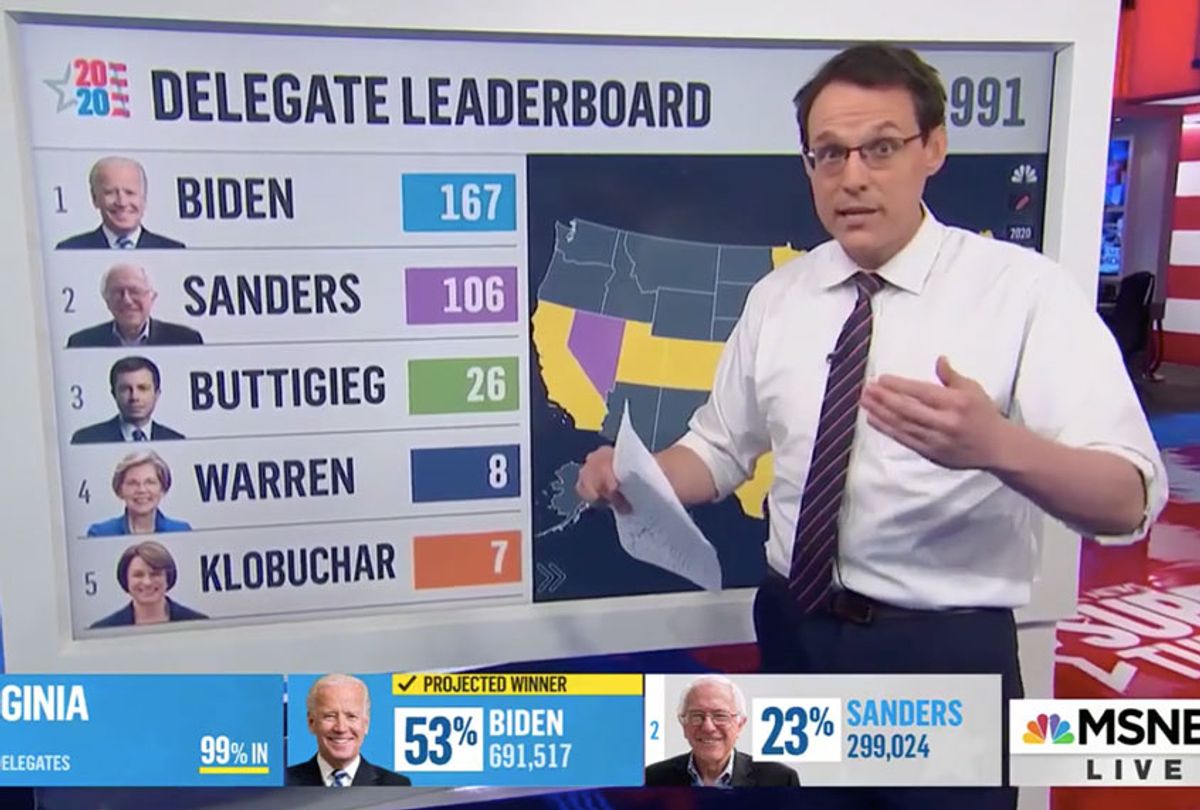 At 6:52 p.m. Pacific Time MSNBC anchor Brian Williams declared, "We haven't had a party 'til now. It's now a party."

To which the unfortunate soul who had been watching MSNBC since Super Tuesday morning — it me — could only answer, "Define what you mean, sir, by 'party.'"

From the perspective of a very tired observer at home, Williams' usage of the term associated with frivolity and celebration seemed to be pushing it a bit. He could not have been talking about unity among the Democrats, not as of the latest hours on Tuesday and early Wednesday.

The earliest numbers pointed to a split between Vermont Sen. Bernie Sanders and former Vice President Joe Biden, with the former presumed to be the frontrunner headed into this primary slugfest and the latter thought to be all but dead until a few days ago.

Based on what was happening onscreen, Williams was referring to the candidates' razor thin margin of votes in Texas, where Sanders led for a time until Biden overtook him; NBC finally called Biden as the projected winner close at to 2 a.m. Eastern. California was projected to go to Sanders.

Even special coverage co-anchor Rachel Maddow seemed uncharacteristically less-than-animated as Biden's shocking competitiveness drew out calls for projected winners in Massachusetts, which the former veep won in an upset over Sanders and Sen. Elizabeth Warren — quite the blow, considering Massachusetts is her home state. By around 10 p.m.m PT, or 1 a.m. ET for the news team, "The Rachel Maddow Show" host honestly looked like she'd rather be anywhere else.

We sympathize. Tough as it must be to facilitate hours upon hours of MSNBC primaries coverage, it's even more deflating to watch hour after hour knowing that the best-case scenario would have been ousted anchor Chris Matthews's or Chuck Todd's nightmare, otherwise known as Sanders clinching the nomination. Todd's part in MSNBC's coverage shrank as the day headed into prime-time which, given what happened to the host of "Hardball" a day ago and viewers' general disdain for the guy these days, is understandable.

On the other hand, that would have caused a little bit more spark in the form of apoplectic fits on the part of its contributors such as Rev. Al Sharpton or Democratic strategist James Carville, who took a moment for saluting South Carolina congressman and House Majority Whip Jim Clyburn as the guy who "literally saved the Democratic Party."

And while I wouldn't go as far as to accuse MSNBC of being in the bag for any single candidate prior to Tuesday night and early Wednesday morning, the general mood at witnessing Biden's strong showing on Tuesday could most accurately be characterized as "pleasant surprise." The only person who appeared to be partying was Steve Kornacki, multimedia anchor, data analyst and Lord of the Interactive Graphics Screen.

All election nights place Kornacki in his element, as he rolls up his sleeves and dashes about, circling districts and vigorously walking viewers through scenarios involving vote totals on the district level. With Matthews gone it fell to Kornacki to pump some life into the place with his increasingly animated assessments of "Too Close to Call" states, and why a rout they thought would favor a Democratic socialist went to an establishment-friendly moderate.

Candidate political analyst and "Deadline: White House" host Nicolle Wallace underscored the important of Biden's unexpected gains, reminded viewers he was "flat broke" and hasn't had a single ad on the air.

"The Democratic establishment had essentially turned their back on Joe Biden before Saturday night," Wallace offered. What changed? The suspended election campaigns of former Indiana Mayor Pete Buttigieg and Minnesota Sen. Amy Klobuchar and their subsequent endorsements helped a bit; Klobuchar's was seen as key to Biden's Minnesota primary victory.

There was also the long-talked about ability for Biden to attract support from the party's African America base. Carville specifically cited Clyburn's endorsement of Biden as crucial to his wins in South Carolina and other Southern states before turning to a bit of premature grave dancing. "I think we're going to see obviously Bloomberg and Warren are not long for this world … I'd like someone on the panel to weigh in on this. We might see Democrats starting to ask Sanders, 'let's don't drag this thing out any more than we have to.'"

Yes. Let's talk about that.

Political analysts far savvier than yours truly will have more strongly sourced breakdowns as to how something that the average person who's been paying attention would have guessed would happen did happen.

MSNBC host Joy Reid concisely summarized the prevailing theory by saying, "Think of Joe Biden as being like Coca Cola, right? So if I have Coca Cola, and you make a soda, I still have Coca Cola. It's very difficult to change that brand. Biden has a known brand, particularly to the voters who really handed it to him tonight, which is Black voters."

Much earlier in the day, however, the anchors cited "the invisible hand of Barack Obama" in providing Biden with a last-minute boost, as if Obama were Mr. Wizard or some DC Comics all-powerful being from Oa. This played off an NBC News article citing "people close to Obama" and other unnamed Democratic sources referencing the former president's "hidden hand" and alluding to the hidden machinations of the Democratic elite.

There may be something to that. But it's more likely that, as Reid says, the Biden Brand is more familiar to a larger swath of the population, leading primary voters to cast their votes for him as opposed to Sanders or Warren.

Among viewers searching for evidence of a Warren media blackout, MSNBC did little to assuage their concerns or debunk their complaints. They covered the night as a two-way race between Biden and Sanders, with Bloomberg pressing into the top three here and there. The numbers backed up this tale, save for with the Massachusetts results, which producers again skewed by showing only the two men in competition, leaving Maddow to hit the pause button and point out emphatically that Warren still had a strong showing in the exit polls, before asking why MSNBC was treating her as if she were not in contention.

That's also a fair question considering that earlier in its broadcast coverage the network cut to a Warren campaign top to hear her speech, only to cut away mid-run. The network carried Biden's and Sanders' speeches to supporters more or less in their entirety, and gave nearly the same amount of airtime to Bloomberg, even though he only managed to win American Samoa.

Some hands are hidden, others are in plain sight. These moments validate those critiques about large media companies favoring certain candidates over others, which played out before our eyes in 2016 with the free media granted to Trump, and is in full reboot here — only this time in favor of Obama's favorite tall cup of Joe. Neither Matthews nor Todd could have played at being unbiased about Sanders' success, and what Reid says about Warren's effect on Bloomberg — "Warren iced him. She ethered him. She finished him. But it was a murder-suicide" — accurately applies to Matthews' fortunes as well.

In the coming weeks as Democrats theoretically come together in support of a particular candidate, evaluating how much of a subtle force MSNBC's coverage will prove to be whether for one direction or pushing against another.

In any event, at least one development in this predictable party yielded a bon mot for the books, in the form of Williams' reference to the failed return on investment that is billionaire Bloomberg's $500 million spend on his self-funded run for president.

"It's fair to say he is not having the night he thought he paid for," Williams quipped. Cheers to that.