Should Bernie go negative on Biden? Absolutely not — that would backfire badly

As tempting as it might be, attacking a Democratic opponent is more likely to alienate voters than win them over 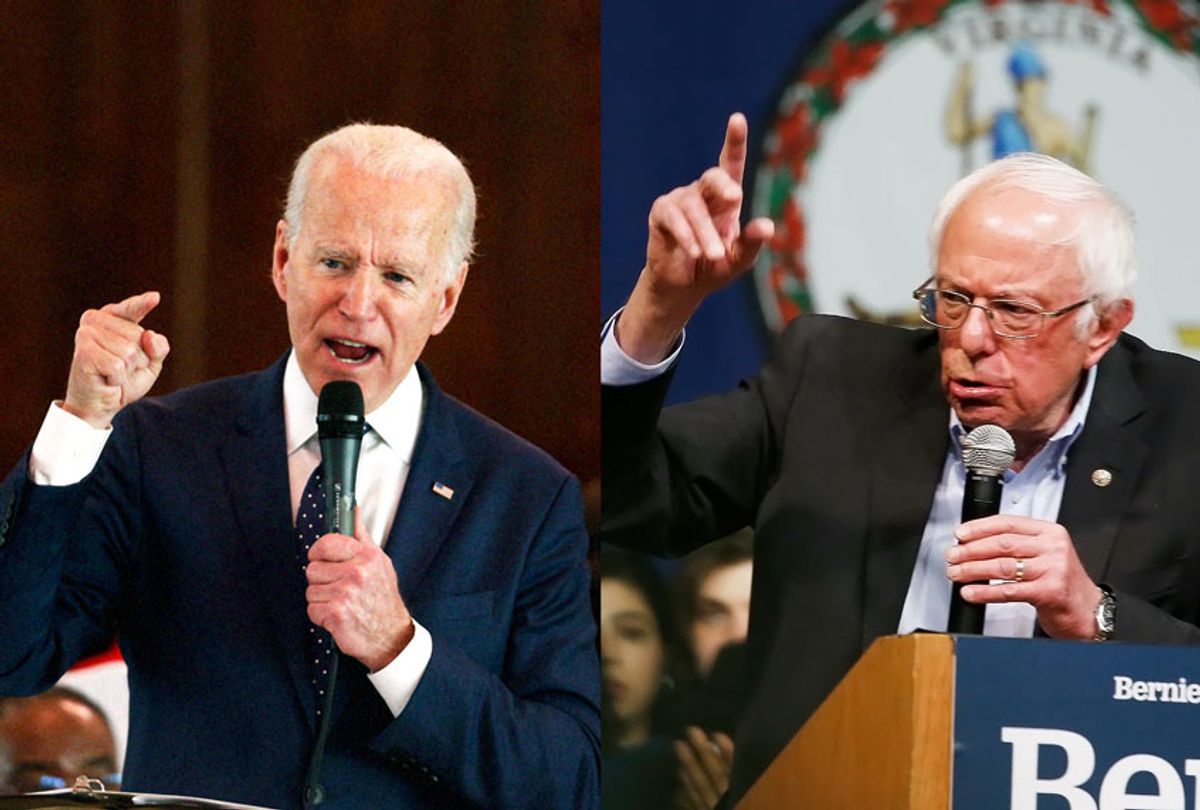 The stunning upset on Super Tuesday — where former Vice President Joe Biden won 10 states and ahead in the Democratic primary over Sen. Bernie Sanders, despite previous assumptions that Biden's campaign was all but dead — left Bernie World in a state of shock. Understandably so! It must be hard to understand why Democratic voters turned out in record numbers to back a rambling, often-truth-indifferent old man who has a laundry list of bad decisions in his past, from supporting the Iraq War to siding with the predatory banks that crashed our economy in 2007. Especially so in light of the fact that Sanders, while a year older than Biden, remains as sharp as ever and clear in his moral condemnation of just the kinds of injustice for which Biden has apologized his entire career.

No wonder Sanders fans are angry. And it's no wonder that there's some hunger to see Sanders himself manifest that anger by going hard negative against Biden, lashing out at the newly-anointed frontrunner and trying to scare people out of voting for him.

But that's exactly the wrong approach. Negativity is why Sanders seems to be hitting a ceiling of around 30 to 35% of the primary voters. If he has any hope of expanding his base and turning this race around, he needs to find a new well of positivity — as much as that may choke his most ardent supporters.

Many folks disagree, of course.

"The gloves must immediately come off when it comes to treating Joe Biden," Anis Shivani wrote for Common Dreams, in a piece reprinted here at Salon.

Shivani lays out the case against Biden, which is certainly quite damning: The Iraq War, bankruptcy bill, his shabby treatment of Anita Hill, his efforts to cut programs like Social Security. He concludes by saying that Sanders "should make Democratic voters ashamed to be aligned with [Biden]."

This kind of argument may feel satisfying to Sanders supporters in the wake of their unexpected defeats on Tuesday. But going this route, which Sanders is already testing out, wouldn't help him. On the contrary, it's likely to backfire wildly.

The outcome from Tuesday doesn't suggest that Democratic voters are in love with Biden and need to be disillusioned in order to come around to Sanders. On the contrary, it suggests that the majority of Democratic voters — including crucial demographics needed to win in November, such as black voters and suburban women —simply don't like Sanders or think he can't beat Trump, and were looking to consolidate around any candidate that could defeat Sanders in the primary.

The likeliest reason for all this antipathy? These voters see Sanders as a divisive, negative figure who is more interested in shouting at them than asking for their vote. Going even more negative is just likely to make these voters even more annoyed, and push them even more firmly toward Biden.

If you doubt this, look at the first negative ads the Biden camp is running against Sanders: The rap on Sanders offered is that he's too, well, negative.

Biden's plan is to frame "Sanders as a divisive party outsider who won't accept defeat" and point to "his bitter Democratic primary fight four years ago with his party nemesis, Hillary Clinton," which they argue contributed to Donald Trump's election.

Biden isn't doing this on a whim. His campaign almost certainly has good, research-driven reasons to believe that the biggest concern voters have about Sanders is that he's too negative. Sanders would be foolish to play into Biden's hands by feeding fuel into that fire.

To be certain, Biden is also running a huge risk by leaning too heavily on this argument. Just as Sanders needs to convince Biden-curious voters to vote for him instead, Biden needs to avoid offending people who voted for Sanders in 2016 by blaming them for Trump.

Shaming people can be useful in some political contexts, but it's a particularly poor tool for winning over voters. As nice as it would be if people took criticism well, mostly they just get really defensive and become more inclined, not less, to reject the person they perceive as shaming them.

Look at what happened between Sen. Elizabeth Warren of Massachusetts and Sanders in a debate last year, when Sanders was asked about reports that he had told Warren privately he didn't think a woman could win the election. Sanders denied he said it, but Warren affirmed that he had. I believe Warren, for what it's worth, but what's more important is the evidence shows that this conflict hurt both candidates. Warren's support with men, who probably felt shamed about the times they'd said similarly rude things to women, went down significantly. But Sanders also saw a significant gender gap opening up, with women voting for his competitors by a margin of 7 points more than men — more than that in some states. Shivani criticizes Sanders for not going more negative on Warren. But when he did, he lost female voters — and women are more reliable voters than men.

None of which is to say there is no place for negative campaigning. Having surrogates who are leaders in specific communities who can discredit your opponent to those voters can be useful. Rep. Cedric Richmond, D-La., the co-chair of Biden's campaign, has publicly accused Sanders of saying "that African Americans in the South were considered part of the establishment."

That kind of criticism of an opponent, tailored specifically to voters who were already inclined to vote for your candidate, can help. But it's not useful when reaching out to skeptical voters. Richmond would probably get an "Are you saying I'm racist?" reaction from Sanders supporters if he tried to win them over with that argument.

On a personal note, my antipathy to Biden as a candidate has led me to have a number of conversations, in real life and online, trying to discourage those "normie" Democrats who are voting for him or considering doing so. When I trot out that laundry list of concerns, from the Iraq War to the bankruptcy bill, they invariably agree that is all true, but then say, "But I would vote for a potted plant over Trump."

I get the same response, over and over, to my repeated warnings that Biden's anti-progressive impulses will create opportunities for Trump to drive down turnout by attacking Biden from the left. I know in my bones I'm right about this, and expect to be proven right by November. But it's often like talking to a brick wall, especially to folks who aren't political junkies. They just return to the "he's not as bad as Trump" argument, not understanding that the situation is more complex than that.

I've come to believe that the grim reality is that a lot of Democratic voters are scared. So when they hear these criticisms of Biden's rightward views, some of them way out of step with the contemporary Democratic base, they hear an argument that he might appeal to more conservative voters in heartland states they believe must be won over in order to beat Trump.

This is likely especially true of the majority of black voters, who, as Elie Mystal at The Nation pointed out, "have determined that most white people are selfish and cannot be trusted to do the right thing."

Hammering Biden as too conservative, perversely, might help his electability argument. That's my experience with suburban white voters and it also seems to be an argument that is pushing black voters towards Biden. That might be a trap Sanders has to avoid. Instead, his efforts should be focused on reaching out to those voters on their terms, and trying to make the most positive argument that he can beat Trump.

Ultimately, the important thing to understand is Democratic primary voters are experiencing Donald Trump's presidency as an emergency. Even more so than in normal times, they're going to be angry at candidates who seem more focused on attacking a Democratic opponent than attacking Trump. Like it or not, that's a particularly serious problem for Sanders, whose liberal use of the phrase "Democratic establishment" already causes many voters to wonder if he thinks ordinary Democrats — both politicians and voters — are somehow more of an enemy than Trump. If that's what people conclude about Sanders, there will be no winning them over.