In the thrilling "Workforce," an exploited construction worker takes the ultimate revenge

Star Luis Alberti spoke to Salon about his latest film about privilege & class, showing at the Miami Film Festival 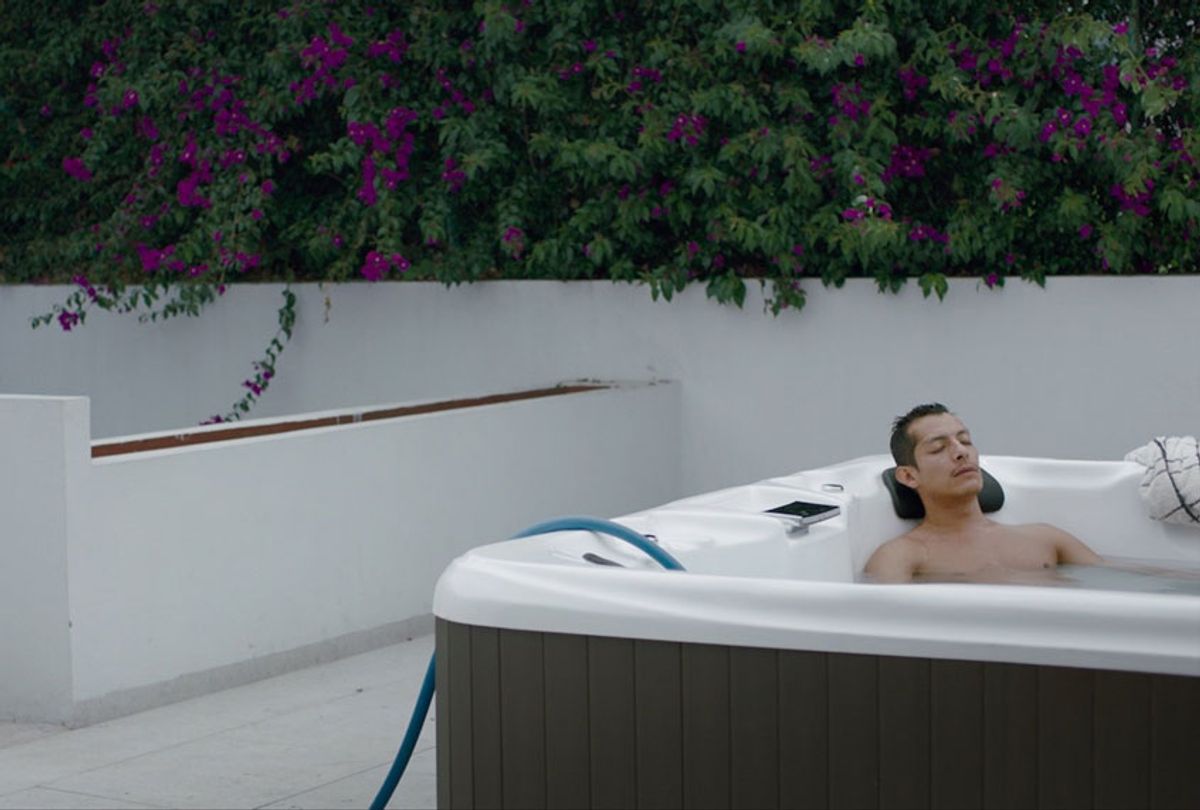 Francisco (Luis Alberti) is a construction worker whose brother dies while on a job for a wealthy homeowner. When Francisco tries to get compensation for his sister-in-law, he is met with disregard and indifference by the job boss and the homeowner — suggesting that the lives of these workers are disposable. Francisco soon takes matters into his own hands and sets a revenge plan in motion. He starts squatting in the empty house and eventually invites his co-workers to join him, creating a kind of commune. Of course, the situation comes to a head on several levels as power dynamics shift. How things play out creates the dramatic tension in this taut, absorbing film.

As Francisco, Alberti conveys his character's slow-burning rage well. His body language is freighted with despair, but he also shows off Francisco's moxie — living as well as he can for as long as he can. Scenes of him alone in the stylish house, enjoying a jacuzzi or shower, using an elliptical machine, or sleeping in a large bed, are contrasted with Francisco eking out a life of poverty in a tiny, decrepit, rain-soaked shack. Moreover, Francisco sees an opportunity to gain some control and he exerts power over the very colleagues he was once equal with on the jobsite. Alberti makes his transformation credible as Francisco behaves badly; that viewers are rooting for him to succeed is key to the film's knotty morality.

In a recent interview via WhatsApp, the actor spoke passionately about economic inequality and housing in Mexico, how power corrupts, and making "Workforce."

One thing that impresses me about your performance, as well as the performances by your co-stars, is the amount of physical work you do in the film as a construction worker —painting, moving furniture, etc. Can you talk about the role in that regard?

It was a way to get into the character. My colleagues in the film are real construction workers. They have many other jobs as well. I worked with some of them for a couple of days on a house under construction to learn what to do in my scenes. That helped me portray it realistically. So, moving the jacuzzi — the director wanted that to be "real" construction work, and it was.

The film addresses the exploitation of workers. What did you learn about the lives of these men and their daily existence?

That's the point of the film — that this [exploitation] happens all the time in Mexico and all over the world. My cousin had an accident on a construction site — the same as in the movie — and they said he was drunk. It was not true! They are breaking the labor laws and forcing us to accept things that are not OK at these jobs. David Zonana didn't want to make a political film. He was interested in the moral and social issues, and the personal things that happen as a result of these situations — this lack of justice in our society. That's the way it is. Talking to my [screen] colleagues, they said these accidents happen, how they don't get paid, etc.

The film concerns income inequality, showing the parallel houses where Francisco lives and where he works. What observations do you have about the rich and the poor and the middle class in Mexico?
That inequality is the way Mexico has always been. It's the same way all over the world. In Latin America, you have very poor people living beside very rich people and the contrast is ridiculous. The middle class almost doesn't exist in Mexico. There are people who think they are middle class, but it's a fantasy, an appearance. It's a complex topic. There are political and historical reasons, and economic reasons. We don't have a good education system because the government doesn't want to grow economically, or intellectually, or artistically. This is what the film is about.

You are very adept at playing both rich and poor characters and assume the roles of both in "Workforce." Can you talk about getting into those mindsets which are good and evil?

That's the dramatic arc of Francisco. The filmmakers wanted to portray how people can transform or change because of the context of what is happening to them — because of injustice and inequality, or because they want some dignity. We live our lives, and think we are good people, or we pretend to be these people. But we can change, and get corrupted, because of power. Suddenly, we can go from victims to bullies, and abuse someone else. It's about how you feel; the way you feel changes your attitude and the way you move and walk and behave and relate to other people.

The inequality and social contrasts make people unaware of other people's right and dignity. It is about how we can change our point of view, depending on where we are standing. What situation am I in? Am I the victim or the boss? I think that we are part of a society where we are submissive to the government and to other countries that are pushing us down. We repeat that behavior towards the people we don't think are equal to us, and it makes us angry with the powerful people — the politicians and the wealthy. Francisco is a normal guy who gets some power looking for justice, and he becomes a really bad guy. I won't spoil it. [Laughs.]

Francisco does some unspeakable things to get revenge and what he feels he deserves. Can you talk about tapping into his character's desperation?

Francisco's desperation is typical Mexican desperation. It's very common. I see these things happening all the time around me in Mexico. We all want to get some revenge, but that doesn't mean we need to become bad guys — but that's how politicians get! This social contrast is so strong, and that's why I think most Mexicans are desperate somehow. We live with injustice and inequality all day, everywhere. Even if you think you are in the middle class. We need respect for our rights and freedom and our nationality, and our country, and for our government. That's how I could play Francisco. I'm not trying to justify his bad behavior; there is no justification. That's the point! We need to understand we are all human beings who have rights and we need to avoid all this f**king injustice because that is very strong in Mexico. The working environment is very hard everywhere for everyone.

I think this about a construction worker — he is building a luxurious house which is not his. He doesn't own it, but somehow, he owns it because he builds it with his hands. That makes him feel some self-worth. He knows that he will never have a house like that, or have furniture like that, or a car. He gets angry when he is not being paid, and the owner doesn't care. It is psychologically damaging. These [workers] are trapped in this loop in society.

What can you say about housing issues and squatters' rights in Mexico? How prevalent is that in your society?

That happens a lot here in Mexico because of all the living issues. It's expensive to get a house, and it's getting more and more expensive. It's almost impossible for people to get a good house. If you are [employed], you can save money for your house, but not everyone can. So, you have builders who collude with the politicians, and there is a lot of corruption, and then you get s**t for your money. Most people get a little house and apartment. But it's for the middle class. Poor people live in other ways, and the rents are expensive.

Squatters are mostly criminals, or people who lost their house somehow, or are homeless, or don't have opportunities to have a good life or education. I don't know about the legal issues, but squatter rights —once you get into a house, it's almost impossible to get you out, as you see in the film.

The film is very quiet in places, conveying a sense of Francisco's loneliness and isolation. What can you say about the film's idea of how we all live in our own bubbles?

I think that is the aesthetic of the filmmakers, and the kind of film they were trying to make. It's very intimate. That was the goal — to get the viewer can get closer to the characters and think and have a kind of inner dialogue with them. We ask ourselves: What would I do to get justice? Would I be a good person if I had power? It's about principles and values and ethics and morals and being peasants in this society. That could be me. That's what I thought about to play this role. Maybe I could be that guy? We all could be that guy.