As its workers fight for better wages, AT&T announces another $4 billion in stock buybacks

The company's announcement this week comes amid of wave of buybacks since the "GOP tax scam." 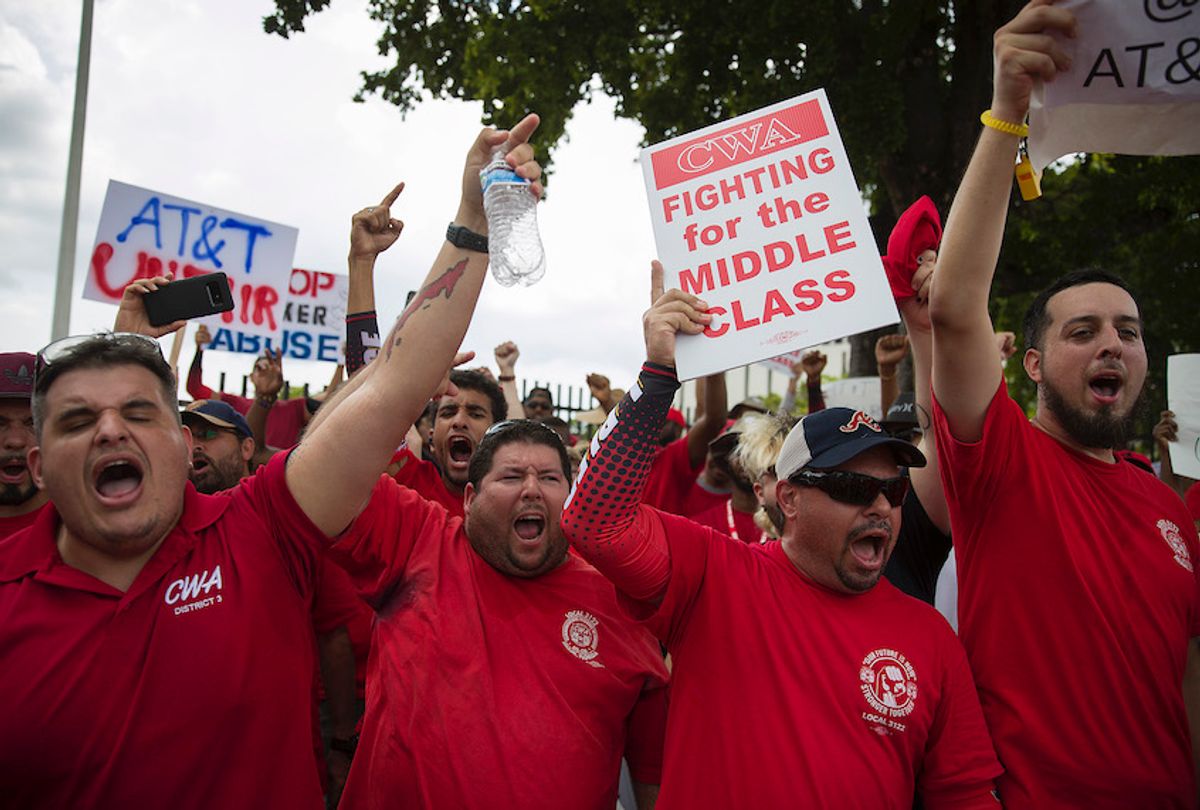 AT&T announces another $4B in stock buybacks

The union representing AT&T workers expressed outrage this week after the company announced it will buy back an additional $4 billion in stock from shareholders in the upcoming quarter.

The company's announcement, said Communications Workers of America (CWA) District 9 vice president Frank Arce, "is an affront to the thousands of workers going through contract negotiations because it shows the company's primary concern is pandering to wealthy hedge fund managers."

John Stankey, president and chief operating officer of AT&T, revealed on Tuesday the plan for the "additional accelerated share repurchase."

The buybacks, which "give a company's stock price a manipulative boost," fulfill the wishes of hedge fund Elliot Management, which owns a $3 billion stake in the company; piggyback on AT&T's $4 billion in buybacks in the current quarter; and come as the workers' bargaining team is trying to hammer out a better contract for the wireline technicians and customer service representatives in California and Nevada.

In an upate on the contract to begin next month for union workers, the bargaining team said Wednesday that the compnay had put forth a "retrogressive proposal" and wants "to eliminate some very important Memorandums of Agreement (MOA) and Letters of Agreement (LOA) that effect [sic] all of our members working conditions."

CWA and other critics of buybacks say they're an anti-worker maneuver.

In testimony before Congress last November, Center for Economic and Policy Research co-director Eileen Appelbaum called buybacks "a favorite hedge fund tactic for raising share prices" and said they "allow the hedge fund to cash in and sell its shares at a profit." Essentially, she explained, they "enrich hedge funds, but they force companies to cut back on investment, research and development, and job creation."

The Republicans' Tax Cut and Jobs Act (TCJA) of 2017, which critics dubbed the "GOP tax scam," was followed by record buybacks.

"The practice has come under scrutiny by members of Congress, who criticized companies for using their extra tax benefits to boost the value of their own shares instead of investing in outside growth or their workers," as the Associated Press reported last year.

"To remain competitive, AT&T needs to be building next-generation networks everywhere people need service, not jacking up the stock price through stock buybacks. Workers are ready to lead AT&T into the future, and the company needs to invest in our communities and us for that to happen," said CWA's Arce.

In its press statement Wednesday, CWA said that since the tax law went into effect in 2018, AT&T has slashed more than 37,000 jobs, defying company's pledge to create some 7,000 jobs.

John Wayne Copas, president CWA Local 3406, took aim at that job promise, as well as the company's offshoring of call center jobs to the Philippines, in a letter to the editor published Monday at Lafayette, Louisiana's The Daily Advertiser.

"This trend of overwhelming amounts of offshoring and jobs cuts in the U.S. are all thanks to AT&T using the huge amounts in profits it has reaped from its tax break — over $21 billion so far — to buy back its own stock rather than invest in its workforce and create more jobs. That means top executives and shareholders continue to get richer by paying themselves with stock, leaving the employees whose backs they've built a fortune off of in the dust," wrote Copas.

"We need to hold AT&T accountable for the promises they made on job creation," he added.