The irony of how we use the word "irony" 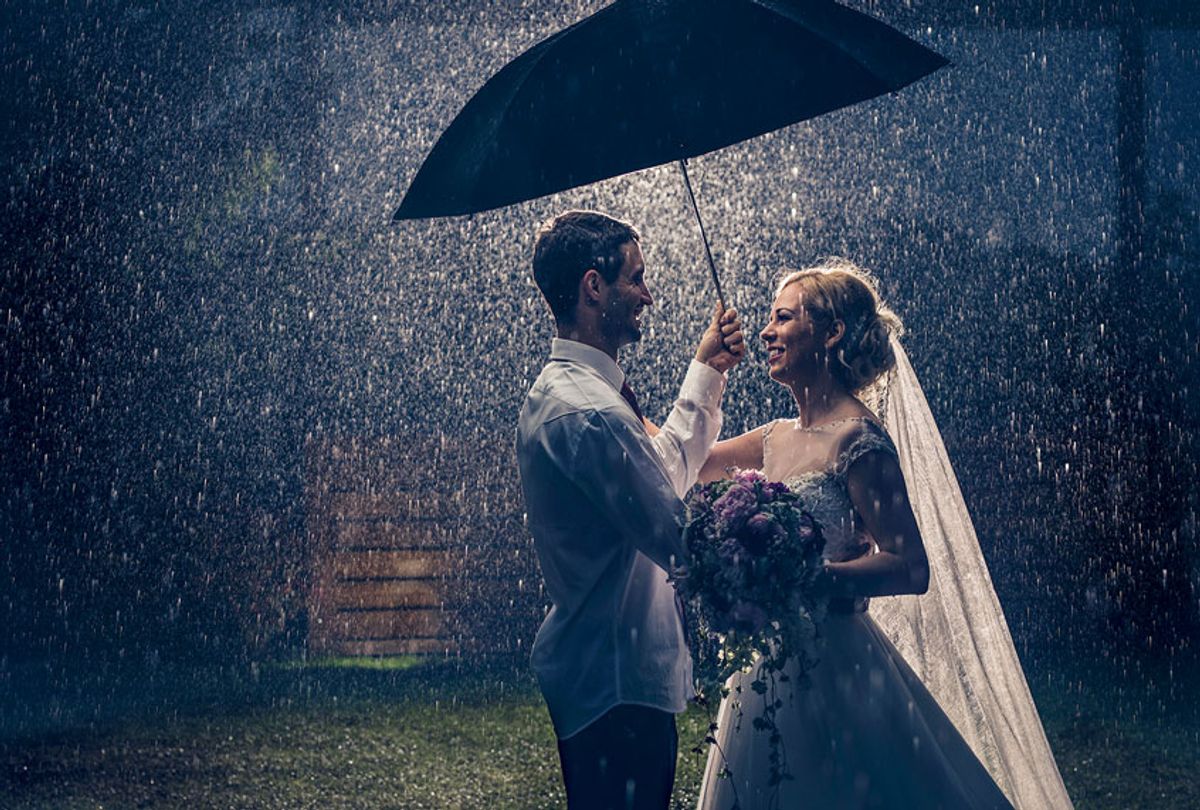 Loving bride and groom looking at each other and communicating while standing on a rain and protecting themselves with an umbrella. (Getty Images)
--

Adapted from "Irony and Sarcasm" by Roger Kreuz (MIT Press, 2020). Reprinted with permission from MIT Press.

In February 1996, Alanis Morissette released the fourth single from "Jagged Little Pill," an album that had gone on sale the previous June. The song was a major hit for the Canadian singer; by mid-April, it had risen to number four on the US Billboard Hot 100, and it remains her highest- charting song. Its success is noteworthy because the subject matter is unusual for a popular music hit: it's all about irony. Or is it?

The song, which is called "Ironic," consists of five verses, not counting repetitions, and contains eleven specific instances of purported irony. Examples from the chorus, which repeats twice, include the following:

English teachers, language mavens, and pedants of all stripes were quick to point out that Morissette's examples didn't match the dictionary definition of situational irony. To cite one example, the Washington Post ran a story that characterized the song as an "example of rampant Irony Abuse." Although definitions differ, most dictionaries describe situational irony as an incongruity between expectations and outcomes, such as when a result differs from what was intended. The Oxford English Dictionary goes further by suggesting that the outcome is "cruelly, humorously, or strangely at odds with assumptions or expectations."

To her credit, Morissette has been more than willing to admit that the instances she set to music may not meet everyone's understanding of the term. In 2015, for example, she appeared on "The Late Show" and performed an updated version, with help from host James Corden. Among her new list of ironies (such as buying an iPhone on the day before a new model is released, or encountering a traffic jam when using Waze), she included "It's singing 'Ironic,' but there are no ironies."

Situational irony has existed for as long as humans have been able to appreciate unexpected occurrences or poignant outcomes. Some events seem utterly mundane, while others seem to be charged with ... something. The issues are what that something is, and the term or terms we should use to refer to it.

Even before the song "Ironic" brought such issues to the fore, researchers had begun to explore the parameters of situational irony. In one of the first research projects on this topic, the psychologist Joan Lucariello developed a taxonomy of situational irony. She identified twenty-eight different types and classified them under seven general headings:

Imbalances: inconsistencies or opposition in behavior or in a situation.

Example: the coworker who mocks a colleague for being clumsy, but then trips and falls.

Example: a person who inadvertently wins a contest.

Double outcomes: someone experiences two related losses, or a win and a loss.

Example: a famous marathon runner who dies while jogging.

Dramatic: an observer is aware of what a victim does not yet know.

Example: an examiner who fails a student and then overhears the student expressing confidence about passing.

Example: a well-prepared student who is unable to remember material during an exam, and the harder she tries, the worse she performs.

Coincidence: co-occurring actions or events that have no causal basis.

Example: a person who thinks about a childhood friend she hasn't seen in years, then runs into her the next day.

It's worth pointing out that Lucariello's taxonomy includes two categories that have been described in previous sections: her dramatic category is identical to dramatic irony, while catch-22 seems to be the same as cosmic irony.

In an experiment, Lucariello provided research participants with examples of these ironic types and asked them to rate how ironic they seemed. Some situational categories were perceived as highly ironic. The two that received the highest scores were the dramatic doomed agent (for example, Romeo killing himself at the side of the apparently dead Juliet) and instrumental wins, in which the means to losing becomes the means to winning (two people meet because one is suing the other, which leads to them falling in love).

Other types, however, were rated as relatively poor examples of the irony concept. The two that received the lowest scores were role reversal imbalances (for example, children hard at work see adults enjoying themselves) and foreshadowed losses (a man dreams about dying and then is fatally injured in a car accident). The other rated types fell between these two extremes without any clear breaks between them. This finding suggests that people's conception of situational irony is a fuzzy one: there doesn't seem to be any clear dividing line between situations that we perceive as ironic and those that are nonironic. The perception of irony doesn't seem to be triggered by the presence of specific attributes but is instead driven by resemblance to prototypical examples of the concept (such as Romeo's suicide or the litigants who fall in love).

We can also see this absence of defining criteria for situational irony on the website www.isitironic.com. The site invites visitors to add their own examples of irony and vote on whether examples provided by others are ironic or not. Votes are cast on a ten-point scale ranging from "definitely not ironic" to "definitely ironic." The vote tallies rarely exceed 80 percent in either direction, suggesting that a great deal of ambiguity and subjectivity exists in making such judgments.

Not surprisingly, therefore, almost any use of the phrase "Isn't it ironic?" by a public figure tends to be scrutinized to determine whether the phrase is being used "correctly." In June 2018, for example, Donald Trump used the phrase in a tweet to contrast his work on trade deals and North Korea's nuclear weapons while Robert Mueller's investigation continued unabated. Several media outlets were quick to accuse the president of using the term incorrectly, and some compared his usage to ... Alanis Morissette's.

So was Morissette truly singing about irony? The unsatisfying answer is that it depends on a particular person's expectations, and how he or she thinks about concepts like coincidence or fate. Her examples might qualify as situational irony, broadly defined. However, the best fit may be with cosmic irony. If the universe is giving you ten thousand spoons when all you need is a knife (verse five), it becomes hard to argue that some malevolent force isn't in charge of your destiny. It's also possible that she was being verbally ironic when singing about situational irony in "Ironic."

Roger Kreuz is Associate Dean and Director of Graduate Studies in the College of Arts and Sciences and Professor of Psychology at the University of Memphis. He received his doctorate in cognitive psychology from Princeton University. His research on discourse, pragmatics, and verbal irony has been reported in the Wall Street Journal and the Washington Post. With Richard Roberts, he has written books on second-language learning, cross-cultural communication, and language and aging. He is the author of "Irony and Sarcasm."