Astronomers discover an exoplanet where it rains iron

The atmosphere of WASP-76b is straight out of science fiction 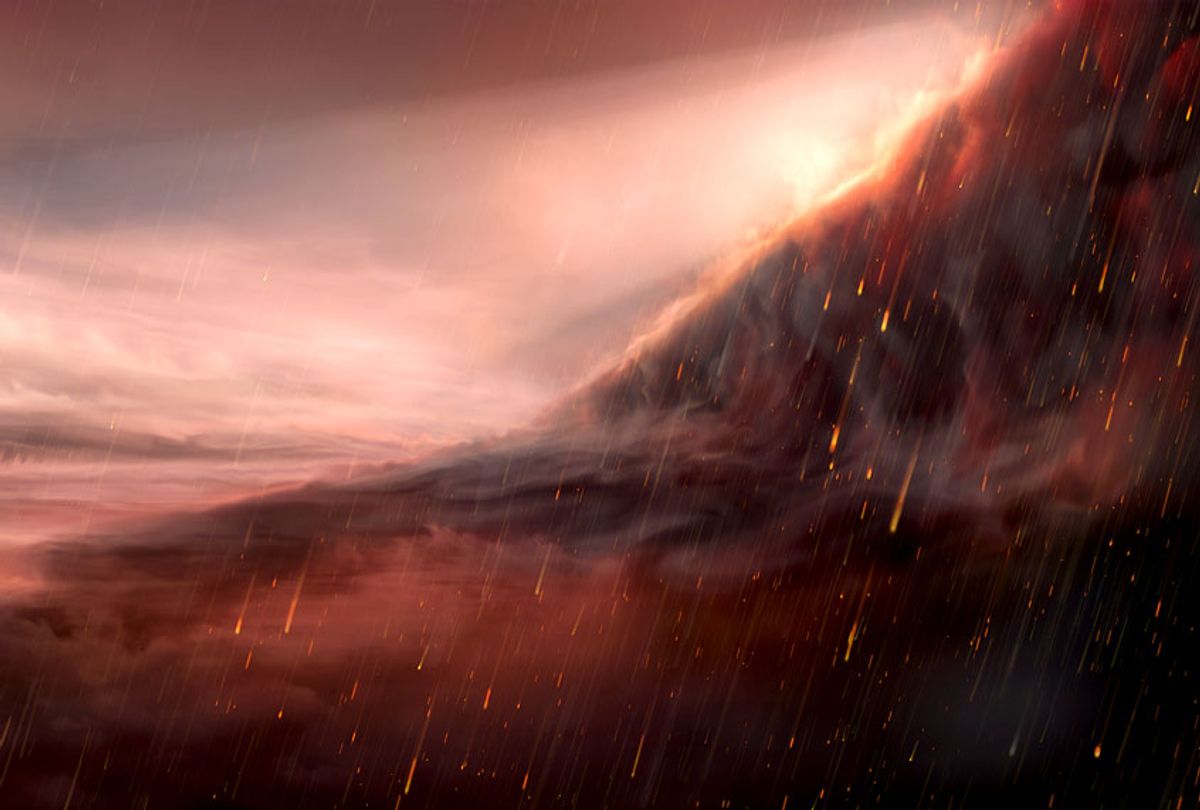 This illustration shows a night-side view of the exoplanet WASP-76b. The ultra-hot giant exoplanet has a day side where temperatures climb above 2400 degrees Celsius, high enough to vaporise metals. Strong winds carry iron vapour to the cooler night side where it condenses into iron droplets. To the left of the image, we see the evening border of the exoplanet, where it transitions from day to night. (ESO/M. Kornmesser)
--

"One could say that this planet gets rainy in the evening, except it rains iron," David Ehrenreich, a professor at the University of Geneva in Switzerland, said in a press statement.

Ehrenreich led a study, published Wednesday in the journal Nature, of this exoplanet located an estimated 390 light years away in the constellation of Pisces. The peculiar iron rain happens because one side of the planet perpetually faces its parent star, wreathing one side of the planet in eternal daylight. Its opposite side experiences perpetual night. This is known as a tidally locked orbit, meaning that WASP-76b orbits its star once for each time it rotates once around its axis. That makes it similar to Earth's moon, which is also tidally locked in its orbit around the Earth — which is why we only ever see one side of the Moon.

According to the research, WASP-76b receives thousands of times more radiation than Earth on its day side from its parent star. The extreme heat on the star-facing side causes metals like iron to evaporate into the atmosphere; the radiative heat then causes these molecules to separate into atoms. Then, the extreme temperature difference between the day and night side creates very gusty winds that carry the iron vapor to the night side, where it condenses and rains down.

"The observations show that iron vapour is abundant in the atmosphere of the hot day side of WASP-76b," María Rosa Zapatero Osorio, an astrophysicist at the Centre for Astrobiology in Madrid, Spain, and the chair of the exoplanet observation instrument's science team, said in a press statement. "A fraction of this iron is injected into the night side owing to the planet's rotation and atmospheric winds. There, the iron encounters much cooler environments, condenses and rains down."

The droplets rain down in liquid form, not as metal hail. An artist's impression can be viewed here.

Not only are the day-night temperatures drastically different, but using the ESPRESSO instrument — an acronym for "Echelle Spectrograph for Rocky Exoplanets and Stable Spectroscopic Observations" — on the European Southern Observatory's Very Large Telescope, researchers identified iron vapor at the border of the evening side that separates it from the day side.

"Surprisingly, however, we do not see the iron vapor in the morning," Ehrenreich said. The reason, he added, is that "it is raining iron on the night side of this extreme exoplanet."

As explained in the study:

[Iron] must condense across the nightside. Nightside clouds have been suggested from thermal phase curves of hot gas giants. On WASP-76b and similarly hot planets, these clouds could be made out of iron droplets, since liquid iron is the most stable high-temperature iron-bearing condensate. Hence, it could literally rain iron on the nightside of WASP-76b.

Iron, a conductive metal, is one of the most common constituents of the Earth's crust. It is also crucial to biology: the red color of blood derives from iron atoms in hemoglobin. But that does not mean there is life is on this exoplanet, at least not as we know it.

"We cannot say with absolute certainty, but with all probability there's no life on WASP-76b, surely not the life we know: the planet is really hot, about 2500° [Celsius] on the day side, and is Jupiter-like, big and gaseous, really inhospitable for conventional life," Stefano Cristiani, one of the authors of the paper, told Salon in an emailed statement.

The rust-red color of the planet Mars, too, is due to its iron-rich composition. In the universe, iron is one of the last elements created in fusion in super-hot and super-dense stars before they sputter out and cease fusion.

WASP-76b is another entry in the running list of planets whose environs seem straight out of science fiction. On another tidally-locked gas giant, HAT-P-7b, scientists suspect there are clouds made of ruby. On Kepler 13Ab, it "snows" titanium oxide, which is a relative of the UV-blocking component of the strongest sunscreens we use here on Earth. Stanford Linear Accelerator researchers believe Neptune and Uranus may experience diamond rain. And on HD 189733b, observational data suggests that glass rains down from the sky. "Getting caught in the rain on this planet is more than an inconvenience; it's death by a thousand cuts," NASA explains. "This scorching alien world possibly rains glass — sideways — in its howling winds."