Bernie's not imagining it: He makes political reporters personally uncomfortable, and they hate him for it 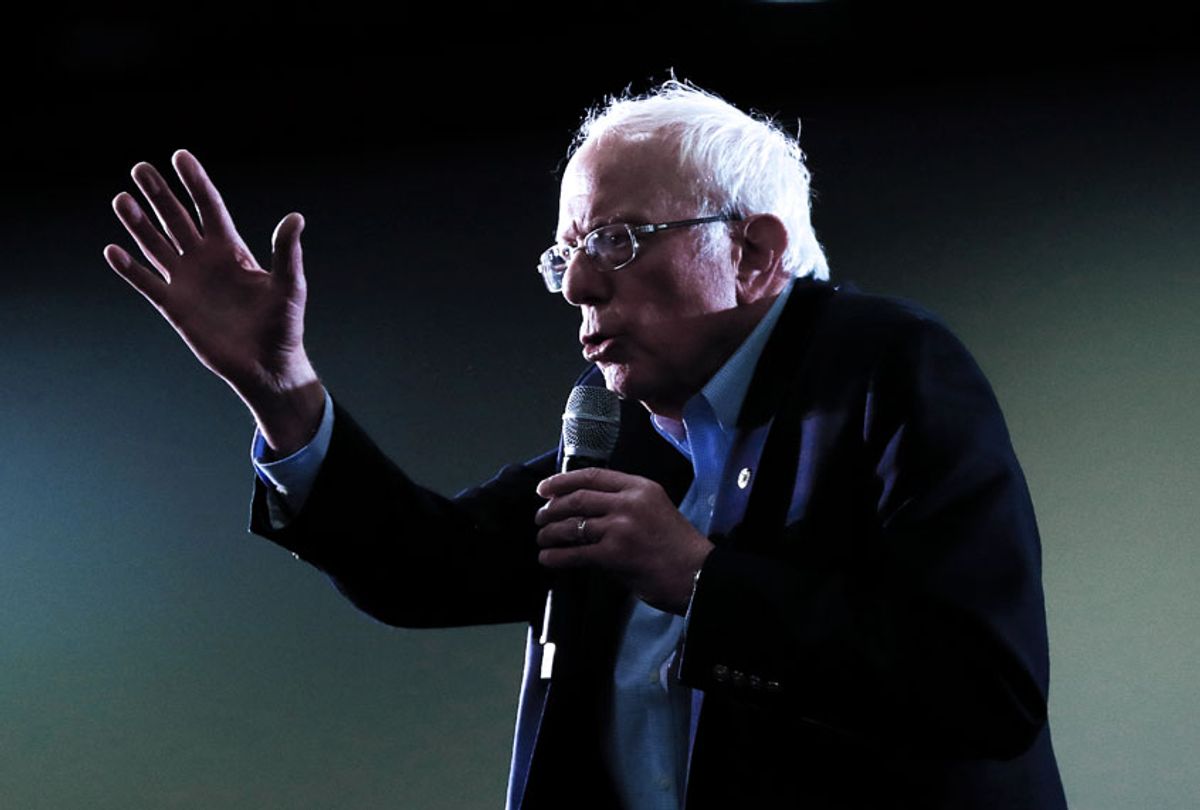 When Sanders rails against the corporate-friendly status quo, it rubs them the wrong way. Accepting the status quo as fundamentally reasonable is a prerequisite for succeeding in modern mainstream political journalism. Anything else makes you an "activist."

When Sanders says that accepting corporate money is corrupting, they feel attacked. It's not just that most of their paychecks come from giant corporations, it's that their Washington is awash with corporate money. It funds their spouses and their friends. It buys them drinks.

When Sanders speaks in moral absolutes and refuses to compromise on core values, they respond with contempt at his inflexibility — because they feel remorse over their own moral flexibility.

That Sanders built a major political campaign funded by millions of individual contributions and without lavish fundraisers; that he built a cross-generational, multi-ethnic, socioeconomically diverse movement that will have lasting impact even if he doesn't win the Democratic nomination – that makes them feel stupid. Because they said it couldn't be done.

They don't hate him because their corporate masters tell them to. They hate him because he is a walking, breathing, sometimes yelling reproof of the sacrifices they have had to make to succeed in their chosen profession.

And then there's his tone. Here's how Bernie Sanders talks — this from a session he held with public-health experts on Monday in Detroit:

Does anybody in their right mind believe that if you're rich, you should be able to afford a vaccine and save your life, and the poor have got to die? Is that really where we're at in the United States of America?

But to the extent that they have internalized the arguments for a system in which tens of millions of Americans remain uninsured, that is kind of what political journalists believe. They have come to peace with a system of grotesque inequality, and socialism for the rich.

They cite things he says — for example, that accepting corporate money makes you beholden to people who don't want fundamental change — as examples of how off-putting he is, and how contemptuous he is of ideologically impure ideas, when it's just, you know, the truth.

They missed a helluva story

Consider what Bernie Sanders accomplished — as cribbed from The Nation's endorsement:

But you wouldn't have gotten a particularly good sense of that reading the mainstream media.

Will Bunch, the stand-out national columnist for the Philadelphia Inquirer, wrote last month:

Bernie's rise — and the everyday people fueling it, from college students to first-time Latinx voters to fed-up warehouse workers and Uber drivers — is a hell of story. It's just not the story the elite mainstream media — the dominant cable outlets and national newspapers that are largely led by Baby Boomers (full disclosure: my own generation) and which employ the now aging veterans of their favorite campaigns as anchors and pundits — wants to tell.

Indeed, they seem unfamiliar — even immune — to what's driving Sanders's movement, which Bunch identified this way:

The sense of fundamental unfairness in this country — epitomized not just by the unhoused sleeping on car seats in a supposed "boomtown," but also by staggering college debt, medical bankruptcies, and a lack of child care — is fueling a political revolution that has put Sanders on a White House trajectory.

And, as Bunch points out, those elite journalists have made very little effort to understand any of this — say, by interviewing regular, struggling Americans:

The elites who populate the highest levels of media punditry, run the Democratic Party, or get paid ridiculous sums to design nonworking apps or buy off Instagram meme-makers to pretend that Bloomberg is cool still don't have time to talk to everyday voters about why they are so angry. They are instead busy searching for a messiah that will let them go back to their Sunday morning mimosas without worrying about a president who might start a nuclear war with a tweet. They are missing the real revolution — again!

Kyle Pope, the editor of the Columbia Journalism Review, concluded the same thing:

Once again, the echo chamber of the political reporting class is forcing it to miss a story as it materializes around them. So embedded are they in the status quo, and so determined to defend it, that they are treating the rise of Sanders as a personal affront. And indeed it is. Theirs is precisely the worldview Sanders is raging against. It is the same sneering, dismissive approach to coverage that we saw applied to Trump in 2016.

The subtext behind much of the disdain is a partly a deep-seated sentiment that Sanders, if nominated, has little chance of winning the general election. But it's also partly — and more insidiously — that many journalists don't identify easily with Sanders in the same way they do with, say, [Elizabeth] Warren or [Beto] O'Rourke or [Pete] Buttigieg.

The first part is arguably more disturbing than the second. It's bad enough for political journalists to allow personal feelings to affect their news judgment. But it's even worse for them to be writing with partisan considerations uppermost in mind.

NYU professor and media critic Jay Rosen has written extensively about the political journalism profession's devotion to the "view from nowhere" (a detachment that prohibits taking sides on political issues, especially affirmatively) and "savviness" (the need to feel above it all). The view from nowhere precludes elite political journalists from even hinting that Sanders' strongly-held views could actually be valid. And their desire to appear savvy translates into contempt.

Political journalists are also deeply conditioned to find balance between the political parties. As Brian Beutler wrote for Crooked:

How does that play out with Sanders?

Sanders's candidacy comes as an enormous relief to practitioners of this kind of journalism. As the most left-wing member of the Senate, and perhaps of the whole Congress, he allows political journalists to fall back on platitudes about the parties catering to their extremes, without examining the content of their agendas or their political styles.

The quintessential byproduct of this journalistic dysfunction is the news article likening Sanders to Trump. Sean Sullivan and Robert Costa provided a recent example of the species in the Washington Post, writing:

Four years after Trump seized control of the Republican Party with a right-wing populist movement, a new populist crusade has risen on the left, fueled similarly by grievance and anxiety and powered by Sanders's remarkable drive to dispatch Trump from the White House.

Each is powered by a disdain for elites they perceive as having flourished while other Americans suffered, a rejection of the establishment and the figures who have controlled it, and a contempt for the institutions that over the decades have blunted, as they see it, the success of efforts like theirs.

Creating any kind of moral equivalence between Trump and Sanders is grotesque. An arguably inapt description of both as "populist" aside, there is simply no equivalence when it comes to sincerity, honesty and whether the candidates appeal to people's better or worse natures.

But it's the logical extension of the elite political media's tremendous aversion to Sanders.

It's not just that Sanders' policies are interpreted by many elite journalists as scolding. There's also the actual scolding.

In an article for CJR, Sanders shared a blistering critique of modern political journalists, even going so far as using the words of a legendary newsman against them:

Real journalism is different from the gossip, punditry, and clickbait that dominates today's news. Real journalism, in the words of Joseph Pulitzer, is the painstaking reporting that will "fight for progress and reform, never tolerate injustice or corruption, [and] always fight demagogues." Pulitzer said that journalism must always "oppose privileged classes and public plunderers, never lack sympathy with the poor, always remain devoted to the public welfare, never be satisfied with merely printing news, always be drastically independent, never be afraid to attack wrong, whether by predatory plutocracy or predatory poverty."

Sanders insulted the very people who talk about him on TV:

At precisely the moment when we need more reporters covering the healthcare crisis, the climate emergency, and economic inequality, we have television pundits paid tens of millions of dollars to pontificate about frivolous political gossip, as local news outlets are eviscerated.

And he accused the biggest employers of political journalists of corruption:

TV networks that rely on $4.5 billion a year of pharmaceutical ads may be thrilled to sugarcoat our current dysfunctional health care system — but they will never provide a consistently fair hearing for something like Medicare for All, even though polls show that a majority of Americans support such a proposal.

Corporate media organizations sponsored by fossil fuel industry ads may gladly provide a platform for guests who insist that our current oligarchic economy is just great, but as studies show, the same outlets often downplay or omit coverage of the climate crisis that those advertisers are helping create.

Sanders is right about every bit of that, and most political journalists know it.

But they really don't like it being thrown in their faces.