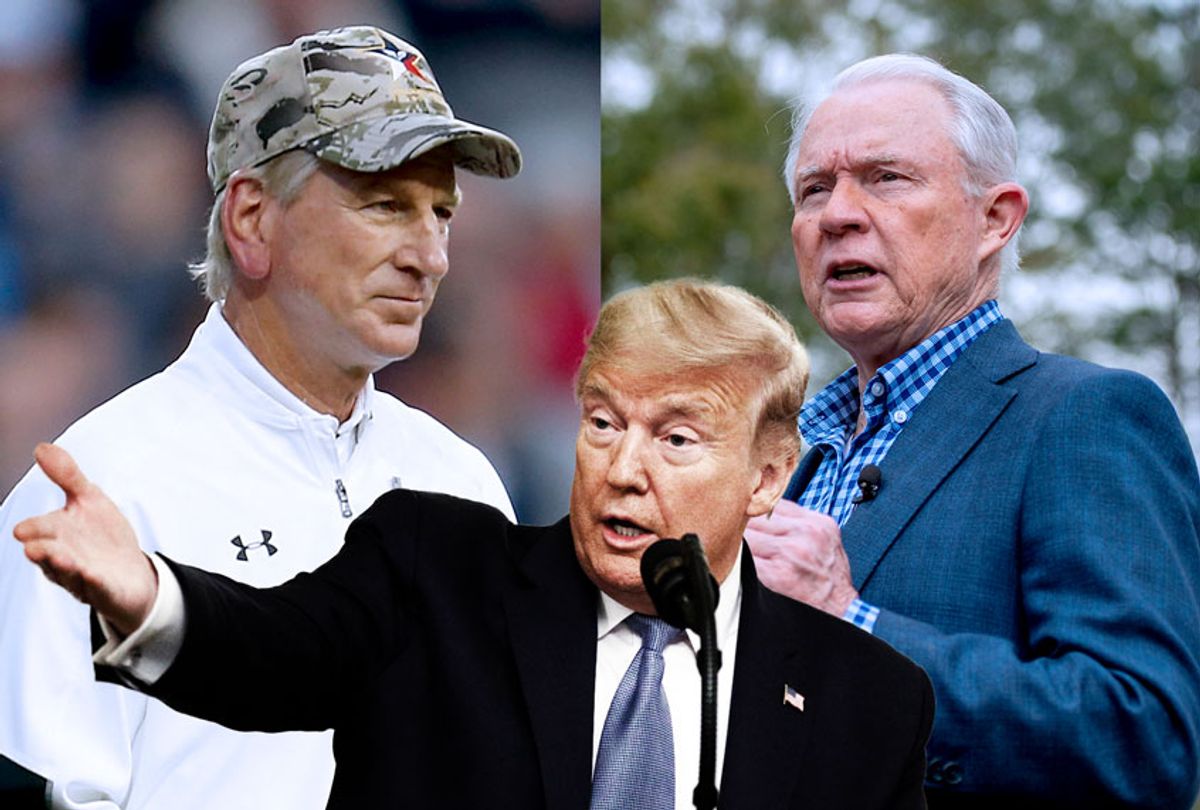 "Tommy Tuberville (@TTuberville) is running for the U.S. Senate from the Great State of Alabama," Trump tweeted Tuesday night. "Tommy was a terrific head football coach at Auburn University. He is a REAL LEADER who will never let MAGA/KAG, or our Country, down! Tommy will protect your Second Amendment (which is under siege), is strong on Crime and the Border, and truly LOVES our Military and our Vets."

He added, "He will be a great Senator for the people of Alabama. Coach Tommy Tuberville, a winner, has my Complete and Total Endorsement. I love Alabama!"

Tuberville, who is best known for his sports career, faces a runoff election against Sessions on March 31 after both candidates failed to receive 50% of the vote in the Alabama Republican Party's nominating contest earlier this month. With 91% of the vote reporting, Tuberville led by a margin of nearly two percentage points. The victor will earn the right to oppose the Democratic incumbent, Sen. Doug Jones, in the fall election.

Sessions has sought to connect himself with Trump's political brand during the race, saying in his post-election speech that "anyone can say they are for the Trump agenda, but talk is cheap. But I have fought on the great issues of our day and won. I have stood alone on facts and principles and won."

Trump did not reciprocate the political embrace, using Sessions' second-place finish as an opportunity to scold him.

"This is what happens to someone who loyally gets appointed Attorney General of the United States & then doesn't have the wisdom or courage to stare down & end the phony Russia Witch Hunt," Trump tweeted at the time. "Recuses himself on FIRST DAY in office, and the Mueller Scam begins!"

Trump and Sessions used to be close friends, beginning when Sessions invited Trump to be an expert witness in a congressional hearing about the cost of U.N. renovations. Sessions later became the first sitting U.S. senator to endorse Trump's 2016 presidential campaign, and his loyalty was rewarded with a Cabinet position.

But the Alabamian fell out of favor with the president after he recused himself from the Russia investigation in 2017, a move which paved the way for former special counsel Robert Mueller's probe into Trump's campaign. After spending the next several months publicly badmouthing Sessions' performance, as well as ridiculing him in general, Trump fired his attorney general in late 2018.

Both Tuberville and Sessions distinguished themselves in the primary earlier this month by overwhelmingly defeating Roy Moore, the 2017 Republican nominee for the Alabama Senate. Moore's previous campaign was derailed by multiple sexual misconduct allegations, including claims of pedophilia. Moore has vehemently denied all of those claims, insisting that he was attacked because of his Christian conservative beliefs. He later sued some of the journalists who reported on the accusations against him.