Republicans are learning that "rugged individualism" won't stop the coronavirus 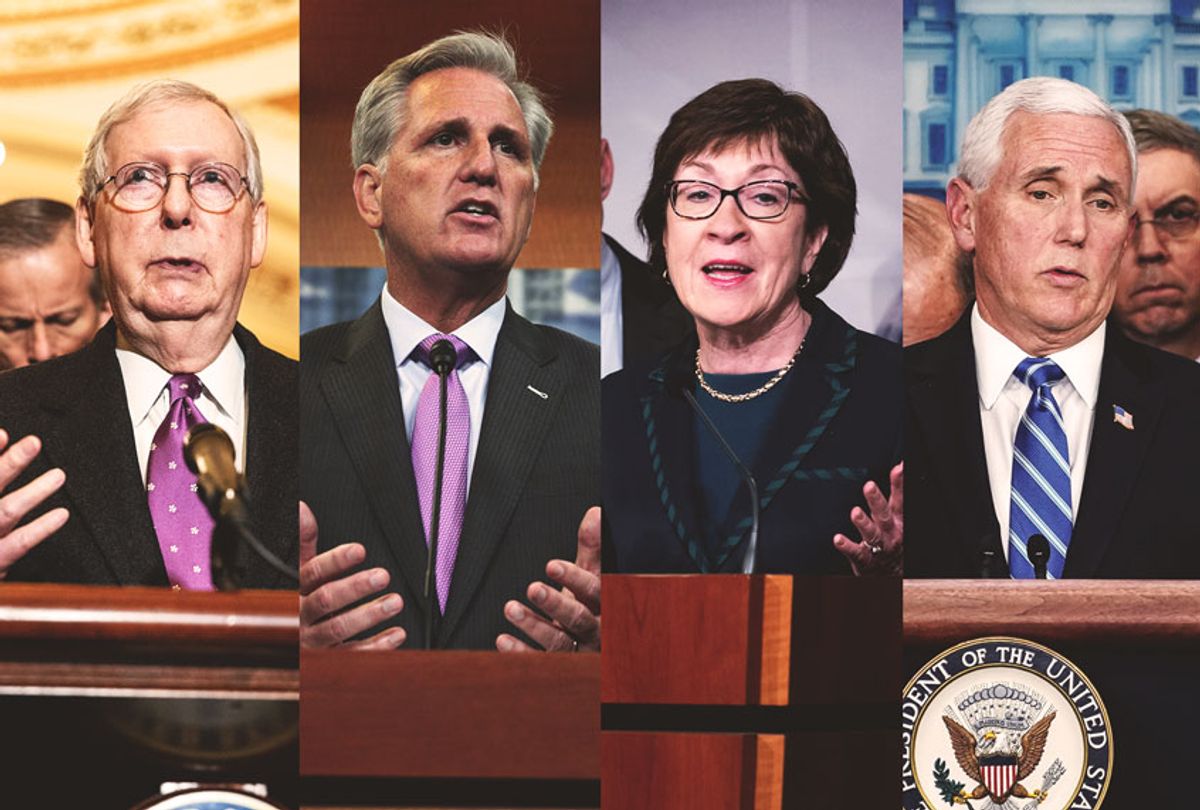 Senate Majority Leader Mitch McConnell smelled an evil liberal conspiracy on Thursday, one designed to steal away his decades of tireless work to kneecap the federal government. The Democratic-majority House had passed a large emergency bill, designed to combat the coronavirus pandemic, and McConnell was absolutely certain Democrats, led by House Speaker Nancy Pelosi, were trying to pull one over on him.

"Unfortunately, it appears at this hour that the speaker and House Democrats instead chose to produce an ideological wish list that was not tailored closely to the circumstances," McConnell said. He accused Democrats of exploiting this situation, saying the bill addresses "various areas of policy that are barely related, if at all, to the issue before us."

There's a lot at stake here, but apparently the big sticking point for McConnell was a provision requiring employers to offer paid sick leave to employees, which McConnell claims would "put thousands of small businesses at risk."

In reality, of course, this is just common sense. As the New York Times editorial board noted, companies that don't offer paid sick leave "are endangering their workers and customers." A lot of workers with public-facing jobs — such as food service workers and retail employees — come into close contact with dozens or hundreds of people a day. But they are the people least likely to be allowed to stay home without losing their jobs, or at least losing a paycheck.

McConnell is so poisoned by his right-wing ideology that he can't see this, or chooses not to. Instead, he's standing firm on the long-standing Republican tendency to view employers as feudal lords who should be allowed to treat employees however they wish — even, apparently, if that means allowing a deadly disease to rip through the population, potentially killing hundreds of thousands of people if it is not checked.

So far, most of the panic over the coronavirus outbreak has been driven by the undeniable incompetence of Donald Trump. At every turn, Trump has made this situation worse — even going so far as to try to discourage testing to bamboozle the public and, I suspect, tanking the markets by screwing up an Oval Office address because he's too vain to wear glasses so he can see well enough to read a teleprompter.

That's all true. But it's also important to understand that the larger Republican Party, even without Trump, is also to blame for what looks to be a serious public health crisis. Right-wing ideology, often marketed as "rugged individualism" but perhaps better understood as an aversion to the very concept of a common good, is one major reason why the U.S. government, hamstrung for decades by Republican power, isn't better equipped to handle a crisis.

This isn't just a Trump problem. This is a widespread Republican problem. For decades, GOP strategy has been consistent: Whenever they get power, they slash regulations and gut spending, with the goal of making government less effective. This is a deliberate strategy to make the public broadly distrustful of government, and therefore increasingly open to shifting more and more power to the wealthy individuals who control the private sector.

This ideological commitment to an every-man-for-himself ideology, which is terrible in any circumstances, is exposed as particularly dreadful in the face of a pandemic. Disease is a reminder that humans are a herd species, wholly dependent on each other for survival, and that government must be a way to formally organize that joint survival pattern. It's not some villain in a racism-inflected right-wing morality fable about the importance of "personal responsibility."

Simply put, we need our government to be able to protect us from disease. Republicans have spent years tearing it down, and even in a crisis are incapable of accepting that "small government" is not always a good thing.

As Max Moran at Talking Points Memo argued, the fact that Vice President Mike Pence — deemed a "normal" Republican — is in charge of the coronavirus comforts some people, because they believe he is more adult and responsible than Trump. Pence's track record suggests otherwise. As governor of Indiana, he oversaw an HIV outbreak that led to 10% of the population people in a single county becoming infected because Pence thought preaching the value of personal responsibility was better than following the recommendations of public health experts.

"[A] Pence-led response is dangerous, not in spite of, but precisely because he is a typical Republican," Moran writes, because normal Republicans "apply their competence and considerable resources" to the task of "protection for the powerful, callousness for the afflicted, and a special disdain for the 'other.'"

The right-wing idiocy that is going to get people killed is all over the Republican response to this situation. House Minority Leader Kevin McCarthy joined McConnell in denouncing the Democratic bill, even though everything in it — including expanding food-stamp spending — will either help slow the spread of the disease or stimulate the American economy to offset the inevitable slowdown caused by this epidemic.

Instead, McCarthy is resorting to racism instead of sensible public health measures, calling the coronavirus the "Chinese coronavirus" for no apparent purpose except to feed the assumptions of the Fox News base than their whiteness and their racist attitudes will somehow protect them. (This assumption, by the way, is leading many older Americans to take serious and completely unnecessary risks with their health.)

The right-wing ideology poisoning is so bad that the coronavirus bill was held up in part because Republicans wanted to inject some anti-abortion language into it. There is absolutely no reason to believe that helping people protect themselves against a viral epidemic will lead to more abortions, but that's the modern GOP for you: They're always worried that somehow or other the Democrats have a sneaky agenda to "let" women have sex. (Which women will undoubtedly do, whether the Democrats authorize it or not.)

Even the so-called Republican "moderates" are to blame for this situation. For instance, Politico reporter Michael Grunwald uncovered this little tidbit about Sen. Susan Collins of Maine from his book about the Obama era.

I had forgotten my own reporting that @SenatorCollins stripped $870M for pandemic preparations out of the 2009 stimulus. pic.twitter.com/VTriR6ZsCS

Zooming out, it's easy to see how decades of damage to our government are likely to make this epidemic worse. Republicans have been stingy about health care spending and have blocked Democratic efforts to increase access, especially when it comes to the Medicaid expansion under the Obama administration. The result is that we have fewer doctors and hospitals ready to handle what we know is coming, and we will probably have a lot of infected people who won't get tested, either because they can't afford it or don't even know where to go for testing and treatment.

By all means, blame Trump for the current crisis. His incompetence is especially central to the panicked reaction of the financial markets. Even a slightly steadier president, whatever his or her party or ideology, would bolster investor confidence a whole lot more.

But this isn't just about Trump. Republicans have a profound hostility to good government, and whatever slapdash response they may grudgingly accept in an effort to save their skins at the ballot box this November will be hamstrung by the fact that they refused, for decades, to invest in the infrastructure necessary to weather the big shock that is hitting us right now. Viruses are the ultimate reminder that humans are interconnected and need each other, and that the ideal of "rugged individualism" is childish and often racist nonsense.