Late-stage capitalism primed us for this pandemic 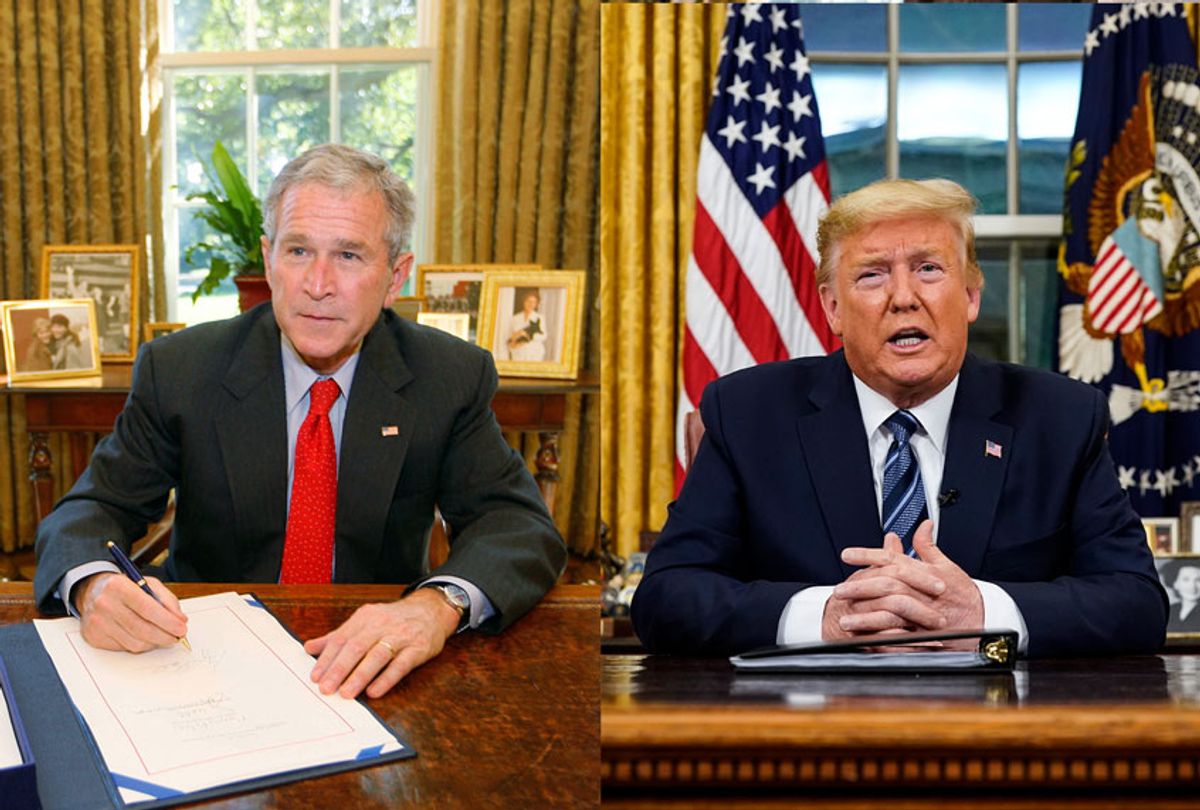 President Bush signs the Emergency Economic Stabilization Act of 2008 in the Oval Office after the House passed the $700 billion financial bailout bill at the White House in Washington, Friday, Oct. 3, 2008. | US President Donald Trump addresses the nation from the Oval Office about the widening coronavirus crisis on March 11, 2020 in Washington, DC. (AP Photo/Charles Dharapak/Doug Mills-Pool/Getty Images)
--

No, this not a bad dream.

You really did just wake up in these "great" United States to find that no matter where you live, your freedom of movement is now constricted. Not by the military, but by the fear of the invisible — a virus you never heard of before it shackled you and your family in a form of self-imposed lockdown.

The power dynamic here is merely a biological progression of what we feel when some malignant cyber-force zeros in on our laptop computer and takes control of it, holding us hostage.

If you are a regular consumer of the corporate news media this unprecedented national public health crisis is being covered through the partisan prism over the incompetence and malevolence of the current occupant of the Oval Office, Donald Trump.

What is being avoided meticulously is any broader and essential discussion about how this precarious planetary moment is a gift to us from late-stage vulture capitalism, which rents our national government as it subordinates public health and the public interest to the accumulation of wealth.

To start the coronavirus meltdown narrative with Trump's efforts to deliberately play down the risks we faced, which hobbled the U.S. response and will lead to potentially thousands of deaths, is to miss the reality that this systemic failure has been decades in the making.

As the concentration of wealth accelerated and the income gap opened up to a canyon, the balance of political power tilted increasingly to the forces of capital, costing organized labor its leverage. Over that time the world was increasingly made safer for U.S. multinationals who successfully played labor markets off of each other as they captured the regulatory and taxation regimes of sovereign nations.

Everything was measured and governed by what encouraged economic growth and the amassing of wealth. Other vital spheres, from the environment to the public health, became secondary to the private pursuit of profit. Consider how hard it was to overcome the entrenched interests of the tobacco industry to provide the public health warnings on cigarettes.

After the Second World War in the early fifties, over a third of the U.S. workforce was represented by a labor union. Though unions have had their issues with corruption, on the whole they offer countervailing pressure to the potential predations of capitalism.

By the time President Reagan fired all of the Air Traffic Controllers (PATCO) in 1981, organized labor represented just a fifth of American workers. By 2019, it was just barely over 10 percent.

What has followed as a consequence is the massive growth of a contingent workforce hovering by the phone or checking their email to see if they have a "gig" or work for the day. This ability of capital to so greatly limit its social contract with workers creates a race to the bottom and leaves tens of millions without health care, unemployment or disability insurance.

It also puts employers and small businesses at a distinct competitive disadvantage if they choose to provide those basic benefits to their employees.

This is where there is an intersection with labor's marginal circumstance and our current national crisis —in which so many Americans will hesitate to get tested for coronavirus or stay home if they are sick. Millions upon millions of Americans cannot afford the expense or the loss of wages; they have absolutely no safety net in the event the test comes back positive and they are sidelined without work for 14 days, much less left with a hospital bill.

The essential role of labor unions as a countervailing pressure against the predations of unfettered capital is most clearly apparent in the airline industry, which is ground zero for many pandemics including this one.

Unions in the public interest

John Samuelsen is the president of the Transport Workers Union International (TWU) that represents 150,000 members in the airline, railroad, transit, university, utilities and service sector.

Last week, TWU had to back up the decision by a flight crew for a major national air carrier to refuse the orders they were given to go right back to work after they had successfully removed a passenger who had disclosed to crew after his flight landed that he had the coronavirus.

As reported by the Daily News, a Long Island man flew from New York to Florida while he had a test pending for the coronavirus. Upon landing in West Palm Beach, he got the call informing him of his status.

"Our crew facilitated the passenger's removal in a very sophisticated way that limited everyone's potential exposure out the back door of the plane with the help of medical professionals that escorted him off the flight," said Samuelsen. "But the crew was ordered back to work by the air carrier to crew up another flight and they rightfully refused because they knew they were now potentially carriers of the virus."

He continued. "They were still in shock and understandably concerned about their own health and when they were ordered to get back on another flight, they said no. The carrier had said the crew could work because they were asymptomatic and that's when the union stepped in."

Samuelsen recounted how, after the union's intervention, elected officials called the air carrier, as did the Daily News.

"We negotiated a package for the crew that guaranteed their economic security with paid sick leave. Ironically, in the process of doing what was right by our members we helped preserve the public health, which was the original goal of the flight crew. Without the union. we would have had another few planes loads of hundreds of unsuspecting members of the public exposed to the virus."

As Samuelsen sees it, proposals that were considered as radical ideas pre-coronavirus, like Senator Bernie Sander's universal health care plan or former presidential candidate Andrew Yang's proposal for a universal basic income, are no longer radical.

"Can you imagine how much less anxiety all American workers would feel right now if things like this were already in place," he said. "It would be a 365 day-a-year economic stimulus plan."

Such a realignment of the balance of power, where private capital's interest and the public interest could be potentially reconciled in the face of something like our current existential crisis, is already happening elsewhere on the planet.

Professor Richard Wolff is an economist who teaches at the New School. He says there is no better example of harmonizing these tensions then in China and South Korea, which have gotten their public and private sectors to collaborate in the face of the current pandemic.

"Look at the percentage of the population that has been tested in these two places and you can see the results of the close coordination between the government and the private sector which we don't have, and our testing numbers reflect that," he said.

Wolff says that the current crisis brings into sharp relief the fundamental divergence between American capitalism and the public health. "There was just no profit incentive for the big drug companies to produce a million of these kinds of tests," he added.

He continued: "Looking at the Center for Disease Control's own press releases we see as of Jan. 17 they publicly acknowledged they were following this virus in China . . . . what we have seen since is this ad hoc, last-minute, under-the-gun response with one eye looking out for the interests of the profit making medical industrial complex and the other eye looking out for the re-election of the President."

If there is a silver lining in the coronavirus moment, it is that it can serve as a teachable moment for our entire civilization. It can help us muster the will to make the lifestyle and economic changes required to face up to the challenge of global warming.