Here's a 2020 endorsement: Andrew Yang — but not for president

He won't be president, but he's the only candidate who grasps the demographic and economic challenge ahead 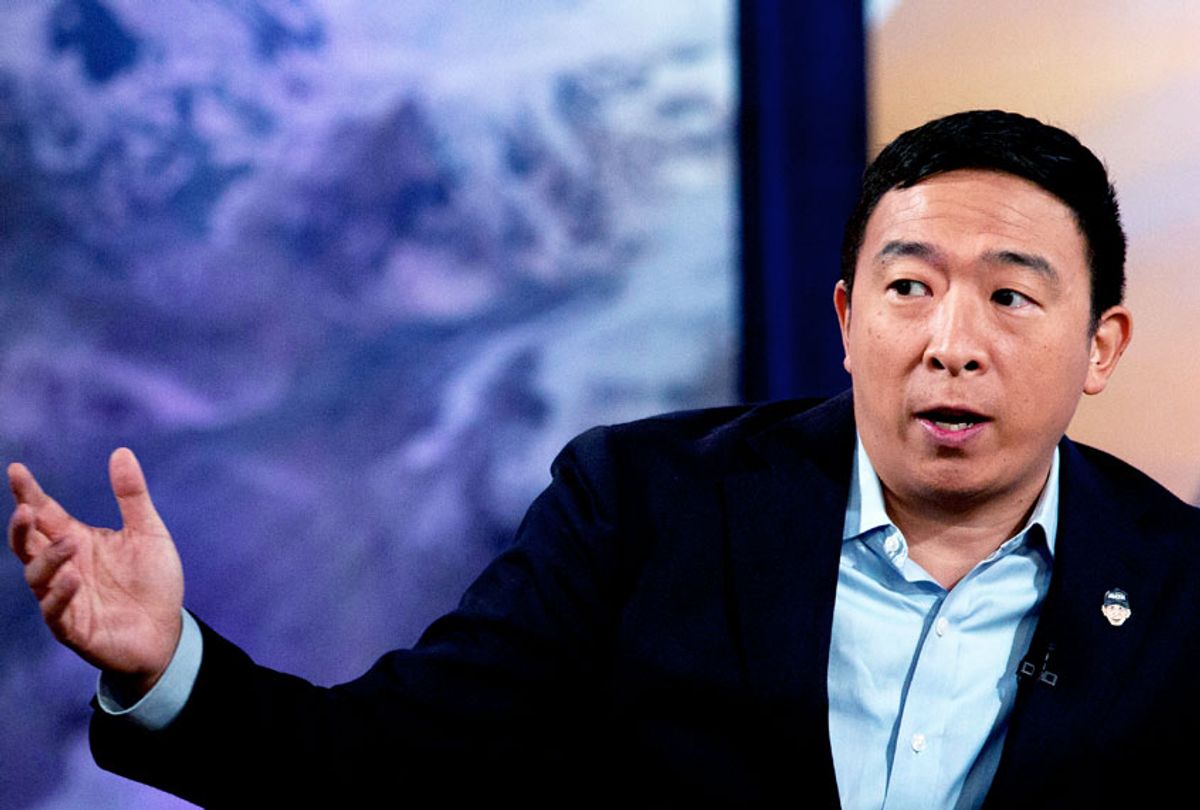 After the fourth Democratic presidential debate last week, I realized the only enthusiastic endorsement I could make this far out was for Andrew Yang — but not for president. Instead, Yang should lead the Department of Commerce under whomever gets elected. because he has a 21st-century, visionary grasp of economics.

American capitalism is a dead man walking, but don’t count on the corporate news media to tell you as the staggering continues before the final collapse. Signs of the existential crisis are as clear as the flaming orange kleptomaniac who occupies the White House. Rest assured, the business press dominated by the Wall Street pyramid builders will tell you that nobody saw it coming. They always do that after a crash comes.

In the past our commerce secretaries have largely been bagmen for the presidents who  nominate them. What’s different about Yang is that he is a successful capitalist who understands the predator aspect of the market economy that has to be subdued if humanity is to have half a chance.

He demonstrated that in the CNN/NewYork Times debate when he was asked to address the opioid crisis:

They ended up levying a $600 million fine against Purdue Pharma, which sounds like a lot of money, until you realize that company made $30 billion. They got a 2 percent fine, and they killed tens of thousands of Americans, eight an hour.

So if the government turned a blind eye to this company spreading a plague among its people, then the least we can do is put the resources to work in our community so our people have a fighting chance to get well, even though this is not a money problem. We all know this is a human problem.

The planet’s environmental crisis is not the only challenge that requires radical remedies like Yang’s "freedom dividend." The great wealth inequality that now defines this nation has only gotten worse since the Great Recession, and we are ill-prepared for the heavy lift ahead as our population ages and jobs continue to disappear or turn into flimsy gigs run out of an LLC in the Cayman Islands.

Between student debt and exploding household debt, Americans are being buried in fiscal promises they will never be able to keep. It is the definition of a rigged system. Debt is the ultimate social control — until it’s not, and we recognize the pernicious reality and throw the yoke off our shamed, slumped shoulders.

While the corporate news media does its best to mock Yang’s proposal of $1,000 a month in universal income, they neglect to mention that in his last book “Where Do We Go From Here: Chaos or Community” that's exactly what Dr. Martin Luther King Jr. called for.

Decades ago, King was a radical voice railing against the gross wealth inequality of his day, and warning of what would happen as capital leveraged automation to the detriment of America’s workforce, while all the profits went to the top of the pyramid.

“A true revolution of values will soon look uneasily on the glaring contrast of poverty and wealth,” King wrote. “With righteous indignation, it will look at thousands of working people displaced from their jobs with reduced incomes as a result of automation while the profits of the employers remain intact and say: ‘This is not just.’”

King was a full-service prophet who not only diagnosed our afflictions but prescribed universal income as a compassionate and total practical remedy.

“We must create full-employment, or we must create incomes,” he wrote. “People must be made consumers by one method or the other. Once they are placed in this position, we need to be concerned that the potential of the individual is not wasted. New forms of work that enhance the social good will have to be devised for those for whom traditional jobs are not available.”

If anything, the socioeconomic conditions of this nation, relative to wealth inequality and the distortions of our winner-take-all, vulture-capitalist economy are much worse today than when King left this earthly plane in 1968.

Since the 1970s, working-class Americans have been getting royally screwed — and both political parties have been responsible. From 1979 through 2018, economic productivity shot up by 69.6 percent, while our hourly pay went up by an anemic 11.6 percent over that 30 years, according to the Economic Policy Institute.

“After adjusting for inflation, however, today’s average hourly wage has just about the same purchasing power it did in 1978, following a long slide in the 1980s and early 1990s and bumpy, inconsistent growth since then,” according to the Pew Research Center. “In fact, in real terms average hourly earnings peaked more than 45 years ago: The $4.03-an-hour rate recorded in January 1973 had the same purchasing power that $23.68 would today.”

But for the corporatists who have rented or purchased our politicians, keeping wages low was not enough to generate the rate of return they required for global domination. To that end, earned income was substituted for a proliferation of household and college debt. So ordinary people often felt they were making progress, but it was all built on the thin ice of massive debt.

In 1946, gross household debt stood at 15 percent of U.S. gross domestic product. It had grown close to 100 percent by the time of the 2008 financial meltdown, according to “The Great American Debt Boom, 1949-2013,” authored by three researchers at the University of Bonn in Germany. After a little plateau following that crisis, debt started shooting up again, and reached $12.68 trillion in the first quarter of this year.

As we slide into the next downturn, households will surely feel the effect of the $20 trillion in household wealth that Wall Street stole from Main Street — and especially from minority communities — via the Great Recession. Stop thinking just in terms of the presidential four-year tick tock. To see the cliff ahead, we have to think in terms of generations.

A great change is upon us. Jobs as we knew them are disappearing at the same time that tens of millions of Americans face the unpaid labor of caring for an aging parent or relative.

At the same time, as Yang observed in last week's debate: “Amazon alone is closing 30 percent of America's stores and malls, soaking up $20 billion in business while paying zero in taxes. These are the problems that got Donald Trump elected — the fourth industrial revolution. And that is going to accelerate and grow more serious regardless of who is in the Oval Office.”

Decades ago, with the passage of Social Security, we collectively recognized the need to rise to the challenges we faced. But then we had a vision, and the leadership to actualize it. Now, vested interests with deep pockets subvert the process, making it difficult to identify the real challenges we face without getting mired in a partisan debate about how we got here.

“As the baby boomers move into the oldest-old age category, the age composition of the older population shifts upward," according to a research paper from the U.S. Census Bureau. In 2010, about 14 percent of the "older population" was 85 or older, but that's increasing fast: “By 2050, that proportion is expected to increase to more than 21 percent…. Although the older population is not expected to become majority/minority in the next four decades, it is projected to be 42 percent minority in 2050, up from 20 percent in 2010.”

So as jobs disappear, the explosion in the work that needs doing will come in the form of caring for a rapidly aging population. In 2017, the Bureau of Labor Statistics informed us that we have 40.4 million unpaid caregivers of adults ages 65 and older in the United States, with 90 percent them providing essential care for an aging relative.

Only a tiny fraction of Americans have set aside sufficient resources to compensate someone to care for them, something most of us will require at some point.

As Yang described during the debate, his universal income proposal is the only one that addresses the challenges we already face in an economy very much rigged against us. He addressed one criticism directly to a central plank in Sen. Bernie Sanders' platform.

“Also, Sen. Sanders, the description of a federal jobs guarantee does not take into account the work of people like my wife, who's at home with our two boys, one of whom is autistic,” Yang said. “[If] we have a freedom dividend of $1,000 a month. It actually recognizes the work that is happening in our families and our communities. It helps all Americans transition.

“Because the fact is ... if you rely upon the federal government to target its resources, you wind up with failed retraining programs and jobs that no one wants," he continued. "When we put the money into our hands, we can build a trickle-up economy from our people, our families and our communities up. It will enable us to do the kind of work that we want to do. This is the sort of positive vision, in response to the fourth industrial revolution, that we have to embrace as a party.”

Demographics are our destiny. It’s all as simple as that frankly nerdy button Yang wears: “MATH.”