From pasta in creamy pumpkin sauce to curried chickpeas on rice, try these recipes to make the most of what you got 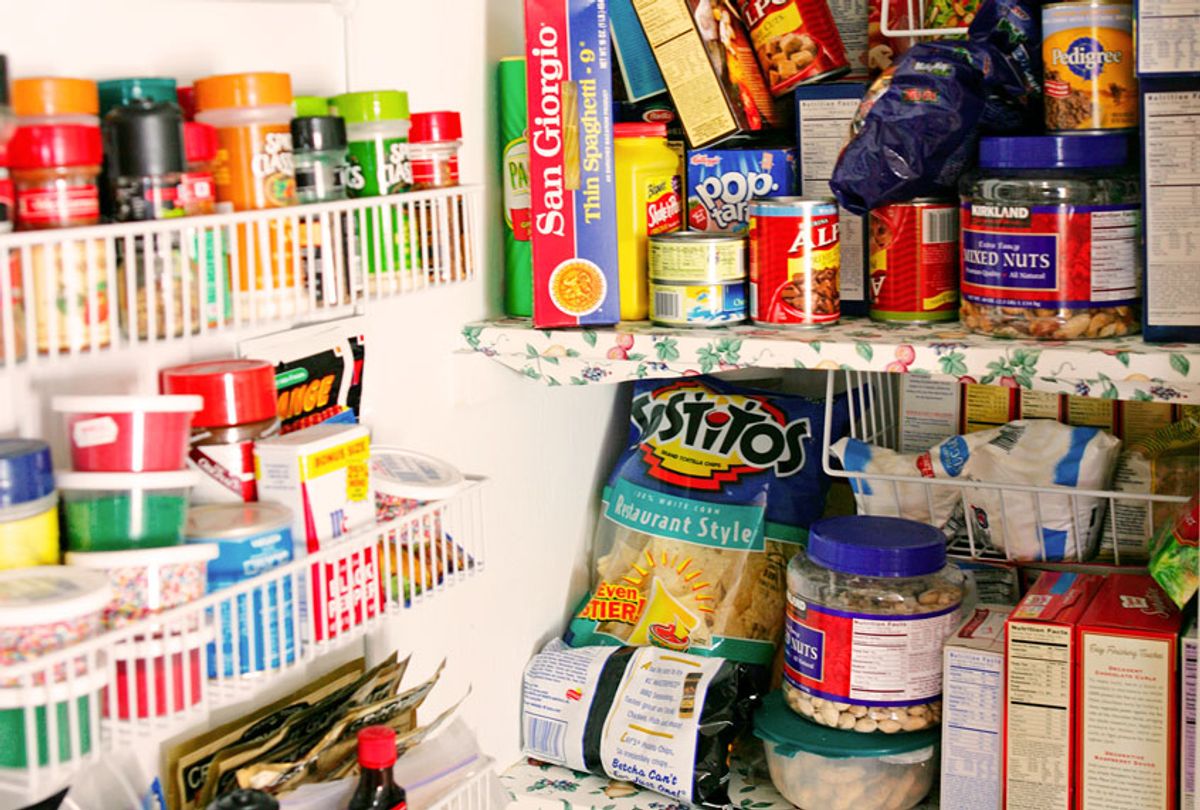 Whether you're trapped inside due to inclement weather, taking an extended sick day at home, rent week is upon you, or it's just finally time to clear out your kitchen of unused items, here are five flavorful dishes that make the most of pantry and freezer essentials.

Have any lingering cans of canned pumpkin from the holidays? This creamy pasta dish is a way to ensure that they won't still be there when autumn rolls around again.

Bring a large pot of water to a boil, and cook 16 ounces of pasta (any shape you have on-hand works, but I like variations that are a little heartier like penne or fusilli) according to the package instructions. Reserve 1 cup of pasta water, then strain and set aside.

In a large skillet, sauté 4 minced garlic cloves and 2 minced shallots in 1 tablespoon of olive oil until lightly browned and fragrant, about three minutes. Add one cup of pumpkin puree (just a note — make sure this is unspiced pumpkin puree and not canned pumpkin pie filling) to the skillet and combine, then add one cup of vegetable or chicken stock. Bring the mixture to a light simmer.

At this point, you can add any dry spices you have on hand — some of my favorites include red pepper flakes, dried rosemary, dried sage, dried thyme and dried oregano. Add one teaspoon at a time to taste. Salt and pepper are essential.

Fold the strained pasta into the sauce, followed by ¼ cup of reserved pasta water. Combine, and continue adding the pasta water a ¼ cup at a time until the pasta is coated in a velvety, smooth layer of sauce.

If you have parmesan cheese — which, when properly stored, can keep up to six weeks in the refrigerator — feel free to add several tablespoons to the sauce and combine, and serve.

Some other additions that would work well with this dish, based on what you have in your refrigerator and freezer, include Italian sausage, pancetta, fresh or frozen spinach or kale, shredded chicken, or roughly chopped and seasoned mushrooms.

I'm one of those people that, after several weeks of trying out new recipes, ends up with an array of bulk bin leftovers sitting in my pantry — not enough to make an entire dish, but it feels wrong to waste them. That's where warm grain salad has become my routine pantry-purge recipe.

Take stock of what grains you have sitting in your pantry — barley, farro, quinoa, brown rice, et cetera. Then take a little time to cook them according to package instructions until you have a combined 4 cups of cooked grains.

Set aside, then check out what fresh and frozen vegetables you have on hand. I tend to use this dish as a way to use up greens. Maybe steam some freezer spinach? Massage some vegetable drawer kale with salt until dark green and softened? Rough-chop some arugula? Regardless of what route you go, you'll want 2 cups of prepared greens to combine with your grains.

Have any nuts in the pantry? Toast 'em. Pistachios, almonds, and pecans are all great, hearty options. If you're low on nuts, but looking for some other ways to add crunch, you can crisp up some chickpeas (simply drain 1 can of chickpeas, arrange on a baking sheet with salt, pepper and two tablespoons of olive oil, then bake at 350 degrees until crispy, about 45 minutes; allow to cool for at least an hour) or quinoa. For the quinoa, cook according to package directions, drain any remaining liquid, then spread onto a baking sheet. Turn the oven broiler onto low, and cook the quinoa for about 8 minutes, rotating halfway through. Keep a close eye on them, they can burn really easily.

Add at least ½ cup of something crispy to the greens and grains.

Now, you're going to want something a little briny; chopped olives, capers, or crumbled feta cheese are all perfect additions. Add at least ½ cup to the salad. You may also want something that provides a little sweetness. Dried apricots, golden raisins, and sliced roasted, red peppers all work. Add about ¼ cup.

Time to dress this dish up with a simple citrus vinaigrette: in a large bowl, combine 2 minced garlic cloves, ¼ cup of olive oil, 2 tablespoons of lemon juice (you can use fresh or bottled), 3 tablespoons of apple cider or white wine vinegar and salt and pepper to taste.

Combine all the salad ingredients in a large bowl with the vinaigrette. If you want to add some additional protein, feel free to top the grain salad with shredded chicken, pan-fried tofu or a seven-minute egg.

Migas is a traditional Mexican — and now Tex-Mex — breakfast dish made by griddling tortilla strips in a skillet until crisp, which are then topped with a mixture of whipped eggs and scrambled. In this version, you can definitely use fresh tortillas if you have them, but (speaking from hangover experience) corn chips work just fine in a pinch.

Regardless, you'll want about a cup of crushed corn chips or shredded tortilla strips to saute in a large skillet with 2 tablespoons of olive oil over low heat. Once crisped and warmed, add six whipped eggs and an additional tablespoon of olive oil to the skillet, increase the heat to medium, and scramble the entire mixture until the eggs are firm.

Divide the mixture among four bowls, and top with jarred salsa and warmed, canned black beans.

This itself is a hearty, traditional meal that stands on its own, but you can absolutely add other toppings like shredded cheese, sour cream, avocado or pan-fried chorizo.

This play on the classic salad combines canned and jarred ingredients in a way that feels fresh (to that end, do feel free to substitute any fresh ingredients that you may have in your refrigerator).

Look to your freezer for steamable green beans, about 1 cup, cook according to package directions. Ideally, post-steam, they will be crisp with a little bite.

Combine the pasta, green beans and potatoes in the large pot, then add two 8-ounce cans of diced tomatoes, two 5-ounce cans of tuna, ⅓ cup of pitted Nicoise olives, ⅓ cup of olive oil and the reserved pasta water. Mix over low heat until a light sauce forms over the pasta. Salt and pepper to taste.

Meanwhile, hard boil two eggs (cook in boiling water for 9 to 10 minutes). Put the boiled eggs into an ice bath, then peel and slice.

Divide the pasta into four bowls, topping each with slices of boiled eggs.

What I love about this dish is that you can achieve major flavor without spending too much time (or money) in the kitchen. It's also essentially carbs-on-carbs, which happens to be the combination that leads to peak comfort food for me.

In a large skillet, heat 2 tablespoons of neutral oil over medium heat, then add 1 cup of finely chopped onion. Allow it to cook until the onions are translucent and just browning, about 8 minutes. Stir in 3 teaspoons of curry powder (or 1 tablespoon of red curry paste) and 2 roughly chopped cloves of garlic, reduce the heat to low and allow the mixture to cook for about 20 minutes.

Meanwhile, cook 2 cups of rice — white, brown or Basmati — according to package directions.

Add 1 cup of vegetable stock to the curry mixture, as well as 2 cans of chickpeas, 1 can of coconut milk, ½ tablespoon cayenne pepper and 1 tablespoon of honey. Bring to a boil, then reduce the heat, allowing the curry to simmer for about ten minutes. Serve over the rice.