The incredible shrinking president: Trump briefly dials down the bombast, too late

Trump finally seems to grasp that his entire presidency has been undermined. But what can he do about that now? 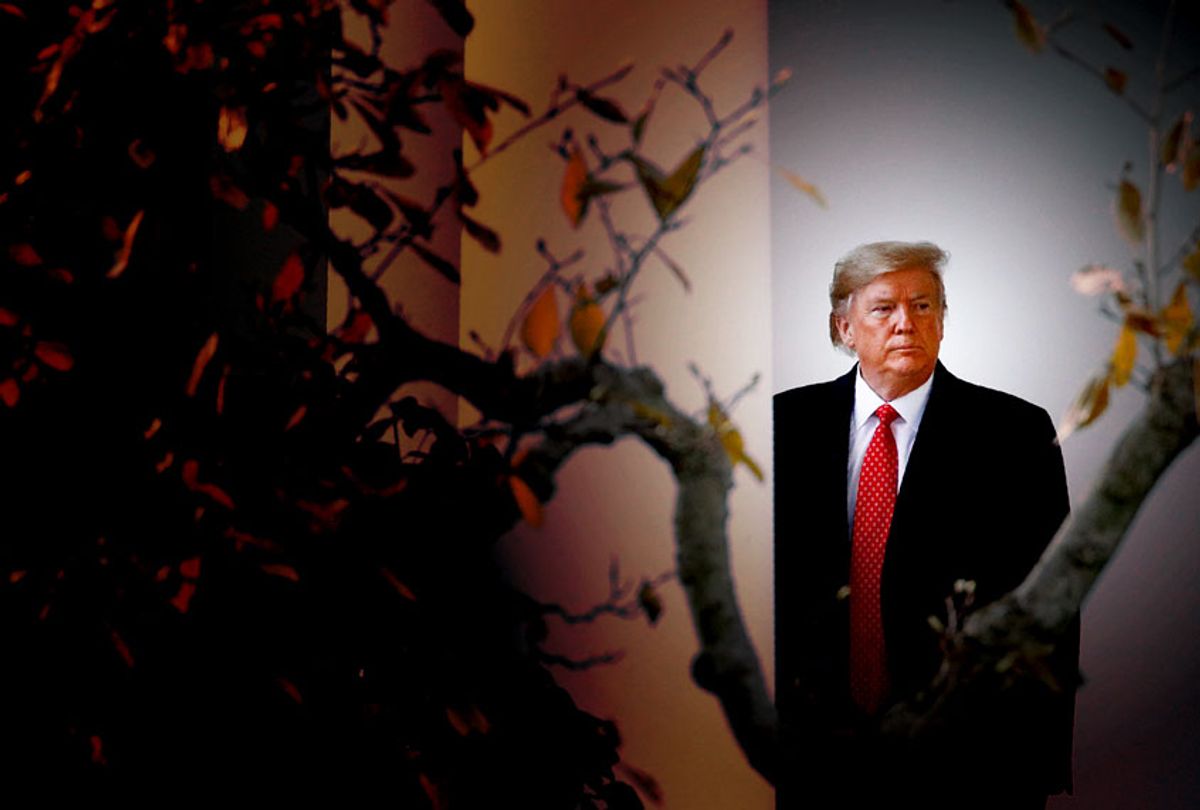 Just a few hours after he shocked and angered the nation's governors by blithely promising a quick recovery — but no help getting them respirators and other urgently-needed medical equipment — Donald Trump took to the podium of the White House briefing room Monday afternoon looking suddenly, if briefly, chastened.

For most of the next hour, to use a term befitting our toddler president, he behaved himself.

For the first time, he seemed to be taking the gravity of the crisis seriously. He gave the American people advice on how to respond that finally went far beyond just washing their hands, all the way to limiting gatherings to 10 people — a more restrictive stance than the CDC had issued just a day earlier.

He used words he hadn't before: He had only mentioned the term "social distancing" twice before Monday's press conference, including one tweet that said, in its entirety, "SOCIAL DISTANCING!"

Where, a day earlier, Trump had said the virus is "something that we have tremendous control over," on Monday he insisted: "Well, when I'm talking about control, I'm saying we are doing a very good job within the confines of what we're dealing with." The virus, he confessed, is "not under control for any place in the world." He acknowledged that it was not going away miraculously next month, as he has long maintained.

He even spoke warmly of his chief nemesis: "I think a lot of the media actually has been very fair."

But Trump being Trump, he couldn't bring himself to apologize for the many lost weeks of insufficient federal response, nor admit even the tiniest flaw: He rated his performance a 10 out of 10.

And soon enough, he was back to sending out vile tweets about the "Chinese Virus" and attacking "failing" governors who had the audacity to criticize the federal response.

At Tuesday's press conference, the big news came from Treasury Secretary Steven Mnuchin's talk about massive stimulus measures, while Trump once again engaged in sadly clueless wishful thinking. "It will pop. One day, we will be standing up here saying, 'We won'. And we are going to say that and we are going to win and I think we are going to win faster than people think, I hope," Trump said.

He also vowed to continue responding aggressively to Democrats who, according to him, don't "play fair," noting, "You know, they have the media on their side, not me."

Media to Trump: Too little, too late

Trump's little foray into presidential behavior was too little, too late, as far as the national media was concerned. His role has been assigned, and it is not the one Trump saw himself playing.

In the last week or so, as I wrote on Thursday and Friday, the elite, corporate-media political journalists who had for so long seen it as their duty to deliver respectful synopses of the latest episode of the Trump Show finally realized there was more important stuff on other networks.

Governors and regional officials have stepped into the leadership vacuum left by Trump and his courtiers. In Northern California, six Bay Area counties announced shelter-in-place orders effective Monday at midnight. The governors of New York, New Jersey and Connecticut joined forces to establish broad restrictions on public life. New York Gov. Andrew Cuomo explained: "This is a national problem, and there are no national rules." Ohio Gov. Mike DeWine ordered bars and restaurants to stop serving dine-in customers and effectively shut down the state's presidential primary on Tuesday.

Governors and mayors, as well as leaders of businesses large and small, stepped into the leadership vacuum to make difficult decisions affecting their constituents, employees or customers. In the absence of unambiguous guidance from the president for the citizens he was elected to lead, the frustration of governors boiled over.

And then on Monday, nearly eight weeks after the first coronavirus case was reported in the United States, Trump conveyed that he at last recognizes the magnitude of the crisis that is threatening lives across the nation, disrupting the economy and fundamentally upending the daily rhythms of American life.

But the long void in guidance — along with the fact that much of what Trump has said about the threat "has been contradictory or false" — means that Trump may have irreversibly taken on the mantle of one of his least illustrious predecessors. Rucker wrote:

Historian Doris Kearns Goodwin drew a parallel from today to the Great Depression in the early 1930s, when President Herbert Hoover was so lacking in leadership and unwilling to commit federal aid to help those suffering that it fell to governors to protect their citizens. That was when a New York governor named Franklin D. Roosevelt rose to national prominence by talking about the government's responsibility to lift up society and launched the first public works programs for unemployed citizens. Roosevelt was elected president in 1932.

[T]rue leaders have been emerging all over the country. Governors, mayors and local officials have been making timely, high-stakes decisions and providing accurate information that sometimes surpasses that dispensed in White House briefings, which remain filled with self-congratulation and fawning praise for the President.

The coronavirus crisis is a dark cloud, but here is its silver lining: Americans are finding ways to link arms and handle it themselves.

Put differently, Americans have learned they can't really count on Washington to deal with this crisis for them. Local leaders, businesses, churches, sports leagues — all have taken up the task, and done so more effectively than the political leadership in Washington.

The qualities of leadership nervous investors yearn for — candor, command of facts, stability and predictability — are qualities that Trump's record shows him temperamentally incapable of providing.

Meanwhile, the New York Times delivered a devastating critique of the Trump Show, almost like a retrospective after a season finale. Maggie Haberman and Noah Weiland wrote:

The culture that President Trump has fostered and abided by for more than three years in the White House has shaped his administration's response to a deadly pandemic that is upending his presidency and the rest of the country, with dramatic changes to how Americans live their daily lives.

Senior aides battling one another for turf, and advisers protecting their own standing. A president who is racked by indecision and quick to blame others and who views events through the lens of how the news media covers them. A pervasive distrust of career government professionals, and disregard for their recommendations. And a powerful son-in-law whom aides fear crossing, but who is among the few people the president trusts …

Crises are treated as day-to-day public relations problems by Mr. Trump, who thinks ahead in short increments of time and early on in his presidency told aides to consider each day as an episode in a television show. The type of long-term planning required for an unpredictable crisis like a pandemic has brought into stark relief the difficulties that Mr. Trump was bound to face in a real crisis.

Sweeping new federal recommendations announced on Monday for Americans to sharply limit their activities appeared to draw on a dire scientific report warning that, without action by the government and individuals to slow the spread of coronavirus and suppress new cases, 2.2 million people in the United States could die.

But Jill Colvin, Zeke Miller and Jonathan Lemire of the Associated Press saw all this as the result of political calculus:

The shift was informed in part by a growing realization within the West Wing that the coronavirus crisis is an existential threat to Trump's presidency, endangering his reelection and his legacy. Trump has told advisers that he now believes the virus will be a significant general election issue and he took note of the clear-eyed, somber tone used by his likely general election foe, Joe Biden, in Sunday's Democratic debate.

At Tuesday's press conference, Trump was asked why he changed his tone on Monday. He said he didn't feel it had changed at all, although he noted, "I have seen that people actually liked it."

Then he returned to his traditional combative tone. "The only thing we haven't done well," he said, "is to get good press."