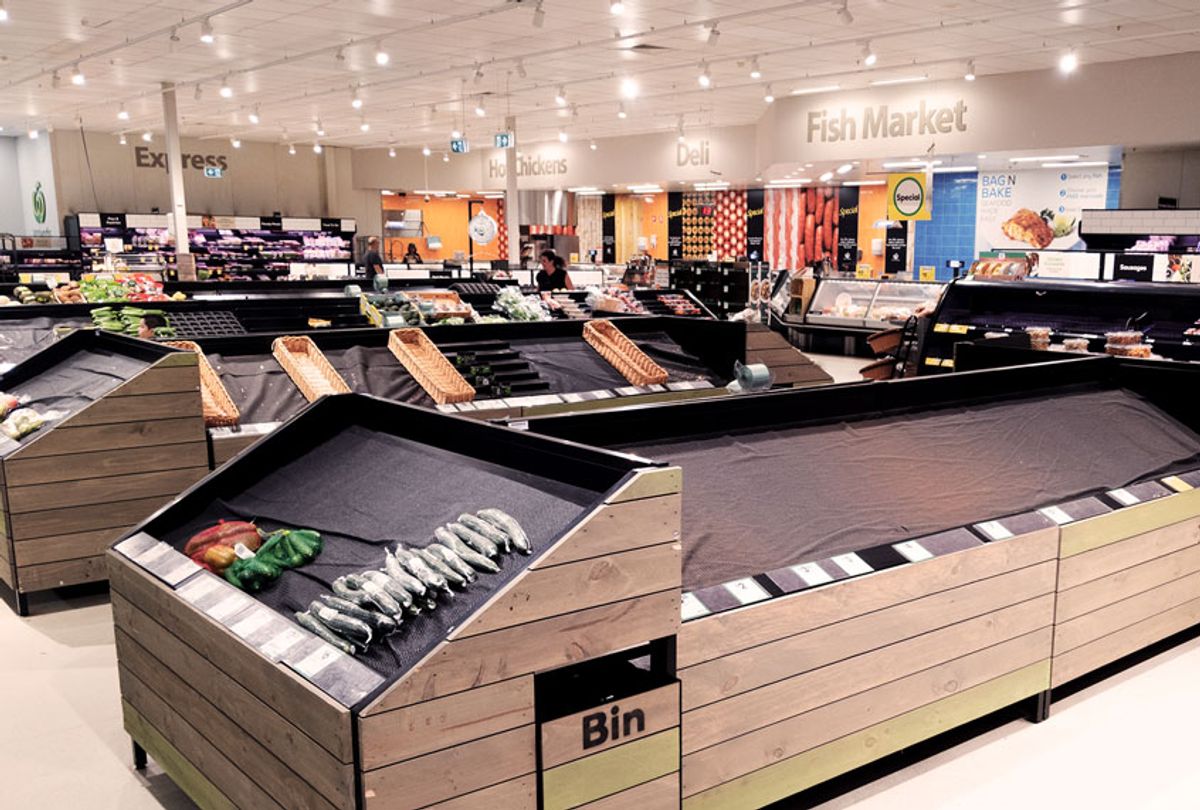 Empty fruit and vegetable shelves in an Australian supermarket after panic buying due to the COVID-19 Coronavirus. (Chris Putnam/Barcroft Media via Getty Images)
--

This story has been updated since publication.

All across the country, grocery stores have been seeing a tremendous rise in customer demand in response to anxieties about COVID-19. Scanning store shelves right now, this is evident; entire aisles of canned goods and toiletries are wiped out. There have been hours-long lines at membership-based bulk stores like Costco and Sam's Club, and some chains have placed limits on certain products like toilet paper, disinfectant wipes, and packaged meat.

And while many restaurant industry workers have been laid off or had hours severely cut in response to a growing number of states — including New York, California, Maryland, Louisiana, Washington, and Kentucky — imposing reduced capacity and service mandates, grocery stores are actively hiring.

In a March 14 email, Kroger, which owns multiple chains – including Ralph's, Harris Teeter, and Fred Meyer – announced that they would be "hiring to help our communities."

"As America's grocer, we're here for our customers and communities when they need us most, with open stores and openhearted hospitality," the email reads. "To help keep our stores stocked with fresh, affordable food and essentials, we're now hiring . . . with immediate positions available."

Grocery store chains like Aldi, Safeway, and Albertsons are also advertising positions, ranging from cashiers and clerks to warehouse workers and delivery drivers. Many out-of-work service industry members are turning to these job postings as a way to gain quick employment; in a private Facebook group for Louisville, Kentucky service industry members, several members relayed positive interview experiences with Aldi.

Area stores, per their postings, was aggressively filling seasonal cashier positions that began at $13.50 an hour. "It's def something to keep the wheels turning and the bills paid til things get back to normal for us," one man wrote.

Ben Honea, a current Lexington, Ky., Kroger employee, says that customers have, by and large, been understanding about issues with keeping products in stock.

"There are exceptions of course," Honea said. "A few people have gotten mad at us. But all we can do is shrug and apologize."

But interactions he said, between customers have gotten increasingly tense.

"The last couple days have been especially bad — people taking items out of each other's carts. A couple fellas got into a fight over a roast yesterday," Honea said. "One of my coworkers was assaulted in the parking lot by an angry customer, and the police had to get involved. My coworkers and I have slowly watched the panic buying rise over the last two weeks."

And many grocery employees, like Honea, are also concerned about their own health. In response, many of these big-box stores are facing pressure from unions and activists to provide hazard pay for employees whose day-to-day tasks put them at risk of exposure to COVID-19.

"Trader Joe's needs to provide workers hazard pay starting right now," tweeted Trader Joe's Union, an account formed by workers advocating for the store's employees to unionize. "Crewmembers are terrified, knowing their job is putting them on the frontlines of a global pandemic. It is not enough to receive PTO only after being proven sick."

Across the country, cities are shutting down. Trader Joe's needs to provide workers hazard pay starting right now. Crewmembers are terrified, knowing their job is putting them on the frontlines of a global pandemic. It is not enough to receive PTO only after being proven sick.

Chef and philanthropist José Andrés reinforced this message through an early-morning tweet from the aisles of a Washington, D.C. grocery store.

Late at night 2:00 and is amazing how on every supermarket, farmers markets Etc women and men like them will work non stop to replenish every shelve. Next to the Medical staff across the world, people like them are and will be heroes to keep humanity fed! Thank them! #CoronaVirus pic.twitter.com/6J006BbPpU

"Late at night 2:00 and [it] is amazing how on every supermarket, farmers markets etc. women and men like them will work non stop to replenish every [shelf]," Andrés tweeted, going on to say that these are the people that will keep humanity fed during the novel coronavirus pandemic.

It's also on grocery store managers and employees to navigate current sanitation and cleanliness recommendations, while also keeping the shelves stocked. Summer Auerbach is the second-generation owner of Rainbow Blossom Natural Foods Markets, a small chain of organic grocery stores in Louisville.

She says that while their markets have been seeing two to three times the average customer volume, her stores are "thankfully small and adaptable enough" to implement new safety measures.

"So the first hour that we are open at each store, we are reserving those for the elderly and the immunocompromised," Auerbach said. "That started this morning, and the reaction that we have gotten from the community has been so positive. And we've already implemented more sanitation and deep-cleaning practices."

In light of this, it's likely her stores will have to close earlier in the evenings than usual so that time can be spent stocking to ensure that early-morning customers have a full store to shop from, while also making sure that there's enough time dedicated to those sanitation practices.

According to Auerbach, they are still ironing out some of the scheduling details — and are also in the midst of hiring from the community — but that for now, they're simply trying to proactively face the new normal.

This evening, Mother Jones reported that that some states and cities are providing child care for emergency workers so they can do their jobs.

"Minnesota and Vermont have now officially designated another group of workers as emergency personnel: grocery clerks," writes Becky Z. Dernbach. "This means the workers hurrying to stock shelves and check out customers in those states will also receive free child care."