Given the current state of affairs, "Devs" might be more hopeful than it initially looked 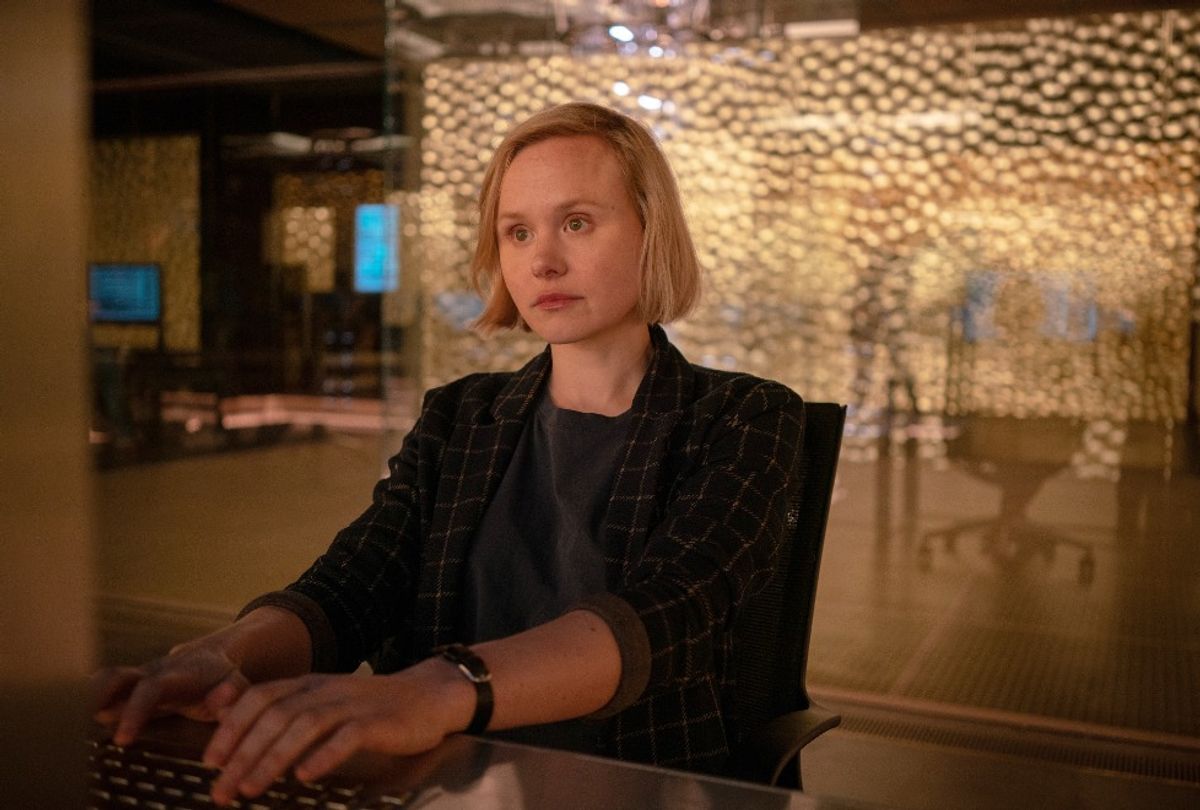 A couple of months ago, "Devs" star Alison Pill transformed what began as a discussion about the show and her chilly project manager Katie into a heady conversation in which matters of physics, philosophy, and way of living collided and merged. All of this grew out of a question of how she constructed her character. In truth, she said, series creator Alex Garland described Katie meticulously enough that the actor didn't have to do much to realize her.

At the same time, she said, "I wanted to have my brain be capable of thinking about some of the questions that this person would be thinking. Because, for instance, infinity is a crazy concept. How do you work with infinity mathematically? What does that even mean? How's anything infinite? We spent a lot of time thinking about that."

Other subjects Garland, Pill and other cast members turned over in their brains included the mystery of the double-split experiment ("It's still mind boggling that potentially the act of an observer affects the way a photon moves," she marveled); the meaninglessness of space and time between two connected particles; contemplating the meaning of wave versus particle ("Is a photon a wave or a particle? It operates as both!").

We discuss space-time, the science of gravity – all of these aspects of physics she studied and understood purely for the sake of understanding a character who, she says, "doesn't really care about such mundanities as office politics." (This line of study probably also came in handy with regard to prepping for her other current role on "Star Trek: Picard," in which she plays a research scientist.)

"The more important part was to try and think about these things as a lay person can, knowing that I would never understand the math behind it, but to say, 'This is what this person has been thinking about for all of her adult life,'" Pill explained. "And that seems to be more important than, you know, the company atmosphere."

"Devs," an FX series airing on Hulu, premiered weeks before the world's everyday operations were altered by a biological threat in the form of a deadly virus that's spreading rapidly and that for the time being, we don't understand. Before that shot to the top of everyone's mind, what Garland's series proposes felt much scarier and exhilarating, which is the concurrent notion that we are living in an existence that is predetermined and yet, somehow, also programmable.

Pill's character and that of Forest, played by Nick Offerman, are the top executives at a quantum computing company called Amaya, where engineers strive to think beyond the ordinary with the hope of one day winning a seat on the elite Devs team. The team's mission is a closely guarded secret. All anyone knows is that hypothetically, if it succeeds, they'll be able to change reality as we know it.

Strangely enough, in the context of what's currently going on in the world attaining that kind of power might seem a little comforting. (Adding to that comfort and the fantasy are the show's extremely sterile aesthetics: From the Devs workplace to the apartments where the action takes place, every line is straight, every corner clean.)

That feeling doesn't manifest in the series itself, of course. Forest and Katie are strange characters, very cold and frightening and in important respects, inhumane. And yet the mission driving them is very human: Forest's grief drives his obsession for the project to succeed, everyone else be damned – especially Lily Chan (Sonoya Mizuno), an employee targeted by Forest and Katie after she asks too many questions about her boyfriend's sudden disappearance and apparent suicide. He works on the Devs team for exactly one day before this tragedy strikes.

"Forest is completely given over to determinism," Offerman explained in a separate sit down. "He's created this whole company and this whole new reality paradigm is based on that thought process. Like any fanatic or a religious zealot that's a given. The scripture is already understood. So how can we make sure everybody gets their loaves and fishes today or whatever miracle it happens to be?"

And while Offerman presents that simply as a character trait without a particularly emotional weight to it, Mizuno explained that working on "Devs" helped her to express some of her disquiet about the rapid pace of tech innovation and the parallel decrease in human consideration.

What she says about technology, interestingly enough, might also apply to the pandemic we're contending with. "Technology is moving and changing so fast and we don't have the structure to control it or, or understand it," she said. "Cyber warfare, cyber terrorism, cyber bullying, social media, there are a lot of dangerous aspects to the internet which I feel frightened of and I haven't much power to do anything about. But in working on something like this, it gives you an opportunity to put your voice into your work."

All of this leads a person to wonder how the central dread of this series plays right now, at a time when technology is a boon and a balm to humankind as we are forced to self-isolate and distance ourselves physically. The threats we see at play in "Devs" aren't taking a break for the sake of the greater good, of course. Last weekend the Department of Health and Human Services was hacked in an effort to slow down its response to the pandemic.

At the same time, many people are placing their hope in men and women who think like Forest and Katie, who are intent on changing the world for the better in the short term and just as likely, for their benefit in the long run. Interpreted thusly perhaps "Devs" is a thriller that takes on a slightly optimistic tone. If it's possible to alter the universe's program, maybe there's hope for us in all this.

That interpretation might not be as farfetched as it initially reads.

"I think all of Alex's work comes down to love," Pill offered. "And he has said this: if we are in a deterministic world, whether it's a choice or not, literally the only thing that matters is interpersonal relationships. And that this is the only reason to live, whether it was because of a cause and whether the effect is love. Whatever happens, it feels real. We have love. This is enough."

New episodes of "Devs" debut Thursdays on FX on Hulu.