"I think China is to blame because (of) the culture where people eat bats, and snakes and dogs" 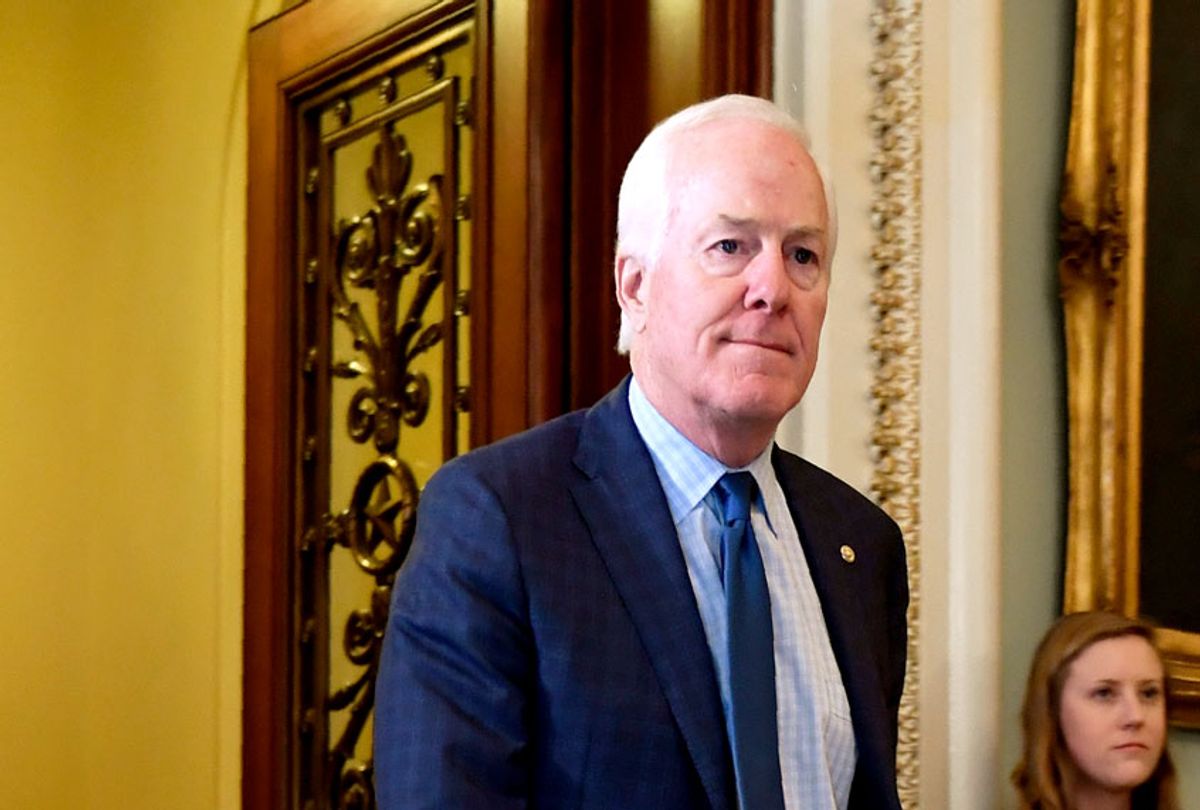 Sen. John Cornyn, R-Texas, added to fuel to the fire when he tried to defend President Donald Trump and other Republicans who use the racist term "Chinese virus" to refer to COVID-19.

The senator mounted a defense based on another racist claim: that China deserves blame for the coronavirus, because its citizens purportedly eat bats and dogs.

When a reporter asked Cornyn about the term "Chinese virus," Cornyn claimed that it was acceptable because the virus originated in China.

"I think China is to blame because (of) the culture where people eat bats, and snakes, and dogs and things like that," he said.

After being told that some Asian Americans were concerned that the phrase "Chinese virus" fosters discrimination, Cornyn claimed that "we're not talking about Asians. We're talking about China, where these viruses emanate from and which created this pandemic."

"Sen. Cornyn is perpetuating false stereotypes about Chinese people and the foods they purportedly eat," Fung told Salon by email. "His misleading words could result in more Asian Americans being targeted for racist harassment and violence by those who blame China for the coronavirus."

She added, "Asian Americans are the fastest growing racial group in Texas, numbering over 1.4 million. Sen Cornyn should demonstrate more concern for the safety of his Asian American constituents and stop distracting people from the public health crisis that affects all Americans, regardless of their race."

"Senator Cornyn's comments further stigmatize and other people of Chinese ancestry," Chou told Salon. "He's evoking fear of different cultures and cuisines without basing anything on scientific evidence. It's alarming that someone in his position would flippantly make such statements that can produce real harm to others."

A number of Republicans have used terms that emphasize the country in which the novel coronavirus originated. Trump has used the term "Chinese virus" in both tweets and statements to the press, with Fox News host Tucker Carlson praising him for not being "intimidated" by critics who call his rhetoric racist. Trump attempted to justify his use of the term by pointing out that China falsely blamed the coronavirus on the U.S.

"The comments made by President Trump intensifies the xenophobia and racism that's become rampant against Asians and Asian Americans globally," Rosiland Chou, a sociology professor at Georgia State University, told Salon on Tuesday. "He's fueling fears against Chinese, specifically. However, people of Asian ancestry across the globe may face collateral damage. These statements are dangerous and erroneously assign blame to people who are as susceptible to the disease as anyone else worldwide."

House Minority Leader Kevin McCarthy, R-Calif., called coronavirus the "Chinese coronavirus" last week, around the same time that Rep. Paul Gosar, R-Ariz., referred to it as the "Wuhan virus." After MSNBC anchor Chris Hayes called Gosar's language "incredibly gross," the congressman responded that it was "just astoundingly ignorant to have all major media refer to it as #WuhanVirus for months but somehow, today, you've decided that's #racist.  If you think this virus cares about your race you probably work for or watch MSNBC. Wuhan Virus. Wuhan Virus. Wuhan Virus."

Cornyn's claims about Chinese eating habits are echoes of remarks made by Fox News host Jesse Watters earlier this month.

"Let me tell you why it happened in China: They have these markets where they were eating raw bats and snakes," Watters said on "The Five" to the vocal protest of co-host Dana Perino. "They are a very hungry people. The Chinese communist government cannot feed the people, and they are desperate. This food is uncooked, it is unsafe and that is why scientists believe that's where it originated from."

"Inclinations to discriminate and perpetuate racial stereotypes about Asians and Asian Americans is rooted in colonialism and colonial projects. In the U.S. specifically, there have been a number of specific anti-Asian laws throughout our history," Chou told Salon in an email at the time. "The policies fix race into place and then fill them with meaning, and people of Asian descent are painted as foreign, uncivilized and alien. And Jesse Watters' comments fall right in line with these negative stereotypes."