When will they ever learn? Corporate media is still letting Trump set the agenda 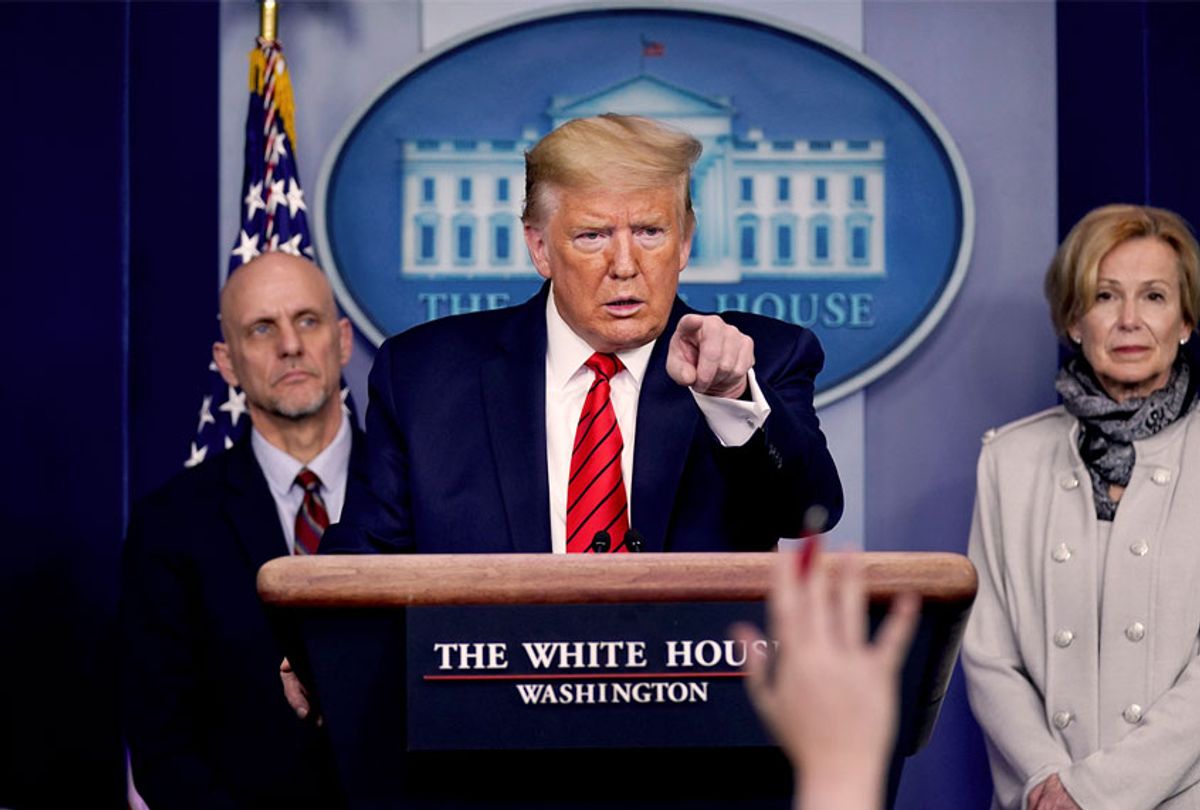 Over the last week, I've written about how Trump's spell on the corporate media finally seemed to be breaking: His weeks of downplaying the crisis and talking about it inaccurately and incoherently had finally led many leading journalists to declare him ill-equipped to lead. They had recognized, at long last, that the power vacuum Trump had created was being filed by more competent people, and that his insistence that he had always taken the coronavirus seriously was the quintessential proof that he was delusional, trying to gaslight America or both.

What I neglected to take into account was that even though they are more willing than ever to point out Trump's flaws and lack of credibility, elite Washington and New York journalists still can't take their eyes off him.

They are still letting him set the agenda.

So for two days running, for instance, the New York Times has given over its banner headline to "plans" from the White House to adopt stimulus measures — rather than articles about the spread of the virus, how to combat it or how badly Trump has set back the response.

The Times coverage is so lame that Nicholas Fandos and Emily Cochrane gave over the second paragraph of the paper's lead story on Thursday morning to two things that aren't even happening:

President Trump invoked a seldom-used wartime law that allows the government to press American industry into service to ramp up production of medical supplies. He said he would send two military hospital ships to New York and California.

As Fandos and Cochrane themselves explained shortly thereafter, Trump didn't actually invoke anything; he called it "a worst-case scenario in the future." And at least one of the ships isn't going anywhere for two weeks or more (an eternity in coronavirus time.)

Why fall all over themselves making it look like they were covering something real, rather than just more empty promises?

I'll tell you why. Because, apparently, a president declaring himself a "wartime president" and calling for "sacrifices" is like some sort of deep, irresistible hypnotic suggestion to the elite media that, rather than making them bark like a dog, compels them to stand up straight and pay undivided attention.

Here are the fourth and fifth paragraphs of that Times story:

After weeks of playing down the outbreak, Mr. Trump appeared on Wednesday to fully embrace the scope of the calamity, saying he saw himself as a wartime president and invoking memories of the efforts made by Americans during World War II.

"Now it's our time," Mr. Trump said at a news conference at the White House. "We must sacrifice together because we are all in this together, and we will come through together. It's the invisible enemy."

President Trump says he now sees himself as a "wartime president." Can he get the nation to overcome its divisions to fight the coronavirus pandemic?

It would be wrong to say the skepticism is gone from the coverage. It is not. Jonathan Lemire and Jill Colvin, writing for the Associated Press, started off their story with the "wartime president" stuff but soon called attention to what they called his "mixed messaging":

Yet he seemed to minimize the urgency of the decision, later tweeting that he "only signed the Defense Production Act to combat the Chinese Virus should we need to invoke it in a worst case scenario in the future."

But enough is enough.

Our major newsroom leaders need to hold emergency meetings today and recenter their coronavirus coverage away from the White House.

Here's the story we journalists need to be covering: The country is suffering terribly in so many ways. The response has been, and continues to be, horribly inadequate.

Here are the questions we need to be asking: How do we make things better? And a distant second: How badly has Trump screwed things up?

And here is the question we need to be answering in every single story we write: What exactly should we be doing, and who should be doing it?

There are so many great stories to be written that don't involve White House stenography.

Sure, we need to take notice of what Trump says. For instance, Trump was generally out of control again during Thursday morning's news conference, ratcheting up his deflection of responsibility and self-aggrandizement.

For the record: He tried to blame China for the spread of the virus in the U.S., saying "if people would've known … it could've been stopped right where it came from, China." He noted approvingly that "somebody was on television saying there's never been a president who's been able to do what I've done." He insisted, "We moved very quickly. The only thing we weren't prepared for was the media." When a reporter confronted him with the gap between his statements and the widespread unavailability of tests in the real world, Trump replied: "I cannot explain a gap. I am hearing very good things on the ground."

Some of the coverage will inevitably attempt to pull some substance from his rambling comments.

But maybe not all of it:

Regardless: This idiocy doesn't need to be a top story, and certainly not the top story.

When it comes to efforts to stimulate the economy, there's more than just reporting out little mini-scoops from the White House and the Hill. The coverage should be constantly questioning the decision-making of people who have repeatedly proven themselves too clueless and corrupt to govern fairly.

How do you best spend $1 trillion? What will really make a difference to ordinary Americans? What can the money buy that has lasting benefits? What concessions — or public ownership — do you demand from corporations that have spent billions on self-dealing stock buybacks and now don't have enough cash to get by?

How will we know when it's safe to come out? That means: When do we start surveillance testing? What's the hold-up? How can we speed things up?

Why are jails and prisons still full?

What are different state, county and city leaders doing, how do they compare, and what seems to be working?

How are different communities and school districts faring?

How can we best help other countries? Is there any moral argument that supports the continuation of economic sanctions against any country?

As I wrote 10 days ago, in the absence of Trump's leadership, our elite newsrooms need to step up. This is a time for our nation's best journalists to enable our nation's smartest people to set the agenda, rather than waiting for the White House to do it.

And let me add: If certain newsroom leaders are incapable of adjusting to the new reality, it's time for them to get them out of the way.