Monday morning in USA of corona: Leadership and faith in times of tribulation

Our Commander in Chief was like the selfish neighbor who strips the grocery store of bread, milk and water 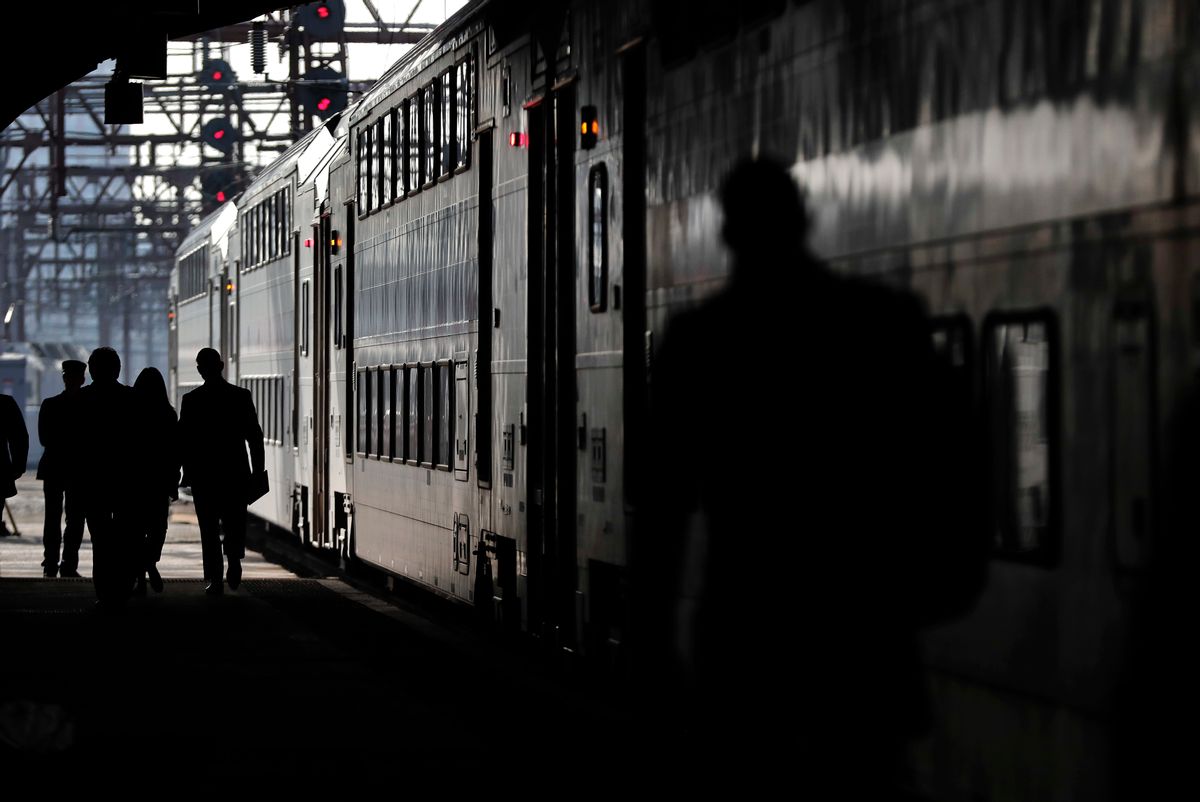 New Jersey Transit commuters walk along a platform to catch a train heading for Dover, N.J., Wednesday, April 5, 2017, in Hoboken, N.J. The heads of the two major commuter rail lines that use New York's Penn Station took turns criticizing Amtrak on Wednesday for two recent derailments that continued to cause headaches for commuters in the nation's busiest rail hub. (AP Photo/Julie Jacobson) (AP)
--

In Neptune the pre-sunrise soundscape was a familiar comfort. Closing my eyes, it was just like any other morning in this seaside town

The lonesome wail of the NJ Transit engine chugging north from Bayhead and the chirping of the birds was the only thing harmonious about this first Monday morning in the USA of corona, a further notice dystopia.

For a few weeks now the public has been subject to incoherent public messaging from the highest levels of our national government with President Trump incorrectly likening the corona virus to the common flu even as the body count mounted in Italy to the hundreds of deaths a day.

With one eye on the markets, and other on the prospects for his re-election, our Commander in Chief was like the selfish neighbor who strips the grocery store of bread, milk and water. In the case of the President what he was stealing was time for us all to coherently prepare for the greatest and most existential challenge we have faced since World War II.

It took several weeks from the CDC's January 17 flagging of the deadly virus to the appearance of Dr. Anthony Fauci, the nation's top epidemiologist, before Congress to set the record straight. ""I mean people always say the flu does this, the flu does that. The flu has a mortality rate of 0.1 percent. This has a mortality rate of ten times that. And that's the reason why I want to emphasize we have to stay ahead of the game in preventing this."

This morning New Jersey's parents started their day with news that the New York City schools, with over one million students were closed. Meanwhile, their schools, unless they lived in Bergen County, were most likely open. They will close.

In the same rush of headlines was the overnight guidance from the nation's Centers for Disease Control "that for the next 8 weeks, organizers cancel or postpone in-person events that consist of 50 people or more throughout the U.S."

That's a lot of risk management for your average New Jersey family to process. They are likely to have in the mix children, parents, grandparents, maybe even great grandparents, with collectively a nearly infinite combination of pre-existing health conditions and special needs that need to be calculated in a new kind of algebra.

All those very specific circumstances have to be factored into the equation that also has to account for real time economic exigencies. And in a nation of nearly unprecedented wealth and income disparity we will be jolted by the realization of just how our economic status will be determinative as to who lives and who dies in the face of a global pandemic in 143 nations that's killed  6,000 people and afflicted 160,000.

Dealing with this familial risk assessment in real time requires a kind of proactive and relational thinking our 'money is time' world does not promote. This is literally that 'money or your life' moment that goes right to the core of our very existence.

We were told initially that children were not susceptible to this disease and there was a wide-spread perception that like other previous viruses, we were only contagious if we were symptomatic.

All that is wrong and getting it wrong in the choices we make could have deadly consequences for our senior citizens and those with pre-exiting conditions.

This disconnect between our leadership and the realities on the ground in the age of mass media is what's set off the panic buying of the basics like milk, bread, eggs and toilet paper. It's a definitional tug of war between the psychology of abundance and scarcity that is as we speak defining the real time American character and our ability to face this crisis collectively with faith in each other.

Consider that the errant and incoherent messaging about the public health is being broadcast into a polity that is already more polarized than at any time perhaps since the Civil War. Millions of Americans revile other Americans based on whether or not they support President Trump.

This great partisan divide now undermines the national ability to achieve the cohesion needed to survive our current Old Testament scale tribulation collectively in a society that has always uplifted the individual.

Even before corona marched from the small print of international medical journals to the huge block print of page one tabloids, this spiritual fracture in America was pronounced but now needs a tourniquet.

In red America, immigrants were seen as an existential threat because the world was a place of finite resources and whatever we have here in America had to be jealously guarded.

This near hysteria, which Trump played like a violin, was blind to the role of America's addiction to the drugs that destabilized our neighbors to the south or to the role of our "free trade" policies that collapsed southern hemisphere rural economies that sent so many northward.

On the defensive was blue America, which saw our nation through the implied abundance represented by the Statue of Liberty as reflected in Emma Lazarus's sonnet "The New Colussus" which welcomed the world's "huddled masses…wretched refuse…homeless" to our "golden door."

The coronavirus is now casting its deadly shadow across the threshold of a divided house that is 2020 America whose occupants are still blind with rage at each other.

In these most precarious times, there has been coherent leadership from our nation's Governors. Gov. Andrew Cuomo over the weekend seemed to be invoking the right scale of national response to this unprecedented public health emergency.

In a New York Times op-ed over the weekend he asked President Trump to "anticipate that, without immediate action, the imminent failure of hospital systems is all but certain. According to one projection, as many as 214 million people in our country could be infected over the course of the epidemic. Of those, as many as 21 million people could require hospitalization."

He continued. "This would crush the nation's medical system. New York State has just 53,470 hospital beds, only 3,186 of which are intensive-care beds. Our country as a whole has fewer than one million staffed hospital beds, fewer proportionately than China, South Korea or Italy."

The New York Governor warned that as a consequence of our nation's inadequately scaled health system we faced "a greater failing and a worse situation than what we are seeing in Italy, where lives ‎are being lost because the country doesn't have the health care capacity."

Gov. Cuomo invoked a kind of FDR response to "build more hospitals, acquire ventilators or modify facilities" and "utilize the Army Corps of Engineers to leverage its expertise, equipment and people power to retrofit and equip existing facilities — like military bases or college dormitories — to serve as temporary medical centers. Then we can designate existing hospital beds for the acutely ill."

Yet, even the Democratic Party is suffering from a disconnect between the circumstances of the American people on the ground and its own discourse.

The word "I" was more prominent than any other pronoun.

Joe Biden was taking about high-speed rail and I am wondering if the Stop & Shop will have bread, milk, toilet paper or eggs in the morning. We were debating how much my pre-existing health conditions at 64 should limit my travels. Where our grown children and their significant others be? What about our grandson?

In a better world the two men, who have both committed their lives to public service, should have upended the CNN preordained format and given the journalists the night off and just had a conversation invoking remembrances of a time when Americans had faith in one and another.

Surely, this is what this hour requires.