Lou Dobbs: Trump "was right and frankly Fauci was wrong” about unproven drug treatments for COVID-19 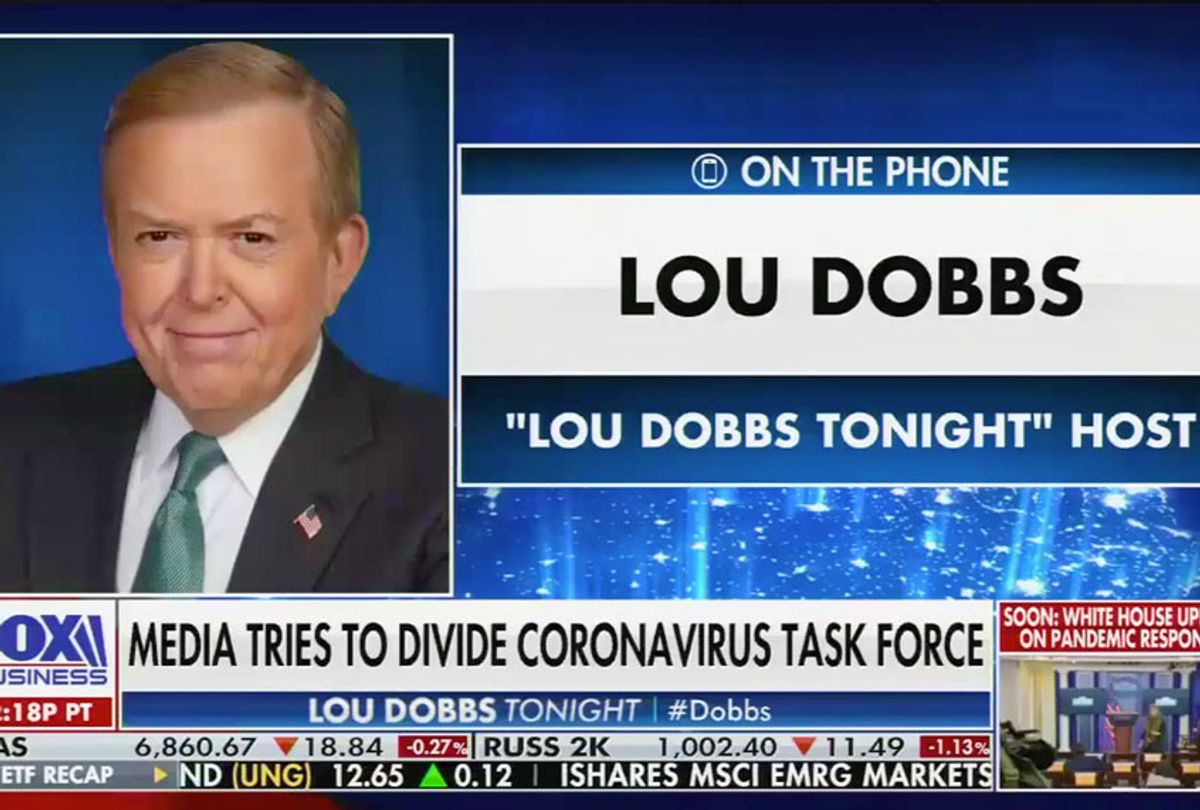 Fox Business host Lou Dobbs told viewers Monday night that President Donald Trump, who has no medical background, was "exactly right" about unproven drug treatments for the new coronavirus, and Dr. Anthony Fauci, who is the nation's top doctor on infectious diseases, was "wrong."

Dobbs told David Asman that "the president has been exactly right about those two drugs," in reference to azithromycin, which is used to treat upper respiratory infections, and hydroxychloroquine, which is used to treat ailments like lupus and malaria. Dobbs described the latter as "just amazing," adding that the president was correct to hype its potential benefits. (Asman guest hosted the program as Dobbs self-quarantined "out of an abundance of precaution" after a staff member was diagnosed with the virus.)

"He's speaking as the president of the United States,," Dobbs said of Trump, "whose responsibility is for the lives and safety of millions of Americans."

The Fox Business host mentioned an anecdotal report in the New York Post about a Florida man, who claims that the anti-malaria drug saved him his life. He added that there was "a study in France, which nearly every expert says is the basis to proceed directly."

The French study cited by The Wall Street Journal found that hydroxychloroquine was able to treat a small number of coronavirus patients within six days when used in combination with the antibiotic azithromycin. At the same briefing that Trump first brought up chloroquine, Fauci rejected the claim that the drug showed potential as an effective prophylactic measure to treat the virus.

"The answer is no," he said. "The evidence you're talking about . . . is anecdotal evidence . . . It was not done in a controlled clinical trial, so you really can't make any definitive statement about it."

Before Dobbs praised Trump's public show of support for the unproven drug treatments, Asman said "there's also this repeated attempt to drive a wedge between Anthony Fauci" and the president.

"It's wonderful to see those attempts fall flat," he added. "When Dr. Fauci comes up and says, 'That's absolutely not true.'"

The New York Times reported Monday that Trump was growing dissatisfied with Fauci repeatedly correcting him. Fauci did not join the president on the briefing podium Monday after the immunologist recently told Science magazine over the weekend that Trump's views were "expressed in a way that I would not express it, because it could lead to some misunderstanding about what the facts are about a given subject."

Fauci told WMAL's Mornings on the Mall on Tuesday that stories playing up his disagreements with the president were "not helpful."

"I would wish that that would stop, because we have a much bigger problem here than trying to point out differences," he added.

You can watch the full video via Media Matters for America: