“Trump kept saying it was basically a cure," the man's wife said. "Don’t believe anything that the president says" 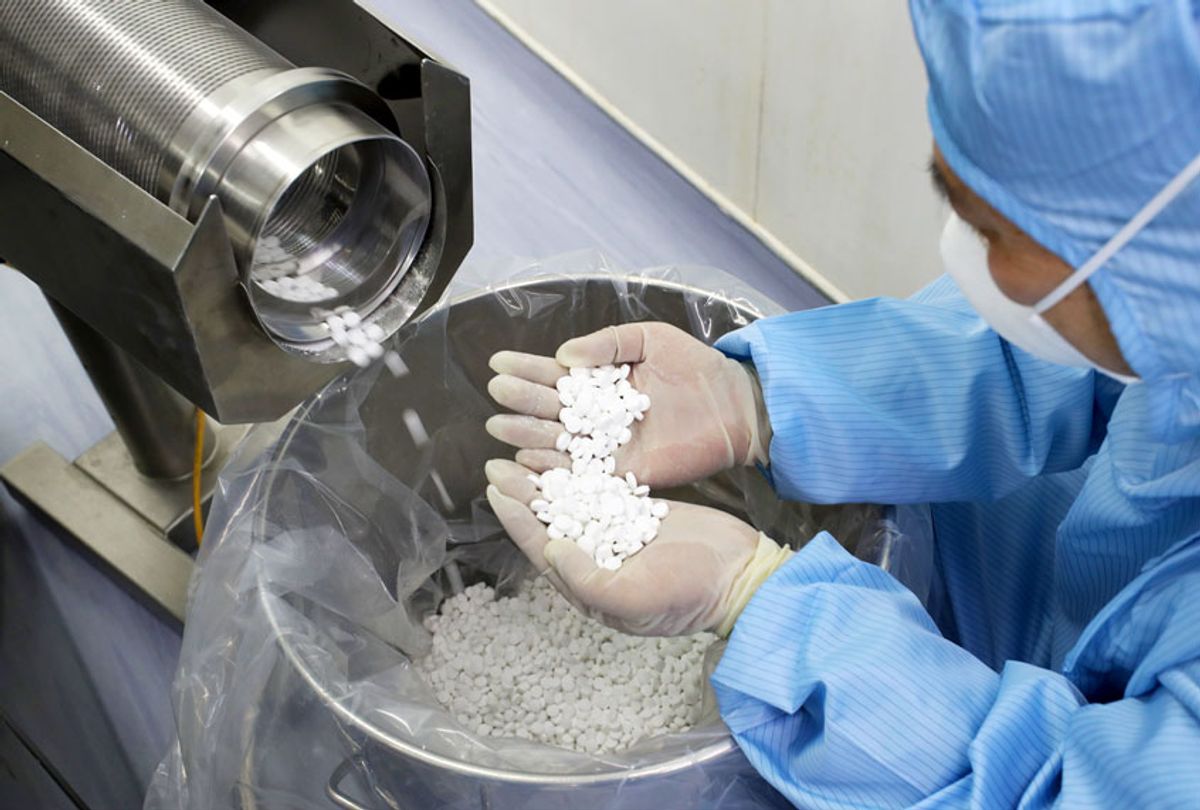 An Arizona man died after ingesting a fish tank cleaner that contained chloroquine phosphate after President Donald Trump hyped an unproven drug treatment for the new coronavirus in spite of the warnings of Dr. Anthony Fauci.

The unidentified man and his wife, both in their 60s, heard Trump talk up the potential benefits of hydroxychloroquine, a drug traditionally used to treat malaria, the wife told NBC News. She said the name sounded familiar, because she previously used a cleaner containing chloroquine to treat her koi fish for parasites.

"I saw it sitting on the back shelf and thought, 'Hey, isn't that the stuff they're talking about on TV?'" she told the network.

The man's wife, whose identity was withheld, said she mixed a small amount of the cleaner with a liquid. They both drank it to "prevent the coronavirus," because "we were afraid of getting sick."

But within 20 minutes, the couple became "extremely ill."

"I started vomiting," the woman told NBC News. "My husband started developing respiratory problems and wanted to hold my hand . . . I was having a hard time talking, falling down."

Her husband died after being taken to the hospital. She remains in critical care.

Banner Health told the outlet that the couple confused an additive called chloroquine phosphate with the medication discussed by Trump.

"It's incredibly dangerous and foolish for people to be doing this," Dr. Daniel Brooks, the medical director of the Banner Poison and Drug Information Center, warned in an interview with The New York Times. "This is not going to be a magic pill for us to get us through this . . . You need to listen to the scientists."

The unidentified woman blamed Trump for her husband's death in an interview with NBC News' Vaughn Hillyard.

Trump has brought up chloroquine several times as a possible treatment for COVID-19 at his White House press briefings. New York Gov. Andrew Cuomo, a Democrat, has also expressed optimism about starting a drug trial to see if it is effective in treating coronavirus symptoms.

Trump said Monday that some medical experts believe that some African counties have seen lower rates of coronavirus infections, because the drug is commonly used on the continent. But the drug is just one of 69 medications scientists have identified to test against the virus — not a prescribed cure.

At the same briefing that Trump first brought up chloroquine, Fauci, the director of the National Institute of Allergy and Infectious Diseases, rejected the claim that the drug showed potential as an effective prophylactic measure to treat the virus.

"The answer is no," he said. "The evidence you're talking about . . . is anecdotal evidence . . . It was not done in a controlled clinical trial, so you really can't make any definitive statement about it."

After Trump's briefing, Nigeria reported two fatal overdoses of chloroquine. The country's top health officials warned that the World Health Organization "has NOT approved the use of chloroquine" for coronavirus symptoms and urged the public not to "engage in self-medication," because it could "cause harm and can lead to death."

But despite medical warnings, drug manufacturers have been overwhelmed with demand for the drug ever since Trump began touting it. As a result, patients who take the drug to treat approved conditions such as lupus and rheumatoid arthritis have been left unable to obtain their prescriptions, according to ProPublica.

Surgeon General Jerome Adams warned that the drug still needs to be studied and was not a practical treatment for most people.

"Here is the thing about those drugs: There is may and actually does. These may be promising, so we are trying to make them as available as possible to people across the country. We need to verify through studies that they actually work," he told Fox News. "It's not practical to think we are going to treat our way out of this problem with new drugs or with ventilators or with supplies. We need to lower demand. We need more people talking about staying at home."

But Trump has publicly pushed to lift restrictions asking people to stay at home to contain the spread of coronavirus, arguing that it is more important to restore the economy.

"Our country wasn't built to be shut down," Trump said Monday. "America will again — and soon — be open for business. Very soon. A lot sooner than three or four months that somebody was suggesting. Lot sooner. We cannot let the cure be worse than the problem itself."

Trump's comments echoed a growing number of conservative lawmakers who say they are willing to let higher numbers of people die if it means saving the economy.

"Those of us who are 70 plus, we'll take care of ourselves. But don't sacrifice the country," Texas Lt. Gov. Dan Patrick told Fox News on Monday. "No one reached out to me and said, 'As a senior citizen, are you willing to take a chance on your survival in exchange for keeping the America that America loves for its children and grandchildren?' And if that is the exchange, I'm all in."

The push to reopen the economy comes as the U.K., who sought to keep lax restrictions amid a growing number of coronavirus cases, was forced to implement a total lockdown that is expected to last for six months. Numerous other nations are preparing for a months-long battle against the coronavirus. Japan agreed to delay this summer's Olympic games for one year.

But the U.S. risks becoming the new epicenter of the outbreak, according to WHO.

"We are now seeing a very large acceleration in cases in the U.S. so it does have that potential," WHO spokeswoman Margaret Harris said, according to Reuters. "They have a very large outbreak and an outbreak that is increasing in intensity."

Adams warned over the weekend that Americans need to prepare, because "the numbers are going to get worse this week."

"It's reasonable to plan for the US to top the list of countries with the most cases in approximately 1 week," he tweeted. "This does NOT make social intervention futile. It makes it imperative!"

Former Food and Drug Administration Commissioner Scott Gottlieb also warned his former boss on Twitter that "it should not be lost on anyone that there's no such thing as a functioning economy and society so long as COVID-19 continues to spread uncontrolled in our biggest cities."

"So long as COVID-19 spreads uncontrolled, older people will die in historic numbers, middle aged folks doomed to prolonged ICU stays to fight for their lives, hospitals will be overwhelmed, and most Americans terrified to leave homes, eat out, take the subway, or go to the park," he wrote. "There are two ways to end this. Let a vast swath of people catch COVID which is unthinkable, or break the epidemic. We must choose the latter."

Fauci, the top infections disease expert in the country, has spoken out against Trump's plan to quickly reopen the economy, warning administration officials and Republican lawmakers that scaling back social-distancing measures would "hamper efforts to mitigate the virus and would devastate hospitals," according to The Washington Post.

"It would be a major mistake to suggest any change of course when it comes to containment," Sen. Lindsey Graham, R-S.C., told the outlet. "I just spoke with Dr. Fauci — he believes that, if anything, we should be more aggressive and do more . . . You can't have a functioning economy if you have hospitals overflowing. People aren't going to go to work like that."

But after openly discussing his attempts to fact-check Trump's misleading statements in an interview with Science magazine, Trump may be "losing his patience" with Fauci, according to The Times.

Trump has "given more leeway" to Fauci to contradict him, because he knows the doctor is seen as credible, wrote The Times' Maggie Haberman, but the president's patience has "started to wear thin" after Fauci was seen as "taking shots" at Trump in his interviews.