Trump's businesses have been hit hard by the coronavirus, but the Senate stimulus bill bars him from bailout funds 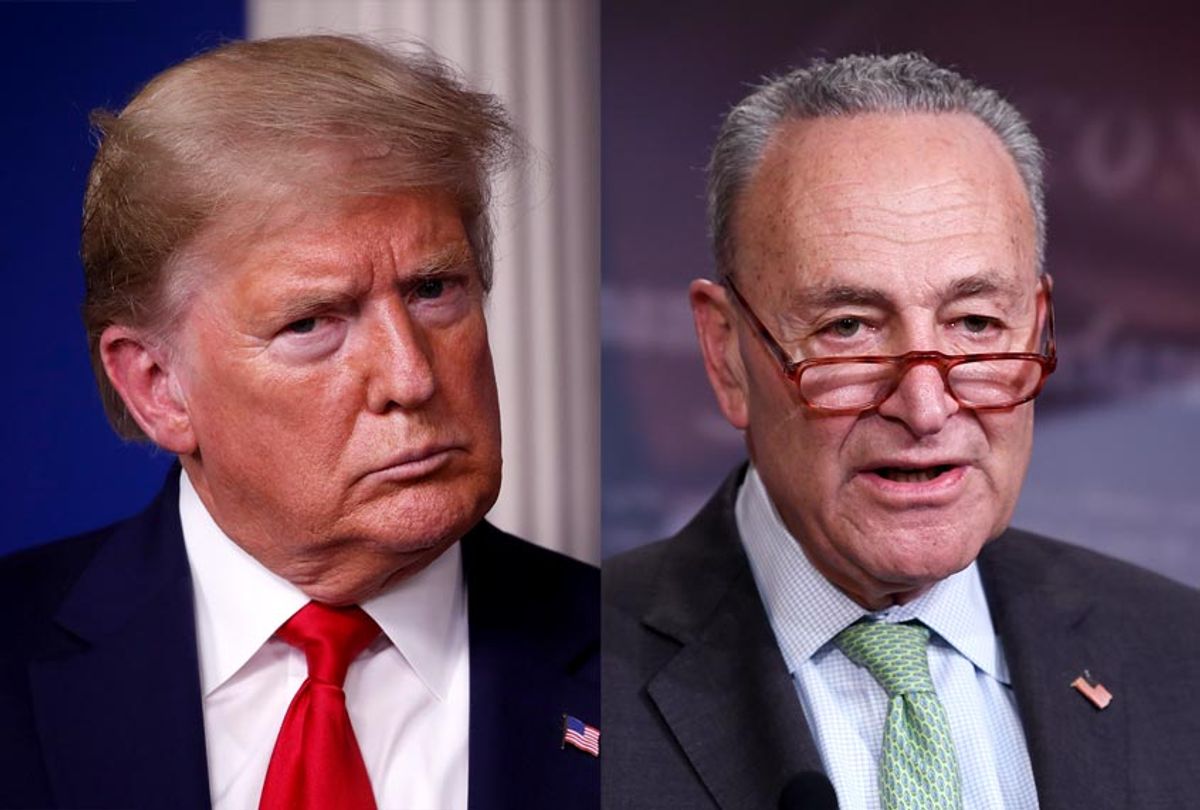 Schumer's office said the provision blocks businesses owned by Trump, his family, Vice President Mike Pence, Cabinet officials and members of Congress from receiving loans from a $500 billion fund that would be distributed by the Treasury Department, according to Reuters.

Democrats also secured a provision in the $2 trillion coronavirus stimulus bill that would provide strict oversight rules for the bailout funds, Schumer said.

The bill, which is the largest relief package in history, includes the bailout funds for hard-hit industries, direct payments of $1,200 per adult and $500 per child to most Americans, $350 billion for small business loans, $250 billion in expanded unemployment insurance, $100 billion for hospitals and $150 billion to help states and local governments. It is expected to be approved later Wednesday.

The legislation comes as Trump pushes to lift social distancing restrictions against the advice of medical experts in an effort to boost businesses. The call to ease restrictions came as the Trump Organization was forced to shutter six of its seven top-earning golf clubs due to government guidelines, The Washington Post reported. Trump held on to his businesses after he assumed the office of the presidency.

The Trump Organization has been forced to shutter its Doral and Mar-a-Lago clubs in Florida, as well as locations in Bedminster, N.J., Las Vegas, Ireland and Scotland. The closures are estimated to cost about $478,000 per day, according to the report.

Trump's properties in Chicago, New York and Washington remain open, though they have reportedly lost key sources of revenue after occupancy fell and the properties were forced to shut down their restaurants. The Washington hotel has already laid off 160 people, and the New York hotel has laid off at least 51 workers.

John Boardman, who heads the Washington branch of the Unite Here labor union, said that the company has refused to shutter its local hotel despite plummeting occupancy.

"It doesn't make sense for them to stay open. The hotel has like 3% occupancy," he told AFP. "He may not be shutting it down just to be able to say they are still operating."

Easing restrictions on the public could help revive the properties, but doing so while the virus continues to spread likely would not help much, warned Jan Freitag, a senior vice president at STR, which analyzes hotel industry data.

"If people are on the roads, and the virus continues to spread, you basically have a two-class society, right? The people who had it, and the people who don't have it," he told The Post. "It's going to be hard to convince those who haven't had the virus to get back on the road."

But even as experts pushed back on Trump's call to revive the economy, the president declared on Tuesday that he wants to see businesses "opened up and just raring to go" by Easter. Members of his coronavirus task force have declined to say publicly whether his timeline is "realistic."

Business leaders warned that reopening companies prematurely would hurt — not help — the economy. Microsoft co-founder Bill Gates called for tightening restrictions rather than easing them.

"We need to shut down so that the worst case that was happening in [Wuhan, China] or Northern Italy — that we avoid that," he said Tuesday. "It's very tough to say to people, 'Hey, keep going to restaurants. Go buy new houses. Ignore that pile of bodies over in the corner.'"

Gates' call for a national shutdown was echoed by The New York Times editorial board.

"Rather than raising false expectations of a rapid and full return to business as usual, the president needs to be pursuing even more drastic measures," it argued. "He should announce that, within 24 hours, all nonessential businesses should be shut and residents directed to remain in their homes except for vital trips out, such as to obtain food or medical care."

Members of both parties have warned against prematurely lifting restrictions.

"Let's be realistic: This curve is going up, and up and up, because we did not act when we should have acted," former Vice President Joe Biden told MSNBC.

"There will be no normally functioning economy if our hospitals are overwhelmed and thousands of Americans of all ages, including our doctors and nurses, lay dying because we have failed to do what's necessary to stop the virus," Rep. Liz Cheney, R-Wyo., the No. 3 Republican in the House, tweeted.

Governors from both parties have pushed back on the idea that their states may be ready to lift restrictions within a few weeks.

"If you ask the American people to choose between public health and the economy, then it's no contest. No American is going to say accelerate the economy at the cost of human life," New York Gov. Andrew Cuomo said Tuesday. "Job one has to be save lives — that has to be the priority."

Cuomo and other governors have repeatedly called on the Trump administration to send more ventilators and supplies from the national stockpile and to invoke the Defense Production Act to require companies to manufacture necessary equipment to deal with the crisis.

"What are we going to do with 400 ventilators when we need 30,000 ventilators? You're missing the magnitude of the problem," Cuomo said Tuesday. "You pick the 26,000 people who are going to die."

Trump told Fox News after Cuomo's news conference that governors must be nice to him in order to obtain help.