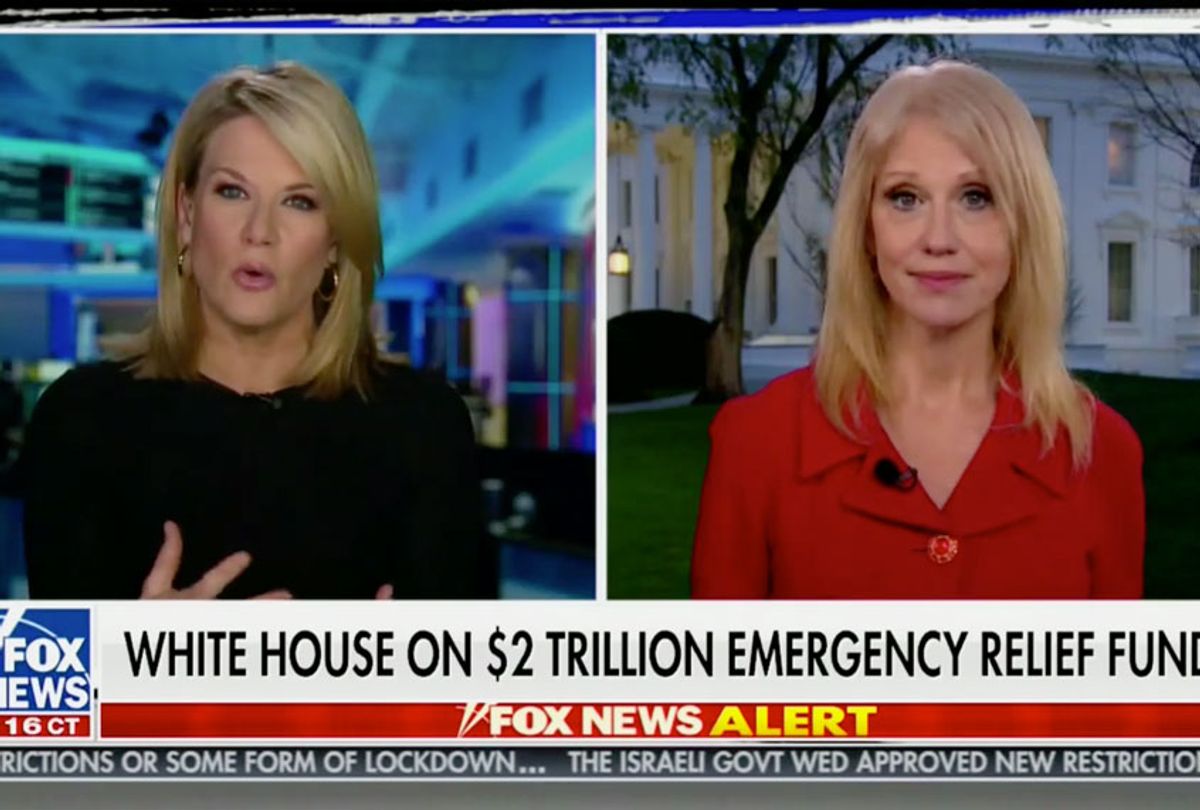 Conway claimed that de Blasio "lied to America" by saying he had "been on top of this from the beginning," pointing to a tweet from the first week of March in which the mayor wrote: "Since I'm encouraging New Yorkers to go on with your lives + get out on the town despite Coronavirus, I thought I would offer some suggestions. Here's the first: thru Thurs 3/5 go see "The Traitor" @FilmLinc. If "The Wire" was a true story + set in Italy, it would be this film."

The White House counselor also skewered de Blasio for continuing to go to his preferred gym as businesses throughout the city were closing down due to the outbreak.

MacCallum agreed that de Blasio was not broadcasting "a very positive message in terms of how he's going to guide the city through all of this," but she pointed out to Conway that the mayor's initial optimism did not differ from that of President Donald Trump.

"In terms of the things that you're mentioning, it would probably match up — some of those early March statements from [de Blasio] — with also similarly optimistic statements from President Trump," the Fox News host said. "Although, they've handled it very differently since then."

After Conway insisted that there was "no comparison," MacCallum responded: "In terms of, 'Get out, and live your life and go ahead and do what you're doing?' Back in early March?"

"Let me just be clear that I'm referring to sort of early statements about, you know, 'Get out there, keep living your life, all of that kind of thing,'" the Fox News host added.

It is true that Trump repeatedly downplayed the threat to Americans during the early stages of the outbreak. He claimed in January that the U.S. government had the virus "totally under control." He said in February that America had "pretty much shut it down coming in from China," downplayed the number of Americans who had the virus, claimed that it was "very much under control" and insisted that "the risk to the American people remains very low." Even after being briefed that an American who was not tied to foreign travel had contracted the virus, Trump continued to insist that the country not worry.

The president continued to push that narrative through early March, tweeting that "we did an interview on Fox last night, a town hall. I think it was very good. And I said, 'Calm. You have to be calm. It'll go away.'" Trump also falsely attributed the coronavirus panic to Democratic efforts to defeat him in the upcoming election, tweeting on Wednesday that "the LameStream Media is the dominant force in trying to get me to keep our Country closed as long as possible in the hope that it will be detrimental to my election success. The real people want to get back to work ASAP.  We will be stronger than ever before!"

Salon's Amanda Marcotte summed up "the biggest screw-up" of Trump's bungled response to the pandemic.

"The biggest screw-up that caused this situation was Trump's belief that any problem can be made to go away by simply lying about it and denying it," she wrote Wednesday. "To that end, he did everything he could to hide the fact that the coronavirus had already reached the U.S. — and by trying to hide the problem, he allowed the virus to spread unchecked through the population. Now it's too late to do anything but embrace drastic lockdown procedures nationwide, which are grinding the economy to a halt and, likely kickstarting what will amount to another Great Depression."

MacCallum spoke with Salon last year when Fox News hosted a town hall with one of the Democratic presidential candidates, Sen. Bernie Sanders of Vermont.

"I think every candidate should want to talk to all viewers wherever they are," she said at the time. "We have a large independent audience. We have Democrats. Obviously we have a lot of Republicans who watch Fox News. But to ignore that sector of the huge viewership that we have, I think, is a mistake. I think it is a very smart move on his part as a politician to make sure that he is talking to everybody."