Fox News' Brit Hume: "Entirely reasonable" for elderly to risk getting coronavirus to save economy 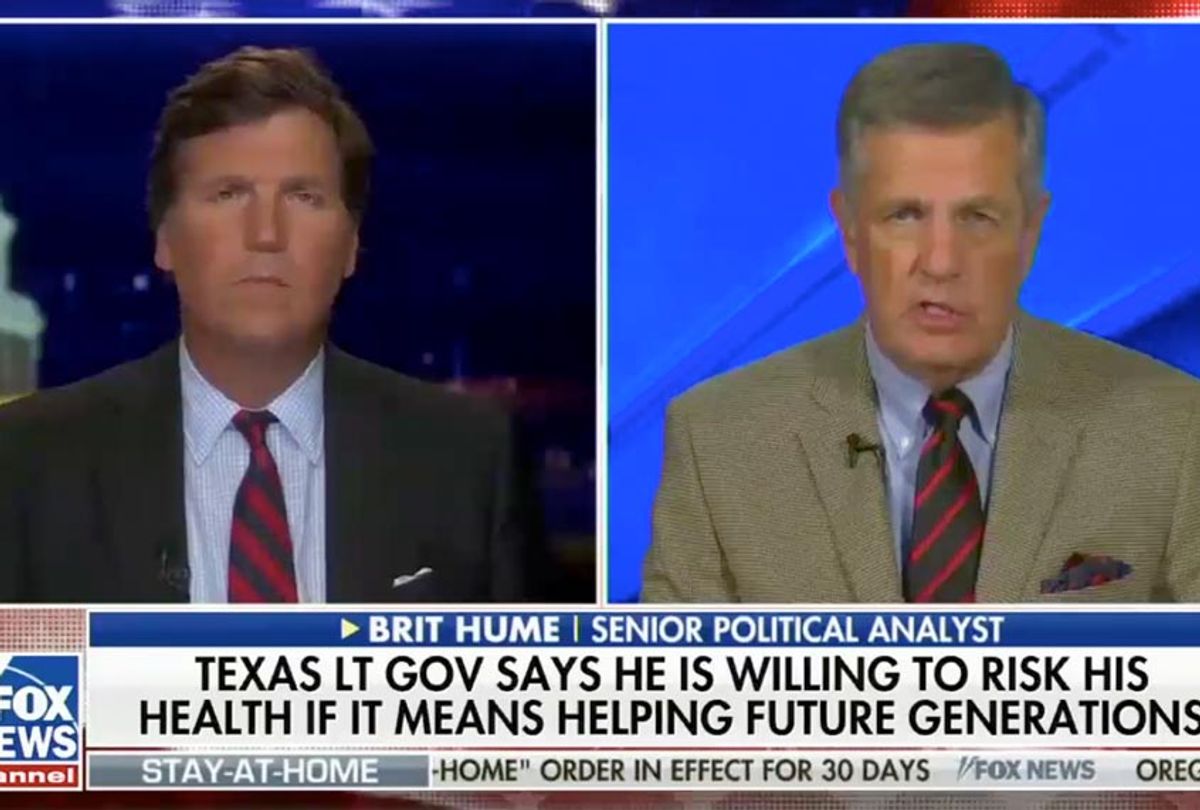 Brit Hume told his Fox News colleague Tucker Carlson that it was "an entirely reasonable viewpoint" to propose that older Americans risk their lives in order to save the economy. And the network's senior political analyst suggested that anyone who disagrees does so because they dislike President Donald Trump.

Hume's remarks came after Carlson played a clip of Lt. Gov. Dan Patrick, a Republican from Texas, who said earlier this week that "those of us who are 70-plus, we'll take care of ourselves. But don't sacrifice the country." Patrick argued that if the nationwide shutdown continues for "another several months, there won't be any good jobs to come back to for many people."

"What we're living in now, this circumstance as we try to beat this virus, is not sustainable — that the utter collapse of the country's economy, which many think will happen if this goes on much longer, is an intolerable result," Hume told Carlson on Tuesday night. "And that — he is saying, for his own part, that he'd be willing to take a risk of getting the disease if that's what it took to allow the economy to move forward. And he said that because he's late in life, you know, that he would be perhaps more willing then he might've been at a younger age, which seems to me to be an entirely reasonable viewpoint."

When Carlson asked why some Americans disagree, Hume speculated that "there's one thing I do suspect in all of this in terms of the reactions to it: We are living in a country in which people's reactions to nearly everything have something to do, when you drill down, with how they feel about Donald Trump."

Hume and Patrick are not the only prominent conservatives to argue that older Americans should risk their lives to protect the economy or that the "cure" to the pandemic is as dangerous as the outbreak itself. BlazeTV host Glenn Beck told viewers of his eponymous show Tuesday that "I would rather have my children stay home and all of us who are over 50 go in and keep this economy going and working. Even if we all get sick, I'd rather die than kill the country."

President Donald Trump, repeating a point made by Fox News host Steve Hilton, tweeted on Sunday night that "WE CANNOT LET THE CURE BE WORSE THAN THE PROBLEM ITSELF. AT THE END OF THE 15 DAY PERIOD, WE WILL MAKE A DECISION AS TO WHICH WAY WE WANT TO GO!"

Hilton argued on his program earlier in the evening, "You know that famous phrase? 'The cure is worse than the disease.' That is exactly the territory we are hurtling towards."

Trump expressed a similar thought on Wednesday, tweeting that "the LameStream Media is the dominant force in trying to get me to keep our Country closed as long as possible in the hope that it will be detrimental to my election success. The real people want to get back to work ASAP.  We will be stronger than ever before!"