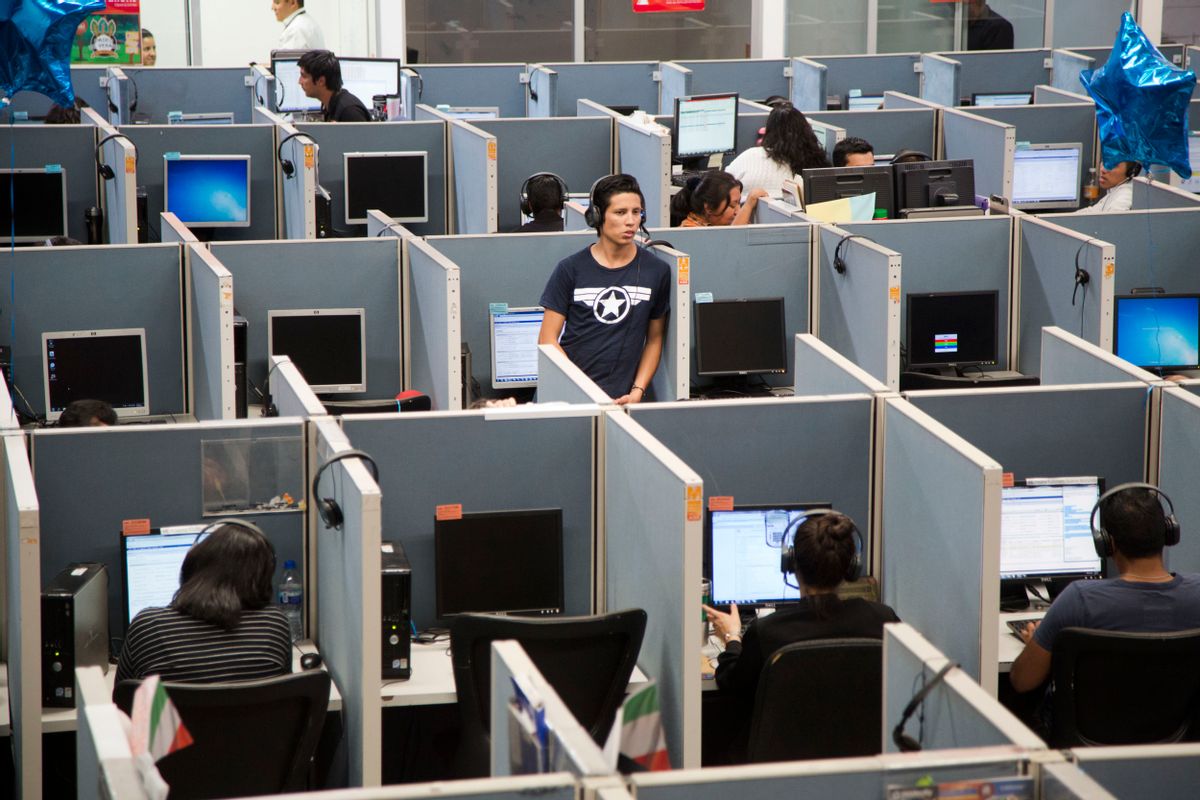 In this Aug. 13, 2014 photo, a man stands in the middle of the Firstkontact Center, a call center in the northern border city of Tijuana, Mexico. Many Mexicans deported under U.S. President Barack Obama are finding employment in call centers in Tijuana and other border cities. In perfect English, some dont even speak Spanish, they talk to American consumers who buy gadgets and gizmos, have questions about warrantees and complain about overdue deliveries. The call center industry has prospered in Mexican border cities as deportations spiked under U.S. President Barack Obama. (AP Photo/Alex Cossio) (AP)
--

As the coronavirus has shuttered swaths of America's offices, many workers in corporate call centers say they are still expected to work, risking their own health. Call centers have been deemed "essential" by the Department of Homeland Security, but employees with little paid sick leave say they feel forced to work, in constant fear of infection, in order to keep customer service lines functioning smoothly.

Late last week, as states from coast to coast closed businesses in order to try to restrain the spread of the disease, call center workers across the country told In These Times that their jobs were continuing. Many said that the policies instituted by their employers were wildly insufficient for protecting employees from the scale and danger of this pandemic. One person who works as a customer service rep at a Kansas call center for the government contractor Maximus, said that employees were told late last week that they could apply for leave for childcare reasons after schools shut down, but that the process was broken.

"After applying online I immediately received an email from Maximus saying that I didn't qualify for the leave. My supervisor told me to talk to human capital (that's what they call HR now) about it, but they wouldn't speak to me. They said they would only take appointments. I applied for an appointment twice and got no response," the employee said on Friday. "We were also told to tell our supervisors if we were sick. I have symptoms of a cold right now, which I relayed to my supervisor. We assumed they were going to send everyone who was sick home, but human capital never responded. And I'm still scheduled to go into work tomorrow."

Cassie Ludwig, who works at a Maximus call center in Kentucky, said that she is required to work 30 hours a week to qualify for health insurance, and now she fears losing it when she needs it most. "I got a schedule change because the schools in our area are closed due to COVID-19, but if I don't work the minimum hours and fall ill, I won't be able to afford treatment." (A Maximus spokesperson said that the company's updated sick leave grants up to 80 hours of paid leave to employees who are self-quarantined or forced to care for sick family members, and that "if an employee needs to take COVID related leave their health insurance coverage continues.")

Several call center workers for Wells Fargo spent last week grasping for clarity on whether they could keep themselves safe without facing unemployment. Last Wednesday, an employee at a Wells Fargo call center in Minneapolis was desperate enough that she was emailing any news outlets she could find, concerned about the health of her husband, who was working in conditions she said were "definitely closer than they should be." Her husband was later granted 14 days of paid sick leave due to a health condition, but other employees at the call center remain on the job.

There was similar uncertainty in other locations, according to Patrick Creaven, a member of the Committee for Better Banks who works at a Wells Fargo "contact center" in Concord, California that handles customer service. At the end of last week, Creaven said, some though not all of the several hundred employees in the building were told they could work from home—theoretically. "My colleagues and I in the Social Care department could work from home if we were given laptops, but they are currently not available. We've been told the bank is working on securing them for us, but there's a backlog," he said. "Overall, the workplace this week is very similar to the workplace we had pre-coronavirus."

Creaven said that he and his colleagues are typically given three paid sick leave days a year; Wells Fargo has told them that if they test positive for coronavirus, or are deemed to be at high risk as defined by the CDC, they can file to receive 14 days of paid leave.

"Some Wells Fargo employees who support critical operations, including contact centers, must be onsite in order to serve our customers," said Wells Fargo spokesman John Hobot. "As the situation evolves quickly, we continue to explore alternatives, and are taking significant actions to ensure the safety of our team while ensuring customers are provided the services they need." He added that the company is updating policies, "including benefit enhancements specifically for employees directly affected by coronavirus through illness or school closures."

A steady theme from call center employees over the past week has been that the reactive measures taken by their employers in response to the pandemic have not been enough to reassure them that they are not placing their lives on the line for their relatively low-paying jobs. An employee at a Consumer Cellular call center in Arizona who expressed fear of infection last week told In These Times that he has now left the job, making the calculation that the health risk was too great. "I am of the opinion that states like mine that are oversaturated with mega call centers are putting an untold number of lives at risk by allowing them to continue to operate," he said.

Call center workers themselves are the strongest believers that they should all be working from home, rather than being forced to choose between coming into crowded offices or lose their livelihoods. "We need to be allowed to work from home to prevent people from catching the virus, as a precautionary measure—not as a reactionary one," said the Wells Fargo worker Patrick Creaven. "I'm very worried. Government agencies have told us to 'shelter-in-place' to prevent the spread of the virus. Going into a building with hundreds of people in it, opening the same doors and touching the same elevator buttons, has suddenly become terrifying. I feel like it's not a matter of if, but when someone becomes sick."