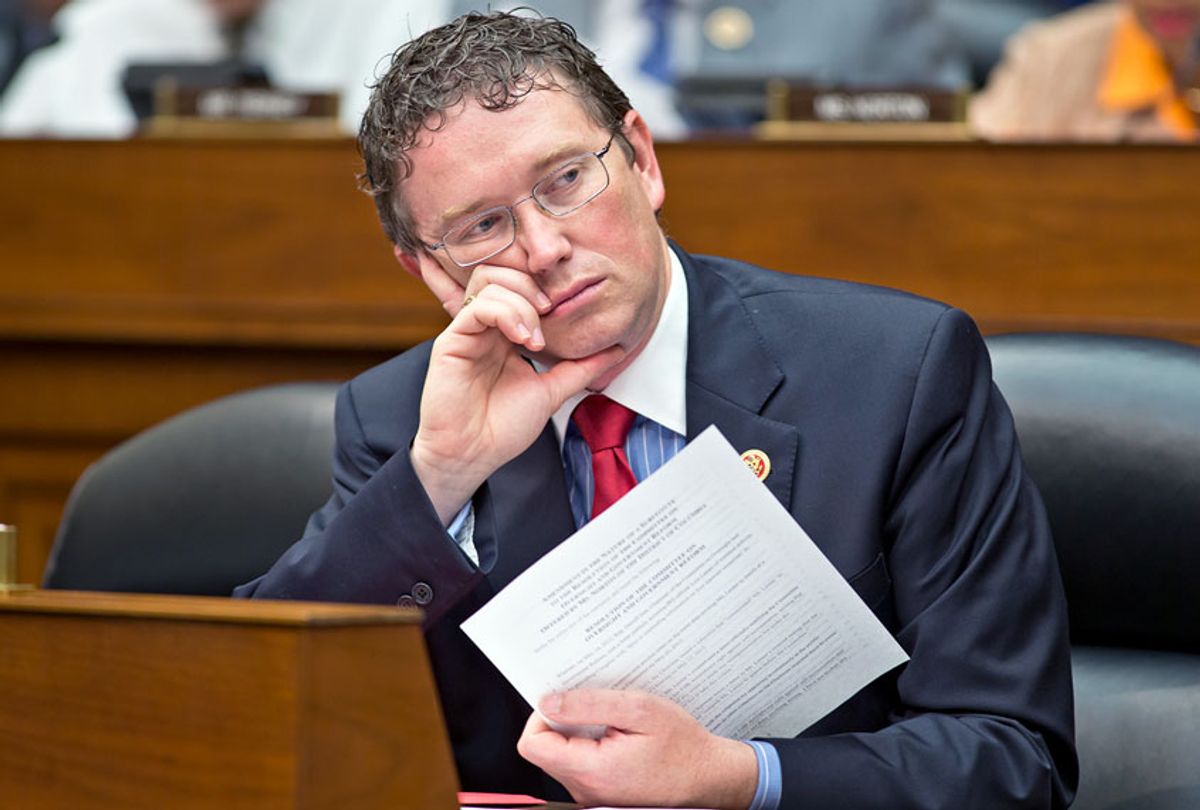 The House of Representatives passed a $2 trillion stimulus bill Friday aimed at easing the economic havoc sparked by the coronavirus pandemic after a lone Republican dissenter forced members to risk infection as they rushed back to Washington for the historic vote.

With most House members home after leaving Washington weeks earlier, the House planned to pass the legislation via voice vote after the Senate approved it 96-0. The bill, which now heads to President Donald Trump's desk for his signature, would provide direct payments to Americans, expand unemployment insurance and provide billions in loans to corporations and small businesses.

A voice vote would have allowed the bill to easily pass with bipartisan support, but any individual member can stand in opposition by requiring a roll call vote. Rep. Thomas Massie, R-Ky., told a local radio station that was exactly what he planned to do, The Louisville Courier-Journal reported.

"If it were just about helping people to get more unemployment (benefits) to get through this calamity that, frankly, the governors have wrought on the people, then I could be for it," Massie said.

Massie dismissed concerns over the safety of his fellow colleagues in the lower chamber.

At least 218 members need to be present in order to reach a quorum.

After Massie's remarks, House Majority Leader Steny Hoyer, D-Md., warned members that "it is possible this measure will not pass by voice vote."

The guidance triggered a mad dash by members of both parties to risk infection as they travelled back to the nation's capital, some in spite of advice to shelter at home. Rep. Ben McAdams, D-Utah, and Rep. Mario Diaz-Balart, R-Fla., have already tested positive for COVID-19. Rep. Katie Porter, D-Calif., and Rep. Ayanna Pressley, D-Mass., are among dozens of other members of Congress who are currently self-isolating as they await test results.

"If you intend to delay passage of the #coronavirus relief bill tomorrow morning, please advise your 428 colleagues RIGHT NOW so we can book flights and expend ~$200,000 in taxpayer money to counter your principled but terribly misguided stunt," Rep. Dean Phillips, D-Minn., tweeted.

"I am jumping on the red eye tonight... thanks Massie," Rep. Ruben Gallego, D-Ariz., wrote.

"Heading to Washington to vote on pandemic legislation," Rep. Peter King, R-N.Y., added. "Because of one Member of Congress refusing to allow emergency action entire Congress must be called back to vote in House. Risk of infection and risk of legislation being delayed. Disgraceful. Irresponsible."

Trump assured reporters Thursday that the bill would pass regardless, but warned there could be "one grandstander." The president then furiously demanded Friday that the Republican Party boot Massie, calling him a "third rate grandstander."

"He just wants the publicity. He can't stop it, only delay, which is both dangerous & costly," Trump tweeted. "Workers & small businesses need money now in order to survive. Virus wasn't their fault. It is 'HELL' dealing with the Dems, had to give up some stupid things in order to get the 'big picture' done. 90% GREAT! WIN BACK HOUSE, but throw Massie out of Republican Party!"

Trump later added that Massie was a "do nothing Kentucky politician" and a "disaster for America."

Republicans expressed frustration with Massie, telling Fox News that Republican leaders "tried every type of arm twisting" to no avail.

"A lot of members are pissed off," a Trump administration source told the outlet.

"I'm coming to D.C. to ensure the bill passes," added an unnamed Republican House member. "It's frustrating having to be prepared for this scenario . . . I really wish members would put people first and just get this done. Heck, if 100 percent of senators can agree, it's pretty clear this is going to pass. Only thing a member would be doing is holding it up at great risk to the American people. It's very troublesome a member of Congress would engage in such a tactic."

Rep. Dan Kildee, D-Mich., did not hold back in telling CNN exactly what he thought of Massie's stunt.

"It's an act of vanity and selfishness that goes beyond comprehension . . . But the fact that he would put people who are at risk . . . in order to satisfy his vanity is a pretty pathetic reflection on his character," he said. "He should be ashamed of himself, and the country should scorn him."